An unjustly forgotten mid-century satirist infused his tales with fantasy and irony. 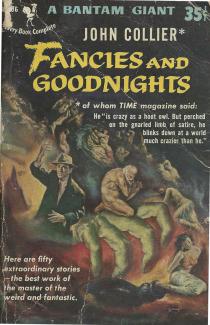 Actually, I suppose that any work deemed worthy of a New York Review Books release can’t accurately be called forgotten, exactly, but still – where’s the love? It’s entirely appropriate that Ray Bradbury introduces the latest edition of Collier’s classic short story collection, originally published in 1951. Upon entering Collier’s world, one of my initial thoughts was, “It’s like Bradbury, but with less nostalgia, and more biting wit!” In truth, Collier probably has more in common with Roald Dahl, and, interestingly, all three men contributed to Alfred Hitchcock Presents in the 50’s and 60’s.

These are stories that can’t quite be called any one thing; they’re sometimes scary, occasionally sweet, often amusing, and almost always unpredictable. The slightly twisted scenarios and the characters that inhabit them are deftly imagined and frequently outlandish. Most of Collier’s best work is here in Fancies and Goodnights, although much of it originally appeared in The New Yorker in the 30’s and 40’s. All fifty tales are enjoyably strange, but a few favorites are called for:

"Are You Too Late or Was I Too Early"

Keep in mind this collection won both an Edgar Award and an International Fantasy Award in 1952. As if you needed any more reasons to check it out.

Roald Dahl's Tales of the Unexpected