How did a Nashville woman end up on a piece of communist propaganda during the Korean War?

The answer is still unclear, but a series of photographs helps us trace the story.

Harold Stahlman was a World War II veteran and native of Niagara Falls, New York. Harold rejoined the military in 1949, and when hostilities broke out in Korea in 1950, he was among the first troops sent overseas, serving as a first lieutenant with an anti-aircraft battalion of the Second Infantry Division.

His wife, Jacquelyn, stayed with her parents in Nashville during his deployment. Just a few months after he arrived in Korea, Harold was captured by the North Koreans near the Yalu River on December 1, 1950. As the year turned, Jacquelyn gave birth to their son, Philip, just days after she received word that Harold was missing in action. It wasn't until July 1951 that she learned he had been taken prisoner. 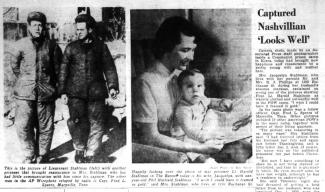 In January 1952, Jacquelyn received a wirephoto, showing her husband walking and apparently well-clothed, giving her reassurance about his treatment, health, and well-being. The photo appeared in the Nashville Banner on January 26, with a story about Jacquelyn's reaction, and an image of her and their young son.

Harold's photo came about because an Associated Press (AP) photographer, Frank Noel, was also imprisoned in the same camp. Apparently the communists allowed Noel the use of a camera in an effort to persuade American officials that prisoners of war (P.O.W.'s) were not being mistreated.

The Tennessean also ran a story about Jacquelyn's receipt of the wirephoto, and they took credit for some of her joy: "Staff photographers of the Nashville Tennessean made prints especially for the family as soon as the wirephoto was received." The Tennessean's photograph of her reaction appeared on the front page, and showed her smiling widely.  It was big news and a great relief - not only to Jacquelyn and her family - but to other families with loved ones in communist prison camps, who held out hope that their servicemembers were receiving similar treatment. {Copyright restrictions prevent the reproduction of this photograph, here.} 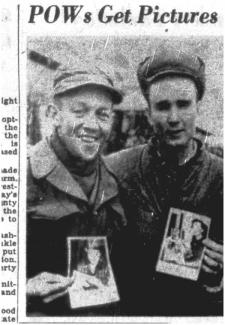 The image of Jacquelyn from the Tennessean was wired to Harold in North Korea.  He displayed it proudly as Frank Noel took another picture. This latest image was sent out on the AP wires, and made its appearance locally in the Nashville Banner on April 8.

Ironically - and in a twist that still remains  unexplained - the image of Jacquelyn that was taken in Nashville and credited to an AP photographer found its way into a piece of pro-communist propaganda, promising peace of mind to loved ones and good treatment if American soldiers would surrender. It is clearly the same image of Jacquelyn that Harold displays above, and which originally appeared in the Tennessean on January 26. 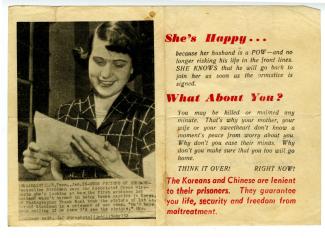 Eventually, the communist propaganda leaflet found its way into the hands of the Nashville Banner, and now is part of the Nashville Banner Reporter Reference Files in the the Special Collections Division. How it came to the Banner, and the details about its creation, remain a mystery. But we know that this story has a happy ending: Harold returned safely from the war in September 1953, having spent nearly three years in communist custody.

Learn more about the Korean War through these sources:

Remembered Prisoners of a Forgotten War

No Bugles, No Drums: An Oral History of the Korean War

The Coldest Winter: American and the Korean War