Color printing in a newspaper comic strip from 1895?! Significant examples were recently discovered in a Nashville scrapbook. 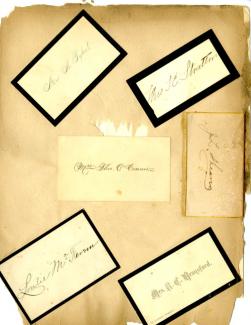 The scrapbook itself is somewhat unremarkable. Filled with pasted-down calling cards and wedding invitations from the late 1800s and early 1900s in Nashville, it makes for interesting perusal, but by and large holds nothing unusual or extraordinary. That is, until fragments of a newspaper peeped out, showing their remarkable and glorious colors. Carefully removing the crumbling newsprint, and unfolding it slowly with care, I could identify the date and newspaper: the New York Daily World, November 10, 1895. The colors were still vivid after more than one hundred years. 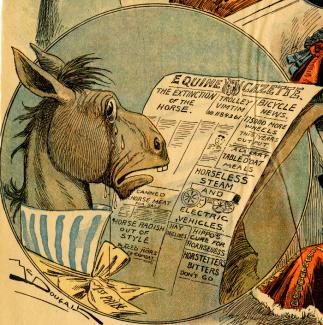 Reassembling the pages, I discovered the images were humorous drawings. One poked fun at the horse show, showing a panicked prize-winning horse, coming to terms with his impending obsolence with the advent of the "Electric Tally Ho" (a horseless carriage). Moreover, the cartoon ridiculed the horse show for becoming a place where fashion-conscious ladies and gents paraded in their finery.

Another image, from the same date, turned out to be even more fascinating and significant. "The Great Social Event of the Year in Shantytown"  was by noted cartoonist Richard Outcault. 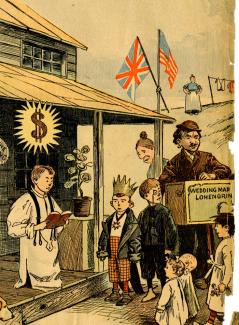 Known as the father of the American comic strip, Outcault began the strip known as "Hogan's Alley" in May 1895, just six months before the date of the item in our collection. This is one example of that strip, though the title Hogan's Alley does not appear. Severely damaged by being stored folded for over a century, and on poor quality paper to start, our copy is in four pieces, a portion of which is shown above. An intact page is held by the Billy Ireland Cartoon Library and Museum at The Ohio State University.

Prior to these discoveries and surprised by their vivid color, I thought full color printing did not come to newspapers until the mid-twentieth century. After a little research, I discovered that these are two examples of early newspaper color printing, from within the first five years of its adoption in America. That makes these items significant for two reasons. Not only are they an early example of color printing in the newspaper industry, but they also are early and important examples of American comic and cartooning history. Indeed, the "Shantytown" image is from the first six months of Hogan's Alley. Art of the Funnies: An Aesthetic History