Nashville is a city with an easily forgettable past, or rather people would prefer to forget its past. But that doesn't change the fact that it has a rather macabre and peculiar one. In Brian Allison's recently published book "Murder & Mayhem in Nashville," he highlights some of the more gruesome tales from Nashville's past.

If you're a fan of reading about bloodshed, murder, and general shenanigans, then this is definitely the book for you. My first encounter with Brian Allison's "Murder & Mayhem in Nashville" was when he spoke at April's First Tuesday at the Metro Archives event. I truly enjoyed listening to him discuss different parts of his book so animatedly, so much so - I bought the book. I'll attest that it doesn't disappoint in the entertainment or jaw-dropper categories.

For a relatively short timespan of existence as a city in the United States (relative to the rest of the world), Nashville has a past that runs as long and as deep as the Mississippi River. Well, close enough. And one of the points that Allison makes in the book is that Nashville's past is often easily forgotten.

In the introduction, he says, "ever since its beginning, the town has never really revered its past, and a sense of 'out with the old, in with the new' has always prevailed." However, based on these stories that Allison narrates with a perfect touch of humor, it's not hard to deduce why people choose to forget them. Lunacy appears to have been a constant in this city for quite some time; only difference now is that we generally express it through our driving.

Working chronologically forward, Allison starts the book out with one of Tennessee's most famous historical residents and characters - Andrew Jackson. It might be common knowledge just how much of a hothead Andrew Jackson was, but if that's news to you, definitely read the first couple of chapters. 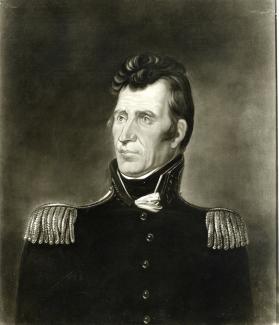 Working chronologically forward, Allison starts the book out with one of Tennessee's most famous historical residents and characters - Andrew Jackson. It might be common knowledge just how much of a hothead Andrew Jackson was, but if that's news to you, definitely read the first couple of chapters.

On a number of occasions, Jackson's temper was ignited (sometimes due to some minor pique), then resulting in a duel just across Tennessee's state lines (dueling was against the law in Tennessee). For example, the feud that was slowly developing between Jackson and Attorney Charles Dickinson ended with both men receiving dangerous wounds, one resulting in death (I bet you can guess which one).

Another incident that left a dark mark on his reputation for a time was his fight between the Benton brothers (Thomas Hart and Jesse). I had to reread this part a few times - not for any error on the author's part - but for clarity of how the fight began. To be honest, it's still hazy; someone started a conspiracy which led to a duel (that ended rather embarrassingly). Then, another accusation/feud from that duel led to a threat of Jackson's honor, I think (something you simply did not do).

It's funny to read these stories actually because we tend to hold our forefathers to a higher standard in historical text sometimes, but we forget they were humans too that enjoyed good, petty fights. What's important to learn of this fight is that Jackson came close to death again (his previous duel was a close-call for him), and almost lost his arm. The bullet lodged in his shoulder and remained there until his days as our 7th president.

But Jackson and his followers weren't the only ones causing bloodshed and tears in Nashville; the stories that follow talk about some of the most gruesome and/or mysterious crimes that occurred sometimes without punishment, sometimes punishing the wrong person, and everything in between. One theme that I noticed in many of the stories, as Allison puts it comically - "however, as always, more money meant more problems" - growth in Nashville over the last 2 centuries often caused issues somewhere.

Murder in the Hills of Little Marrowbone Creek

The last chapter in the book actually sounded highly familiar when I started reading it because it took place in my hometown of Ashland City, back in 1938 (and I may or may not have visited the site before).

For years, I thought this story was made up as a silly ghost story, but turns out it is ACTUALLY true. See the clippings below to get a few other highlights from the tragedy, but the basic gist of the case is this: 4 boys were found dead in a burned-down cabin in late January, in the woods near Little Marrowbone Creek, near Ashland City. At first, it was believed by law enforcement to simply be an accident - that they'd lit a fire and fallen asleep. But details surfaced that were too sinister to continue that belief (including the fact that 3 of the victims were decapitated - yeah, that seems suspicious), and 2 of the nearby neighbors were eventually found guilty of the boys' murders.

One of the men convicted was Lee Nesbitt - the neighbor that "happened" upon the wreckage early the next morning. Albert Davenport was the other man convicted; the 4 boys that were murdered were last seen at his home. Both of these men were indicted for first-degree murder. While they attempted to appeal the verdict, that didn't work out and they both were sentenced to 99 years each at "Old Red Top" (the former TN State Prison on the west side of Nashville).

While Nesbitt spent roughly 25 years there (quietly paroled in 1963), Davenport never emerged from the prison alive. In November, 1950, he passed away after contracting Tuberculosis.

I hope I piqued your interest; check out the book from the Library if you want to read more! 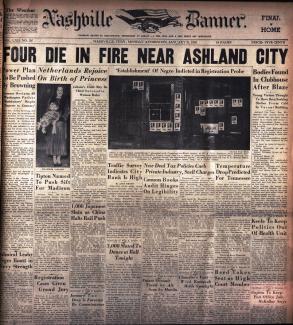 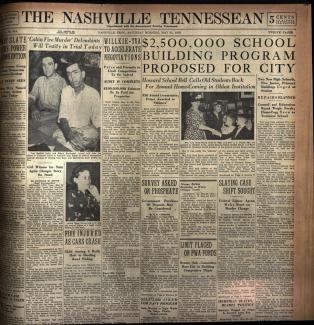 The next "First Tuesday at the Metro Archives" event will be:

August 1st, 12:30-1:30
The Commons Room, 3rd Floor of the Downtown Library
Krista Castillo, Fort Negley - Women and War: A Brief Summary of the Contributions of American Women on the Home Front during the Civil War and the First World War.