Aretha Franklin, who began her singing career at her daddy’s New Bethel Baptist church in Detroit at age 10, died Thursday. She was 76. 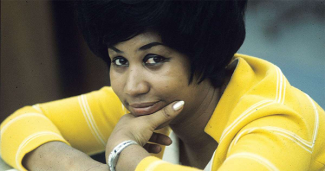 "Music does a lot of things for a lot of people. It's transporting, for sure. It can take you right back, years back, to the very moment certain things happened in your life. It's uplifting, it's encouraging, it's strengthening." —Aretha Franklin

Memphis-born Aretha Franklin first toured with her father’s gospel caravan. She went on to record with Columbia beginning in 1960 working with Jerry Wexler ("Think," "Chain of Fools"), Atlantic Records (Ahmet Ertegun) and in 1980 signed with Clive Davis’ Arista label. In February of 1967 her first top ten pop single, "Do Right Woman, Do Right Man" hit the charts. Later that year she recorded the Otis Redding-penned "Respect." That song hit number 1 on the R&B and pop charts and became her signature song. She was awarded her first Grammy Award for Best Female R&B Vocal Performance for "Respect."

Aretha Franklin went on to win 18 Grammys (44 nominations) and received the Kennedy Center honor in 1994. She performed the Star Spangled Banner with Aaron Neville and Dr. John at the Super Bowl XL and famously sang (with big bowed hat) at Barack Obama’s 2009 inauguration ceremony. She was the first woman inducted into the Rock ‘n Roll Hall of Fame (1987) and was named Rolling Stone magazine’s Greatest Singer of All Time. Her last public performance was November 2017 at the Elton John Aids Foundation Gala.

Those are the numbers. Personally, Aretha Franklin was mother to four. She was first pregnant at age 12. By age 14 she had given birth to her second son of four. She never finished high school. She was twice married, the first time at age 19. Aretha Franklin struggled with health problems, weight problems, and trouble with alcohol and family for much of her life. In spite of all that, she went on to become a major voice for the civil and women’s rights movements.

When asked what made her happy, Aretha answered, “My children. And having little get-togethers and making up a whole lot of food. And gold records. And love.”

You can learn more about Aretha and revisit favorite songs with items on our shelves, and listen online now through our Hoopla online music collection.

Read about her life and rest in her voice.