What if the Darling children ditched Peter Pan and hung out with Captain Hook instead? 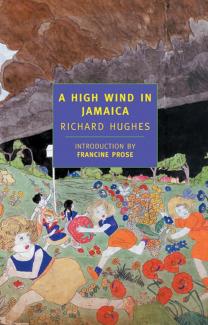 While that doesn't quite accurately describe Richard Hughes' 1929 novel, it should get you thinking in the right direction. The Bas-Thornton children enjoy a fairly interesting mid-nineteenth-century life with their parents on a plantation in Jamaica. After we're afforded a brief glimpse at what kind of daily adventures the kids get up to, Mom and Dad decide to send them back home to England, both for practical educational reasons, and because their relatively modest home is suddenly wiped out by a hurricane (or, 'high wind'). Once on the high seas, it isn't long before their UK-bound vessel is boarded by pirates and the children end up aboard the buccaneers' ship.

To say that the children (all five of them) don’t really mind being abducted is an understatement. There’s never much of an indication that the parents are missed at all, and the kids take to the sailing life with little hesitation. Revealing more about the loose plot would be a disservice, but the alternating indifference and affection with which the pirates and children generally regard each other is a hallmark of Hughes’ approach to this strange adventure.

Upon initial release, ‘High Wind’ was divisive, but has come to be respected and admired for the ways in which the author blends moments of sudden horror and effective humor into the tale, without ever granting the story a solemnity that could be considered appropriate. Especially enjoyable is the glimpse Hughes gives into the strange workings of the minds of the children. His conclusions about how they process events in a vastly different way from the adults made this novel stand apart from much of what was written about young people at the time. The original title, after all, “The Innocent Voyage”, was meant to be satirical. Take a cue from the warm weather and dig into a sunlit adventure that’s exciting, tragic, and funny, and probably unlike anything else you’ve experienced recently.

Lord of the Flies