Ever wonder why Veterans Day is always November 11? 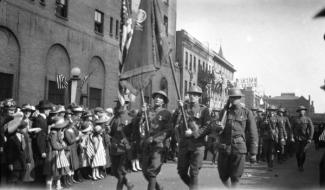 It seems a little odd when most of our other national holidays are the second Monday or the last Thursday of the month. The truth is, November 11 is an important day in world history. In 1918, on the eleventh hour of the eleventh day of the eleventh month (or, November 11), a temporary cease fire went into effect between Germany and the Allies, effectively ending World War I. Although it would take seven more months for the Treaty of Versailles to be signed, November 11 is often thought of as the end of the Great War.

President Woodrow Wilson proclaimed the first Armistice Day in 1919, starting the trend of national celebration of peace and World War I veterans. Eventually, the title was changed to Veterans Day to acknowledge all of the servicemen and women that have sacrificed for our country. The Veterans History Project Collection at NPL preserves the history of these individuals through letters, photographs, oral histories, and other materials. Over 400 veterans have contributed to this collection bringing us personal stories of military service from World War I to the present.

For example, Alice Mikel Duffield was a captain the Army Nurse Corps during World War I. She worked at Camp Pike in Arkansas where she was assigned to treat African American soldiers during an influenza outbreak. In her oral history, she remembers the impact of the armistice at home :

“And I thought the war was over! It was – or at least I thought it was. And then I told the chief nurse that I – that the Armistice was over, been signed, I wanted to go home. And she said, “The war is not over, Miss Mikel! Do you think we can – This place is filled with men that are sick and wounded. We can’t just walk off and leave them here. They’ve got to be taken care of.””

But Duffield’s plans to marry the next day resulted in her immediate discharge since women could not be married and in the Army Nurse Corps at the time. She continued to dedicate her life to the military as a civilian, working in veteran hospitals for several years.

Another solider, George O’Bryan Trabue, was in Europe less than six months before the armistice. His father recalled the reaction in Nashville upon hearing the news: 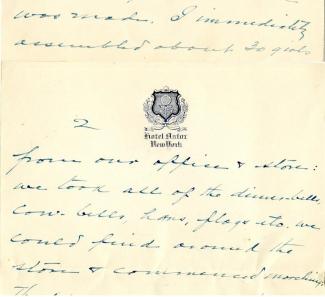 “I immediately assembled about 30 girls from our office and store. We took all of the dinner bells, cow bells, horns, flags, etc. we could find around the store and commenced marching… We were the first to make any demonstration on the street but before it was two hours old all principle streets were filled with marchers.”

In another letter, Private Ralph Jones remarks on Trabue’s limited time in the field. 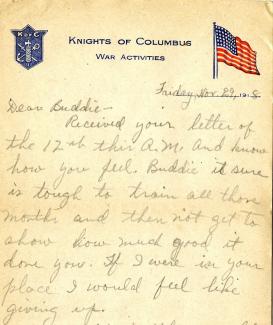 “Buddie it sure is tough to train all those months and then not get to show how much good it done you. If I were in your place I would feel like giving up.”

Veterans Day is a time to thank everyone who has served our country. One of the best ways to do this is to remember their stories. Come visit the Veterans History Project Collection at the library or online to hear the memories of veterans for the past 100 years. And remember to thank a veteran!