The holiday season brings with it tables full of home-baked goodness. Cookies, cakes, pies, turkey, ham, potatoes, casseroles – the list is nearly infinite. The next time all the cooking seems to be just too much for you – consider our foremothers a century ago.

Most women (and at this time, nearly all the family cooking was performed by females) still cooked with wood- or coal-fired stoves. Consider what a revolution it must have been when electrical appliances came on the market! 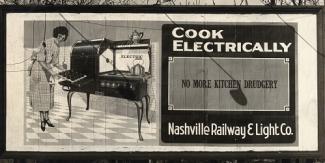 Nashville Railway and Light showcased the benefits of cooking with electricity, proclaiming "No more kitchen drudgery." Electric ovens and stoves provided even, precise heat, from a  power source that required no venting to the outside and therefore no-mess from loading up the coal scuttle or wood bin. Other electrical appliances also helped in the kitchen: refrigerators, coffee pots, and toasters, to name just a few. 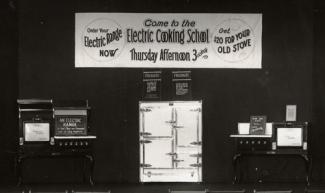 In fact, electric kitchen appliances were such a novelty that Nashville Railway & Light offered weekly cooking schools, beginning in 1925. Led by Miss Doreathea Lutzler, the classes were made more attractive by offering prizes, fresh cooked samples, and recipes. Held in "Electric Hall" at the company headquarters on Church Street (located where the present-day Nashville Public Library is), the classes drew large crowds. 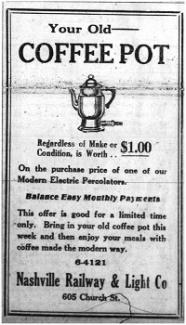 To make the transition to electrical appliances more appealing, the company offered numerous trade-in allowances, like the advertisement at right.

What was a "railway" company doing selling kitchen appliances?

Nashville Railway and Light was incorporated in 1903, uniting the work of Cumberland Electric Light and Power Company, and the Nashville Railway Company. This brought electrical power distribution into NR&L's hands, and as electrification of homes expanded during the early twentieth century, NR&L often had to tout the benefits of electricity over alternative fuel sources, such as gas or kerosene lighting or wood stoves. The company launched major publicity and educational campaigns to grow their business.

Today it is hard to imagine life without electricity and the conveniences it brings, and harder still to imagine a time when consumers had to be cajoled and persuaded to adopt its use.

A Mess of Greens: Southern Gender and Southern Food

Eat My Words: Reading Women's Lives Through the Cookbooks They Wrote

Southern Food: At Home, on the Road, in History