The 59th remembrance of a courageous action is coming upon us. Take some time to remember, or learn, about one of the most well-known events involving school desegregation in the South: the Little Rock Crisis. 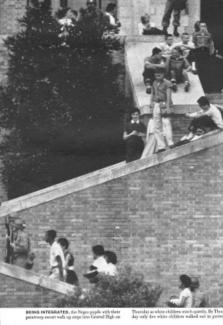 Photograph from article in Life in September 1957.

School desegregation in the United States became legal after the court ruling of Brown Vs. Board of Education in Topeka, Kansas in 1954.  Little Rock, Arkansas began integration in September 1957, beginning with Little Rock Central High. There was a great struggle for control over this issue: the right to attend one's neighborhood school regardless of race; keeping schools segregated dependent upon various reasons, religious and/or non; or politically motivated by officials.  The Governor at the time, Orval Faubus, who was vehemently against integration, went so far as to exercise the Arkansas Nation Guard to keep the students from attending. After hearing of this action, President Eisenhower assigned the 101st Airborne Division of the United States to escort the students to school and to help keep order. On September 23, 1957, nine African-American students attended their first day at Little Rock Central High School.

Altercation between the 101st Airborne Division of the United States and a white man who was against the school being intergrated.

There were no fatalities during this time period in Little Rock. The community looked upon Nashville's school integration, also occurring at the same time with integrating first grade. When aversion was present, the communities held strong and conquered over the hate. There were also no fatalities in Nashville. More schools were integrated as the years passed, but one most well-known in the South was the legacy of the Little Rock Nine. 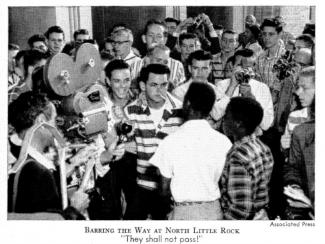 If you are interested in learning more about the Little Rock Nine, these books are always available in the Special Collections Division at the Main Library and for hold at any branches.

Turn Away Thy Son: Little Rock, the Crisis that Shocked the Nation

Understanding the LIttle Rock Crisis: an Exercise in Remembrance and Reconciliation

By University of Arkansas Press
Also, the Civil Rights Room in Special Collections is always open when the Main Library is open. Information on Nashville's desegregation of schools and lunchcounters are available.