If the name "Paula Herring" sounds familiar to you, then you already know where this blog post is going. But if not, keep reading. I'm about to tell the gruesome tale of young Paula's murder back in 1964, from the info provided by Michael Bishop in his new book, A Murder in Music City: Corruption, Scandal, and the Framing of an Innocent Man.

A Murder in Music City : Corruption, Scandal, and the Framing of an Innocent Man

UPDATE on 3/23/2018: It pays to finish a book, and yes you can mock me for the irony of a Library employee saying that. But in this case, it's true. It took me longer than it should, but I finished this novel and I have a few new notes to add about this case. First, I didn't give this book the proper justice it deserves when I wrote this blog. I didn't dislike it, but the mention of government cover-ups can sometimes make me skeptical. But this book deserves to be read front-to-back not only because of the many years of hard work Bishop puts into the research for it, but also for Bishop's main intention in writing it - to give Paula Herring peace. I believe he does that as well. I won't reveal who he believes the real killer is (and I agree with him too), but I will say that after you read this book, the facts of the case as listed below seem quite laughable. Just saying.

The daily grind here in Metro Archives consists of falling down the rabbit hole that is Nashville history. That may sound a little humdrum, but actually really isn't. Especially when you come across stories like this one, and it's one of many gruesome tales from the city's past. But what makes this one unique is that from poor Paula Herring's murder, Nashville gained its first urban legend - "Lock the doors or you'll end up like Paula Herring."

Michael Bishop's book, released just last month, not only covers the facts of the case but also the controversy behind the man accused and found guilty of her murder. Does that mean cover-up? You bet. Even better, some of the evidence that Bishop uses in his book to prove his point comes from our own records. But before we get to that, you need to know the details of the case. And as a disclaimer, all the info you read below is as it is written in Bishop's book, this includes conspiracy theories.

Facts of the Case

Victim: 18-year-old Paula Herring
When: Evening of February 22nd, 1964
Where: Timberhill Drive in the Crieve Hall neighborhood (a home that has since been renovated and sold about 5 times) 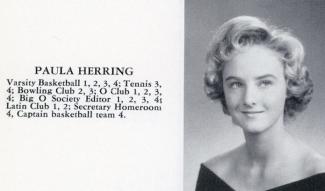 What happened?
According to the case as witnesses testified, Paula was babysitting her younger brother, Alan, as her mom went out to dinner. She was home from college (University of Tennessee), and persuaded her mom to go out to dinner as she was only going to work on a book report for "All the King's Men". When her mother and dinner companions returned home around 11:00 p.m., they found Paula's body lying facedown in the living room, having already been deceased for about an hour and a half.

Stop reading here if you don't want to know more about the details (which I suspect you probably do if you've already read this far in the post). But here's the condition that her mother and the police found her in.

Her mother (a nurse) found her lying facedown. She immediately dropped to her knees to start searching for a pulse. But sadly, poor Paula had long been dead.

Though her face was "ghostly, bloodied, and bruised", indicating that she'd been badly beaten and strangled, it was the 2 gunshot wounds to her back (and 1 to her upper left chest)  that sealed her fate. Her wadded-up sweater lying on the couch also had 2 bullet holes in them, indicating it might've been used to silence the gunshots.

This partially explains why the younger brother in the house didn't hear any noises. He only said that he'd come out of his room (he'd been asleep) to answer the phone ringing, and found his sister lying facedown. He thought she was asleep and had spilled tomato juice on herself, so he went back to his room to wait for his mom to come home.

A piece of evidence that was missing from the crime scene but later found in a field nearby, was the book that Paula had been reading—All the King's Men. See photos below of when the book was found. 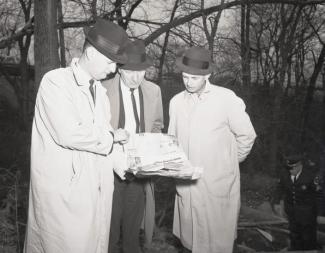 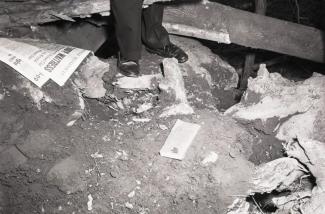 John Randolph Clarke, also known as "Red" Clarke on account of his hair color, was the son of a Judge/Republican floor leader in the State Senate. Clark could be seen as the black sheep in the family considering the rest of his siblings were quite successful in their careers (the CIA, military, real estate, etc.). In fact, at the time of Paula's murder, he'd been mostly unemployed for the previous 18 months. Unfortunately for Clarke, his pal Al Baker had a couple of stories about him that were reported to the police, sealing his fate.

The first story Baker reported was when he had seen Clarke at Ruth's Diner the night of the murder. Clarke was on the phone when Baker arrived, and soon joined him when he was done. Clarke then bragged about the call to Baker, informing him of his intentions with the UT freshman he'd spoken to. Clarke knew Paula's mother and had previously been to the Herring home before that night (that's as obvious as I'll be about their relationship). He'd told Baker that if he was not successful with the daughter, he'd wait around for her mother. He then left the diner around 8:00 p.m.

From this story, Clarke was taken in and questioned for 11 hours. However, the police were not able to find enough evidence to charge him, so Clarke was let go.

Then, miraculously, Baker produced another story about an incident taking place on Christmas Eve involving Clarke and his .32-caliber pistol. Baker was with Clarke on that evening as well, and they went to a Christmas party near Music Row. At the party, Clarke evidently got into a fight with another man, pulling his pistol out and threatening to use it. The man was spooked and left. On their way home though, Clarke and Baker took a couple of friends home to an apartment on 18th Ave; en route, Clarke was teased about using blanks in his pistol. Wanting to prove them wrong, Baker said that when they arrived at their destination, Clarke fired his gun once into the ground next to the sidewalk.

At this story, the police went straight to said apartment complex to start searching for the bullet. After a few hours and no bullet, they decided to call it a night and resume the search the next morning. Leaving the area unguarded overnight, the police returned the next morning to find a bullet in plain sight, near the sidewalk. Go figure.

It was later determined that the bullet from the apartment came from the same gun used to murder Paula.

The car Clarke was driving didn't help him either. Neighbors on the evening of the murder remembered hearing a car drive off quickly, making a clanging noise like metal hitting metal. Well, the car that Clarke left in after his long interrogation also made a clanging noise upon being started.

Check out some of the documents below from Archives' Chief Kemp files - correspondence/telegram from FBI regarding evidence; these are the same records that Bishop reviewed on his first visit to Metro Archives. 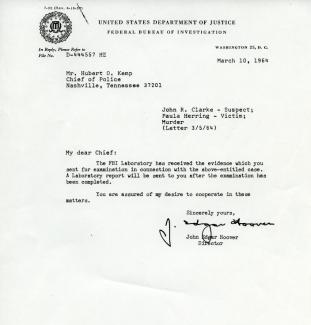 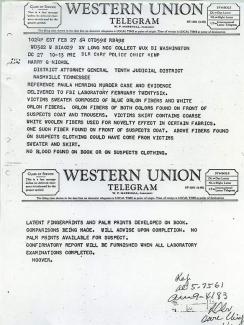 Clarke's attorney, Public Defender Charles Galbreath, was with him when the warrant charging him with first-degree murder arrived. Galbreath insisted that his client was innocent, and that the Metro Police Department had “covered up a whole lot of evidence that points away from Clarke to another person” and that “a lot of people in this county are under protection of the police.”

Galbreath succeeded in having the trial moved from Davidson County, to avoid the jury from being influenced by the negative media. Instead, the trial took place about 2 hours southwest of Nashville in Jackson, TN, at the Madison County Courthouse. Starting almost 7 months to the day after the murder took place, there were a few strange circumstances surrounding the trial:

And as spoken, exactly 5 days later at 5:15p.m. the jury returned with its verdict..."Guilty of murder in the first degree." Rather than the death penalty, he was sentenced to 30 years in the state penitentiary. Clarke reportedly blacked out after hearing the word "guilty", coming to a few moments later asking "what happened?!"

Clarke's attorney wasn't going to give up though, filing motions and appeals on Clarke's behalf. Eventually, the case even made it to the Supreme Court. Somewhat in vain though, as Clarke ended up serving some of his 30 years in the Tennessee State Prison ("Old Red Top" near Briley Pkwy, closed in 1992). 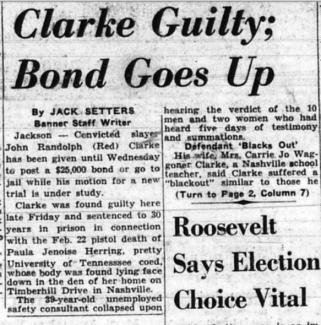 What I found to be rather strange but maybe not so much considering who Clarke's family was (especially his father), was that during the time period after Clarke's conviction and before he was sent to prison, Clarke sat on the free side of the prison bars. Clarke's family paid $25,000 in a property bond for Clarke to remain free while his conviction was appealed. For a murder as tragic and grisly as this one appeared to be, it's peculiar how easily the prosecution let down their guard gradually (no death penalty, let free on bond, shortened sentence, etc.). Curiouser and curiouser...

I mentioned shortened sentence as well, because yes, that happened. He served only 9 years at the Tennessee State Prison because while Clarke was serving his time, the governor reduced his conviction to 25 years. When that took place, Clarke hadn't even made it to 9 years yet, but according to the parole board, that was already enough time served to be eligible for an early release. On October 3rd, 1975, Clarke was a free man again.

Bishop asks, "But really, did Clarke do it?"

Here's the thing, this book is almost 300 pages long. But that's because the research that Bishop conducted in order to write his book is without-a-doubt thorough. And we at Archives have to give him a special thanks, since he attributes the beginning of his research to us; we're where he started his work. So summarizing all of it would make for an even longer blog post. Instead, I'm going to give you the bullet-pointed highlights of what Bishop thinks really happened:

The information I've provided is only a small scratch of the details he provides about the case (partly because I need to finish reading the book myself), the trial, the suspect, and even Paula's family after her death. The idea that this tragic murder spurred an urban legend in the city seems to be what started him down this rabbit hole, and I encourage you to check the book out yourself if you'd like to learn the full story of what happened to poor Paula, that night in 1964.

Bishop was also recently interviewed by News Channel 5 regarding his research and findings, at our current storage facility/old location where Bishop began his research. You can check out the video of the interview here.