Christmas is Not Over! The Three Kings are on Their Way!

There are few sights sadder than a dry Christmas tree tossed out on the trash heap on December 26. There´s no need for such a display. The holidays are not yet over! There is much more to celebrate during the rest of December and into the New Year.

In the United States, some people observe Kwanzaa December 26 through January 1. The traditional Twelve Days of Christmas begin that same day and end on January 5 or 6th, also known as Epiphany. Other celebrations, such as Boxing Day, St. Stephen’s Day, and Second Christmas Day, are observed in various European countries. 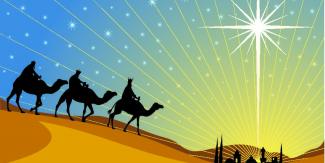 I must admit my bias, however, and state that my favorite of these is the Day of Epiphany on January 6, also known as Three Kings’ Day. In Puerto Rico, where I am from, El día de los Reyes Magos is a day of gifts, food, music, and family. It´s a big deal. If Three Kings´ Day is already a part of your holiday celebrations, or if you want to learn more about this special day, check out some books available here at the library.

Federico and the Magi´s Gift is a beautifully illustrated book that places the story of the Three Kings in a Latin American setting. Federico is worried that the Magi will not bring him anything because he has misbehaved. While everyone in the village is sleeping, he creeps out to look for the Three Wise Men in the stars. Will he see them? Will they bring the toy horse he asked for? And even though it’s in Spanish, I must highlight ¡Ya llegan los Reyes Magos! This touching book is set in Puerto Rico and describes in rhyming text the excitement and joy that preparing for the arrival of the Three Kings brings. This book is a treat. It reminded me very much of my childhood.

Federico and the Magi's gift: A Latin American Christmas story

The Three Kings appear in other stories as well, most often in connection with an elderly woman. In these stories (which appear across several cultures) the Wise Men visit an old woman while she is assiduously completing her housework. They invite her to join them as they travel toward the star that heralds the birth of the Baby Jesus, but she hesitates. She has too much work to do. She changes her mind, however, and sets off in pursuit of the Three Wise Men and the newborn king. Will she ever catch up to them?

Baboushka and the Three Kings is a retelling of a Russian folk tale, and won the Caldecott Medal in 1960. El mejor regalo del mundo: La leyenda de la Vieja Belén/The Best Gift of All: The Legend of La Vieja Belén is set in the Dominican Republic. In both stories, the old woman leaves simple but heartfelt gifts for the poor children she meets on her journey. These traditional stories illustrate that what is important about the holiday season is not the hustle and bustle, but sharing time together and giving to others.

Baboushka and the Three Kings