All Things Come to Them That Wait, Providing They Hustle While They Wait

The Nashville Globe and The Colored Tennessean were two notable newspapers that existed at different times in Nashville, but both made history with their missions and content. In honor of African-American History Month, here's a look at each of their stories.

R.H. Boyd and William B. Scott were two successful businessmen that chose to pursue journalism as a means for political protest and promotion of racial solidarity. While one newspaper had quite a long-standing career in Nashville, publishing from approximately 1905 to 1960, the other newspaper only published in the city for about a year before moving to East Nashville. Starting with R.H. Boyd's Nashville Globe, read below about each of their histories and learn what made them so important to the city. 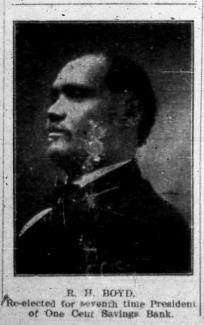 Richard Henry Boyd was a prominent businessman that moved to Nashville in 1896. He was formerly a slave from Texas, who taught himself how to read and write before attending Bishop College in Marshall, Texas.

Prior to his work in publishing, he was involved in the organization of churches and Baptist organizations, such as the "National Baptist Convention" and the "National Baptist Publishing Board" (NBPB) in Nashville. With 9 other men, the NBPB was chartered in 1896, and became a substantial business for publishing and a great source of employment for African Americans. Over the next 25 years, it became the nation's largest African American publishing company. 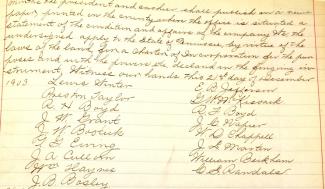 The founding of the Nashville Globe was spurred by the city's continuation of Jim Crow laws with the transportation system. It was made mandatory by the city that all streetcars were to be segregated by race, following with the U.S. Supreme Court's 1896 Plessy v. Ferguson "separate, but equal" decison.

Boyd, his son, and a few other individuals (Dock A. Hart, Charles A. Burrell or Burrill, and Evans Tyree) founded the Globe Publishing Company in 1905, publishing their first issue in January, 1906. 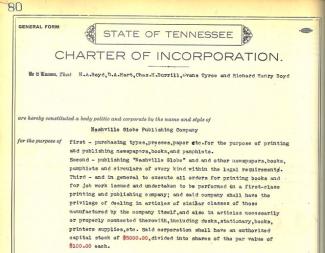 From 1910 to roughly 1930, the newspaper had the largest circulation of any African-American newspaper in the state. And in its first decade of operations, its estimated that the newspaper's readership included roughly 20,000 people (a fifth of the city's population at the time).

The newspaper was published every Friday. It had several goals, including the promotion of the boycott of the city's segregated streetcar system and the support of the Union Transportation Company, an African-American streetcar business that operated in Nashville for about a year until the boycott and  business failed. But the newspaper's mission to end Jim Crow laws, while also supporting African Americans throughout various endeavors, remained a constant throughout the business' existence.

"All things come to them that wait, providing they hustle while they wait."

I think the original phrase was altered a bit for the newspaper, but the general idea of hardwork and continuing to fight is still understood. This quote was used earlier on in the newspaper's existence, and a different one was used around 1917-18 that said:

"Nashville a City of Opportunity - The Leading Negro Journal in Tennessee"

But around 1911, the newspaper did not use a quote underneath the headline. It's unknown when the above quote was added.

In addition to publishing material that fought against the system of inequality and racial discrimination, the newspaper also promoted racial pride, self-help and independence, and responsibility. These themes carried through in the following areas of the newspaper:

During World War I, the newspaper was also a strong supporter of African American troops, and even helped support fundraising campaigns for soldiers. 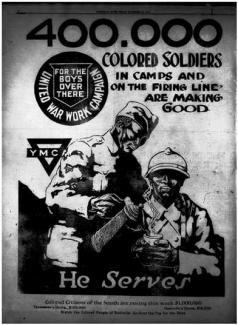 The editorial content that was managed by Boyd's son, Henry, and Joseph A. Battle strived to negate the false stories and assumptions published by white newspapers about African Americans. A few years into publication, Henry also wrote several editorials promoting the education of African Americans and the need for a state college for African Americans. This helped lead to the founding of the Tennessee Agricultural and Industrial State Normal School (TSU today), the first and only state-funded black university in Tennesse.

Here's a sample of one of these editorials that was published in the January 6th, 1911, edition: 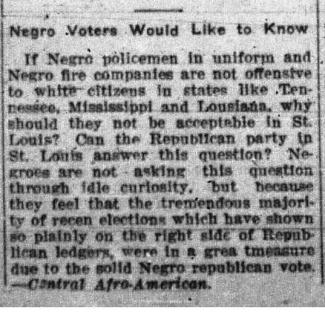 Editorial from the January 6th, 1911 newspaper.

A few samples of other stories published in the newspaper are below, including local happenings by residents, farming and daily life advice, and advertisements for local businesses: 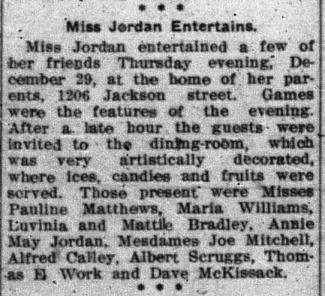 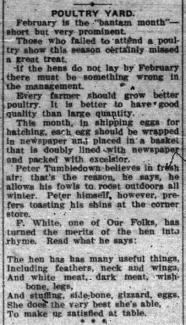 News clipping of "Poultry Yard" from the February 10th, 1911 newspaper. 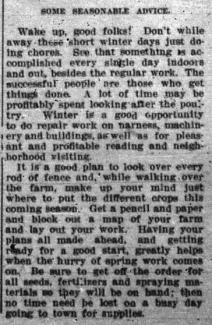 News clipping of "Some Seasonable Advice" from the February 3rd, 1911 newspaper. 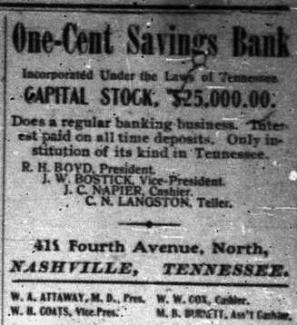 Advertisement in the January 6th, 1911 newspaper for the One-Cent Savings Bank.

The financial backing for the newspaper came from R.H. Boyd himself at first. Advertisers and other financial backers also helped maintain the business through Boyd's contacts within Nashville's African American middle class community.

The newspaper operated out of the R.H. Boyd Building on 4th Ave N, which I believe was located somewhere close to where the Municipal Auditorium is today, maybe a little further north of it. Check out the 1908 map below that shows you the approximate block where the office was located. This part of town included several other prominent African-American businesses and entrepreneurial endeavors, including the Bijou Theatre you see left of the business' block. When this theatre was revamped and re-opened in 1916, it became one of the South's leading theaters for African Americans. 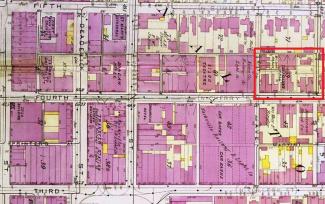 Sadly, when Henry Boyd passed away in 1960, the newspaper ceased publishing soon after. The Tennessee Encyclopedia's summarization of the newspaper's end also noted that the coming change of the civil rights era might've clashed with the newspaper's message of economic advancement and social separation, therefore affecting readership quite a bit.

If you're interested in reading more news stories from The Nashville Globe, come visit Metro Archives to view the collection that's on microfilm. We have the years 1911-1956. The newspaper can also be found on Newspapers.com, and the Library of Congress also has about 11 years of the newspaper online, from 1907-1918.

Another newspaper that began operating about 40 years prior to the Nashville Globe was The Colored Tennessean. This newspaper also existed in Nashville but on a shorter time scale (only a little over a year), but began publishing after the end of the Civil War.

The research information available on this newspaper wasn't as plentiful as when I was researching the Nashville Globe, except for some bio information on the founder I discovered on the University of Tennessee, Knoxville's website. This is where most of the below information comes from.

As part of our collection, we have a physical copy of the July 29th, 1865 (Vol. 1 No. 14) edition of the newspaper. A few clippings from that newspaper are included below.

Willam Bennett Scott, Sr. was the man that started the newspaper, and made history by being the first African American to publish a newspaper in the state. When the newspaper was moved away from Nashville, it was the only newspaper in Blount County for about 10 years.

Scott was born in 1821, and raised as a freed black man in North Carolina, by a white mother and African-American father. He relocated to East Tennessee in 1847, due to the increasing racial tensions in the area.

Over the next several years while living in East Tennessee, Scott began to develop his business in saddles and harnesses, in the Quaker community known as Friendsville. Scott was forced to relocate to Knoxville at the beginning of the Civil War, as freed blacks became targets for hostilities. This is where he remained throughout the war. It was during this time, when Scott and his family were staying with a local reverend/former editor of the Knoxville Register, that he (and his son) learned about the printing trade.

He moved to Nashville in 1865 with his son, to start publishing The Colored Tennessean. 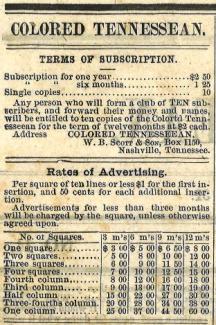 I wasn't able to locate where the newspaper's physical location was unfortunately, but here are a few other tidbits I've learned about it:

In the edition that Metro Archives has, the first news story is about the establishment of the Freedmen's Bureau, which was approved by Congress on March 3rd, 1865. Specifically, the clipping outlines the duties of the bureau.

First column in the July 29th, 1865 newspaper included a story about the Freedmen's Bureau.

After handing over the business to his son, Scott pursued other endeavors after his time with the newspaper. This included going back to working in his saddle and harness store, serving as the mayor of Maryville in 1869, and establishing one of the first schools for African Americans in East Tennessee - the Freedman's Normal Institute.

Scott passed away in January, 1885, but is well-remembered for his preeminent work in journalism, education, and as a generous citizen of the state.

If you're interested in learning more about this newspaper, you're welcome to visit Metro Archives to view the one physical copy we have. Library of Congress also appears to have a collection of the newspapers as well, though I'm not sure if they're digitized.

Thanks for reading! As previously promised, my next blog post will be about the Liggett Murder Trial of 1929.