The Civil Rights Movement is not just African American history, it is the history of our nation and the ways we come together to fight against oppression. 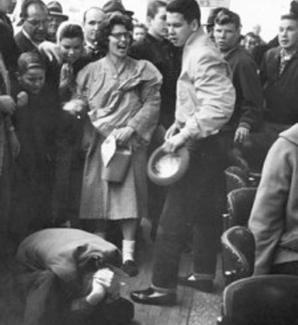 The Civil Rights Movement is often presented as a battle for equality that pitted all blacks against all whites. And, from afar, this is true. But, in Nashville and throughout the country, there were students of other races and backgrounds that believed in equality and fought right alongside African Americans. These students were subjected to the same kinds of physical abuse that other protesters faced but they continued to fight for this cause. The Civil Rights Movement is not just African American history, it is the history of our nation and the ways we come together to fight against oppression.

Paul LaPrad was a white student from Indiana that attended Fisk University during the Sit-Ins. He chose to spend a year at a predominantly African American school to surround himself with people that were different from him in order to better understand how to work with individuals from varying backgrounds. Since he was new to the area, all of LaPrad’s friends were from Fisk, and therefore, African American. While this caused no problems on campus, LaPrad remembers being frustrated that he could not go out in the city with his friends.

“…If I did choose to go Downtown and go to a movie, or go to dinner or something, I couldn’t do it with my friends from school. And you know, to me, that was a bunch of malarkey.”

As a member of the Church of Brethren, LaPrad believed in peace above all else, which drew him to the teachings of non-violence and he began attending James Lawson’s classes. On February 27, 1960, LaPrad joined other activists at the lunch counter in McClellan’s store. While there, he was pulled off of his stool, beaten, and eventually arrested for participating in the protest. Of the 70-80 students that were arrested that day for sitting-in at lunch counters throughout the city, 10 were white.  LaPrad and the other white participants were housed separately from the others since the jails were still segregated. Even after this experience, LaPrad continued to believe in the principles of non-violence and the goals of the movement.

The lessons of the Civil Rights Movement - equality, non-violence, respect - are still relevant today. As Paul LaPrad says, “It’s just important that we consider people as people. And I think, again, back to the Sit-Ins, there were certainly some people, white people who were very much against what we were doing. There were some who were somewhat open. There were some who were definitely open to what we were trying to do. And, as I stated earlier, that phenomenon of various grades of thinking exists within all communities. That’s not just a Black/White thing.”