Things Good and Wholesome: A Culinary Adventure at the Archives

One of our most prized possessions at the Metro Archives is a rare cookbook compiled for the first Tennessee State Fair, held in Nashville at the fairgrounds in 1906. There are few of these left, and it's an artifact that marks a tradition that has been part of Nashville's history for over a century. 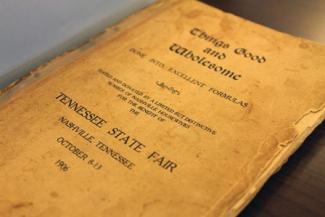 As the cover suggests, this collection of recipes is "tested and donated by a limited but distinctive number of Nashville housewives for the benefit of the Tennessee State Fair." These ladies include Mrs. J.H. Acklen, Mrs. Ben Lindauer, and Mrs. Col. John Overton.

If you're expecting traditional Southern cooking, you may be suprised by the eclectic selection in this little book. Some of the recipes have a Southern flair to them: South Carolina chicken, chess pie, and pralines. Others are more diverse, such as Charlotte Russe, brain timbales, and Alaska cream. It seems the contributors to this cookbook did more than share recipes with the public - they embraced diversity through food. Desserts and sweets make up a large portion of the recipes provided in this book.

We here at the Metro Archives have a sweet tooth, and so we tried one of these recipes as an experiment. All in the name of archival research, of course. 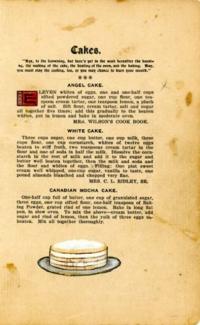 My culinary curiosity was piqued by one recipe contributed by Mrs. Whiteford R. Cole. We have no records for the Coles in our collections. In Ancestry.com, we discovered it is likely that Mrs. Witeford R. Cole was Mary Conner Bass Cole, born around 1874 and married to the president of the Nashville, Chattanooga & St. Louis Railroad (later of the Louisville and Nashville railroad). Her recipe is for Canadian mocha cake.

I was very interested in this recipe, largely because I wanted to to know what made it Canadian and/or mocha. The recipe doesn't call for any coffee or cocoa to give it the mocha flavor, nor does it call for anything distinctly Canadian. Nevertheless, it was cake, and who can argue with cake?

This 109-year-old recipe is fairly simple: butter, sugar, flour, sweet milk, lemon rind, eggs, and baking powder. To keep it as authentic as possible, I made it exactly as the recipe instructed. The result was refreshing and lemony-tasting, and had a texture similar to coffee cake. In fact, dunking the cake in coffee improved it even more.

Needless to say, the cake didn't last long. After we put the word out that there was a 109-year-old cake in the Archives, we were able to share it with the rest of the library as well. 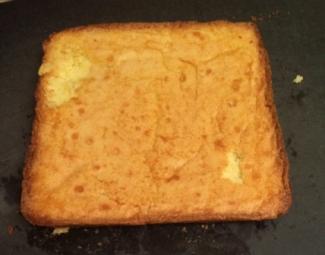 The interesting thing about cookbooks is that they become historically significant in their own right by making history personal. They may not record the great things, but they're important in that they become a record of everyday life. They give clues about a particular geographic region, socio-economic class, or culture. The limited but distinctive number of Nashville housewives who submitted their recipes for the Tennessee State Fair cookbook in 1906 were, perhaps unknowingly, representing a piece of Nashville culture through the sharing of recipes and food.

Kelley Sirko is the program coordinator for the Metro Archives, which houses materials related to Nashville's government history. Learn more about Metro Archives.