Tony Chu is a cibopathic by-the-book cop who gets recruited by the Food and Drug Adminitstration to take care of some fowl business. 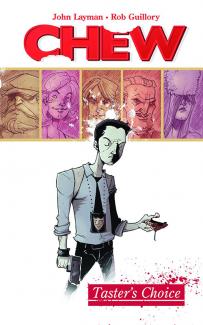 Following a horrible bird flu outbreak, chicken has been banned for consumption, and the Food and Drug Administration (FDA) has emerged as one of the most powerful government entities. The FDA investigates all food-related crimes, and the organization makes sure that all laws related to fowl are obeyed. In this universe, there are many people with special food-related abilities that live normal lives. Tony Chu is one of those people.
Tony Chu is a by-the-book cop with the Philadelphia police department. He is also a cibopath, which means that when Chu takes a bite out of something he gets a psychic impression about what happened to the object. For instance, if he takes a bite of an apple, he might see what grove it was picked from and what pesticides were used on it. Chu might also take a bite out of a tongue and be able to tell what the owner did last week. Given his special abilities, the FDA takes a great interest in Chu. It is not long after this that Chu realizes that there might be more to the bird flu epidemic than everyone first thought.
Along for the ride is Chu’s partner John Colby, Chu’s family, and Mason Savoy. Colby is the complete opposite of Tony Chu. Whereas Tony would never disobey the law by eating chicken, Colby just shrugs, eats the chicken, and moves on with his day. Chu’s family features a whole host of characters with special abilities and talents. Mason Savoy is an FDA agent who has a keen interest in how the bird flu came about and why. He has spent many years at the FDA, and would love nothing more than to take Tony Chu under his wing.
The series has won several Eisner and Harvey awards, and has been featured on the New York Times Best Sellers list. The writing and artwork is phenomenal. I really like how John Layman introduces different food-related powers. In this world, being able to make weapons out of chocolate is so normal and reoccurring that it’s been classified, named, and introduced to the audience as a small blurb within the panels. Rob Guillory has a very unique art-style that makes the comic shine. This comic will be a pleasure to read for anyone who likes fantastical stories, but also likes reality-based fantasies. There are several scenes that a completely outlandish and hilarious, but they work well within the story.