A planet covered in darkness and filled with monsters can be a serious impediment to true love. 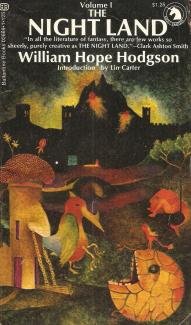 In the distant future, Earth’s Sun has died and almost everyone still alive has banded together to form a functioning society inside an enormous, miles-high pyramid made of metal, and home to numerous cities and farmlands. Protected by a mysterious power shield that draws its energy from the ‘Earth Current’, this refuge is humanity’s only real defense against the countless entities and forces waiting in the infinite darkness. Throw in some telepathic communication, a possible reincarnation of a long-lost love imperilled somewhere out there, and you’ve got the plot of this strange and impressive adventure tale from the early twentieth century.

Some works of art are important and influential, but can still be difficult to enjoy in their own right. William Hope Hodgson’s ‘The Night Land’ falls squarely into this category. Originally published in 1912, it’s an amazing blend of SF, fantasy, horror, and romance, and an early example of the ‘Dying Earth’ SF subgenre. It was hailed by both C.S. Lewis and H.P. Lovecraft, and remains a respected epic of creative vision. However, it’s hard to actually recommend.

The primary issue with the text is the author’s decision, for reasons not entirely clear, to present the narrative in a faux seventeenth century literary style. This, combined with an excessive amount of unnecessary detail and a frequently tiresome depiction of romance, means that you may find the feat of reading this book a more daunting challenge than you’re willing to undertake. Granted, I’m not a terribly fast reader, but it still took me a year of starts and stops to finally get through it.

But the hero’s lone journey through a nightmarish landscape and the dangers he faces have an undeniable imaginative power, and while this review isn’t a glowing endorsement, it should at least prompt an investigation into the oddity that is ‘The Night Land’, and a greater awareness of the works of the singular author.

The House on the Borderland and Other Mysterious Places

The Ghost Pirates and Other Revenants of the Sea

The King in Yellow, and Other Horror Stories