Dr. Margaret Rhea Seddon - One of the First Women to Touch the Stars

This spring, as we read the 2019 Nashville Reads book Hidden Figures, and reimagine our country’s history together, there’s no better place than Nashville Public Library to explore the "hidden figures" in our own local history. Dr. Margaret Rhea Seddon is one of these local hidden figures with an incredible story about reaching the stars.

2019 is a special year to honor the achievements we as humans, both women and men, have made in space. Starting with the remarkable story that is the 2019 Nashville Reads book choice—Hidden Figures by Margot Lee Shetterly—to honoring the 50th anniversary of Apollo 11 in July.

Hidden figures: the American dream and the untold story of the Black women mathematicians who helped win the space race

But also in honor of Women's History Month, we're taking a look at the life and successful achievements of Dr. Margaret Rhea Seddon, who was one of six women selected by NASA in 1977 to become one of the first female astronauts. Starting with her life growing up in Tennessee... 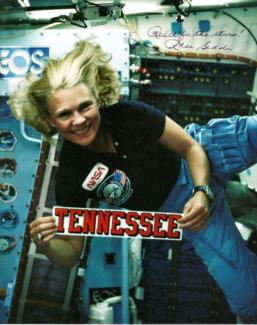 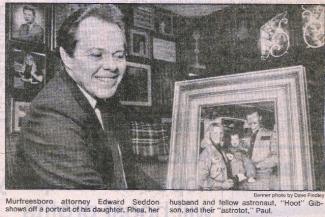 Before addressing her adventures in medicine and in space, here's a look back at where she came from. Margaret Rhea Seddon was born in Murfreesboro, Tennessee, on November 8th, 1947 to Edward and Clayton Seddon. Both are now deceased, her mother in 1976 and her father in 2010.

Her father was a veteran of World War II and prominent lawyer in Murfreesboro for many years. He was also very supportive to Rhea and her sister, Louise (also now deceased), when they were growing up - telling them to "go somewhere else" for school or for their careers, to essentially spread their wings. That's something Dr. Seddon definitely took to heart.

Headline from April, 1985 news clipping from the Nashville Banner.

Dr. Seddon goes by Rhea, as it is the name you see on the cover of her autobiography, on her signature, and even what she called herself in a 1984 Tennessean news clipping: "I'm just little old Rhea Seddon from Murfreesboro, Tennessee."

She attended St. Rose of Lima Catholic School before heading to Central High School in 1965, where one of her extracurriculars was cheerleading.

After high school, Seddon pursued college out of state, receiving her bachelors of Arts Degree in Physiology from the University of California, Berkeley in 1970. She then pursued medical school in Memphis at the University of Tennessee College of Medicine, finishing her residency in surgery in 1978.

Something that was definitely advantageous for her future career with NASA came in the form of a med school graduation present from her father - flying lessons. This led to her becoming a licensed private pilot.

According to Seddon's father, who was interviewed by the Nashville Banner in 1985 just before Seddon's first space mission, it was during her college years that Seddon first became interested in space travel.

He said, "they had just had the first man on the moon in '69. Rhea and I were walking along and looking up at the moon, realizing what was going on up there and she looked at me and said, 'Daddy, I want to do that."

She completed a surgical internship plus 3 years of a general surgery residency in Memphis, with a specific interest in nutrition in surgery patients. At that time, she was the only woman in a surgical residency program at a private hospital.

She also served as an Emergency Department physician at a number of hospitals in Mississippi and Tennessee, and served in this same capacity in the Houston area in her spare time while with NASA. Dr. Seddon also performed clinical research into the effects of radiation therapy on nutrition in cancer patients.

Describing herself in that same aforementioned 1984 Tennessean article, Seddon is modest in her achievements while also confident and professional. She said...

"I don't think I'm remarkable or terribly outstanding in any way. I'm a reasonably intelligent person who has worked very hard to be able to do the things I want to do. I was lucky to have the right qualifications when an excellent opportunity came along and was lucky enough to be selected." 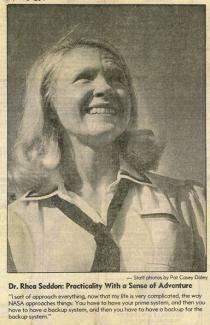 By the time Dr. Seddon applied for a job as an astronaut in 1977, her résumé included some pretty impressive qualifications - doctor (surgeon) and a licensed private pilot. Quite an impressive résumé, I'd say. In January, 1978, she was selected to be an astronaut by NASA.

As Seddon already paved a strong path for women in the field of medicine, her career as an astronaut looked to set a few more records. As I already mentioned, she was one of the first women accepted into the Astronaut Corps. She was the 8th woman accepted to the Astronaut Hall of Fame as well. And her marriage to fellow Astronaut, Captain Robert "Hoot" Gibson in 1981, created the first official astronaut couple, leading to the first official "astrotots" when she and Gibson had four children together. 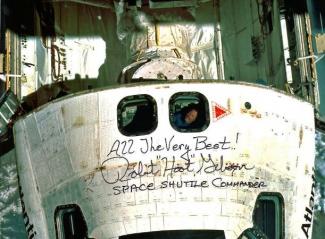 Sidenote from her NASA work, I thought what Dr. Seddon discussed about her home life in the above-mentioned Tennessean article from 1984 was quite important to include here, considering the family culture of that time and both of their occupations. When asked about her husband and how their daily family life works, Dr. Seddon said that he shares in the family responsibilites...

"He has to.' she said with a wry grin. 'That's the nice thing about marrying when you are a bit older. Your careers are there for the other person to see and your life patterns are pretty well set at that point. I don't think Hoot had any misconceptions about the little wife staying at home and taking care of everything. He realized that it was going to be a 50/50 proposition."

However, things weren't quite so equal for women when they first joined NASA. When Seddon and the other five women were first accepted into the program, they weren't treated with the same respect as the male co-explorers. In fact, Dr. Seddon remembers the feeling that she and the other women were put on display like "potted palms," token astronauts paraded in front of the press to prove that NASA was doing its part as an Equal Opportunity Employer.

The advice about being a female pioneer, given years later in an article written in a University of Tennessee Alumnus article, was essentially to not let fear get in your way.

"Sometimes, you have to dream big and apply where you don't think you're going to get in, but you have to try. And don't be afraid to go first."

The three space flights she was involved in included:

She was originally slated to join the ill-fated Challenger flight in January, 1986. But luckily for her (unfortunate for the seven assigned astronauts, including teacher Christa McAuliffe) a rescheduling move bumped her from the list.

Dr. Seddon totaled 722 hours in space. For her first two flights in space, she served as a Mission Specialist, and for her final flight in space, she was the Payload Commander in charge of all science activities.

A few other tasks/areas she was involved in while with NASA:

She spent 19 years with NASA and retired from space flight in 1997. She and her husband then decided to come back home to Tennessee for her next mission. She became the assistant Chief Medical Officer of the Vanderbilt Medical Group.

Tennessean clipping from October, 1991, when Dr. Seddon returned home for a visit.

She assisted with preparing experiments that took place on the Space Shuttle Columbia, in 1998. She also applied her experience and knowledge from NASA in her role by using an aviation-based model of Crew Resource Management to help improve the quality of care at the organization, patient safety, and overall team effectiveness.

Dr. Seddon identified teamwork as the most crucial aspect in all of her space missions. She said in an article written in the VUMC (Vanderbilt University Medical Center) weekly newspaper the Reporter, in November, 1996...

"NASA is not a top-down type of structure. Despite the public perception, astronauts are really just members of the team. Everyone has a role to play, and it's awesome the number of people that support a spaceflight—launch, landing services, mission control, flight surgeons, researchers, technicians, etc. You realize you are part of a team, and you don't run that team, you participate in it because everyone on that team has his or her expertise and you all work together."

Coming back to Tennessee after her time in space was special too. She said in the Reporter article that she had always wanted to come back to Middle Tennessee, and had finally got the chance. It was NASA that actually assigned her to Vanderbilt for her work, so it worked pretty well. Seddon said: "when my husband and I decided to come back to Nashville, it was sort of a transition. The opportunity to come back to this area and still be involved with NASA was interesting. But I knew it wasn't going to occupy all of my time, so I looked at other things."

Becoming an entrepreneur was the next mission for Seddon, when she helped to found LifeWings Partners, LLC, which took the aviation-based model that Seddon applied at Vanderbilt, and taught it to various other healthcare institutions in the country.

Today, she shares her life experiences with young people around the country and advocates for STEM education.

Dr. Seddon’s legacy as an astronaut, a surgeon, a researcher, and a woman who paved the way for others is invaluable to our world. Her story can encourage us all to let our dreams take flight.

She's also now an author and public speaker, talking about her successful work in medicine and with NASA. Unfortunately NPL is unable to order her memoir for our collection, but it is possible to request through Interlibrary Loan. 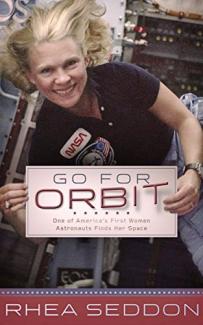 Things space-related to look for this summer at NPL: Metro Archives will display an exhibit on Nashville's impact on space travel and discovery, starting in June. More on that to come later.

P.S. Visit the Nashville Reads website to learn more and get info about the finale event!

Almost heaven: the story of women in space