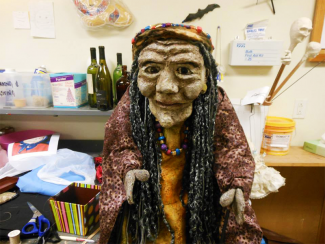 The loud rumble of thunder shakes the earth. A deep, white fog rises from the depths. A voice, speaking in the ancient language of the K'iche', rings out.

This is the beginning of the ancient histories,
From a long time ago, here in K'iche’.
Here, we shall write. Here, we shall begin to tell the stories
Of the beginning, and the origin, of everything that happened in K'iche',
Among the K'iche' people.

Thus begins the story of the Popol Wuj*, the creation of our world, and the Amazing Twins, who must save humanity from destruction.

It’s the story Wishing Chair Productions, the Library’s troupe of resident performing artists, are telling September 18 until October 15 in a production they created with support from Vanderbilt University’s Center for Latin American Studies (CLAS) and the Nashville Public Library Foundation (NPLF).

The Amazing Twins: Ancient Maya Tales from the Popol Wuj recounts both the creation of the world and the story of twin brothers Junajpu and Ixb’alanke, who can talk to animals. When their existence angers the malevolent Lords of the Underworld, they face a series of challenges that will determine not only their own fate, but the fate of all humanity. 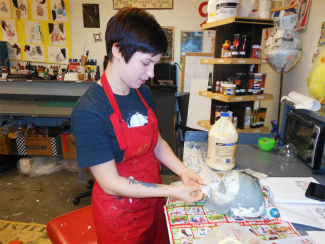 Puppet Truck artist Mallory Kimbell crafts one of the masks the puppeteers wear in "The Amazing Twins." Image courtesy of Brian Hull.

A Timeless Fable for Modern Audiences

The Popol Wuj, or “Book of the Community” in the K’iche’ language, is one of the most important texts in K’iche’ culture. It collects the myths and stories of the K’iche’ Maya, who originated in the Western Highlands of Guatemala.

The team at CLAS, who have deep ties with Guatemala and the K’iche’, first approached Wishing Chair and NPLF in 2010 about a puppet adaptation of the Popol Wuj.

“The story itself is amazing. It takes the audience to a completely different time–a completely different place,” said Bret Wilson, who leads the team of library artists when they take shows on the road with NPL’s Puppet Truck. “In a city as rich and diverse as Nashville, we want to have a catalog of stories that’s just as diverse.”

When Wishing Chair’s leader Brian Hull first read the Popol Wuj, he immediately thought of common elements from the myths of other cultures.

“The first thing I thought was, ‘This is just like the Old Testament!’ There’s a great flood, the creation of the world in six days, and a Tower of Babel type of structure,” Hull said. “For me, it’s a reminder that though we all have our differences, we believe many of the same things.” 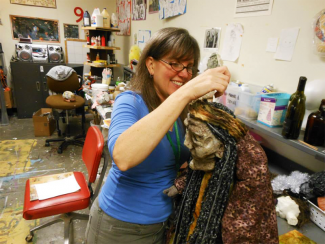 Hull and his team wanted their show to match the style of Maya storytelling. They also needed to create something children could understand without sacrificing important cultural elements.

“You’re dealing with the creation of the world, the birth of humanity, and the foundation of a belief system for an entire culture. How do you compress all of that into a 30-minute show?” said Mary Tanner, a Wishing Chair artist.

Wishing Chair and their collaborators pored over hundreds of images, texts, and other resources and spent two years building The Amazing Twins.

Manuela Tahay Tzaj, a native K'iche' language instructor based in Guatemala, provided bilingual portions of the original soundtrack. Gospel artist Sarah Hart, composed the music, using only instruments the K'iche' people used during the time of the Popol Wuj.

The Wishing chair crew hand made 30 puppets, six masks, costumes and props. And, since they only use rod, hand, and shadow puppets, their performance is more physically demanding.

During the show, performers remain visible, wearing masks featured in the Maya tradition.

“We don’t try to hide. If you look at the history of puppetry, storytellers of old let the audience see them, and accepted them as part of the performance,” Wilson said. “Wearing the masks allows us to go even deeper into the performance, allowing the story to unfold through us.”

A Partnership that Represents the Best of Nashville

“The scope of this production is vast. It’s a really unique undertaking that stretched our creative ability beyond what we’d done before,” Wilson said.

Fortunately, Wishing Chair didn’t have to do it alone.

CLAS first commissioned The Amazing Twins with grant funding from the U.S. Department of Education.

“We have worked extensively with K-12 schools, but not as much as we’d like with elementary schools. We thought a puppet show would be a great way to educate a young audience about the K’iche’,” said Avery Dickins de Girón, CLAS executive director. “We were already impressed with Wishing Chair’s high-quality shows and ability as storytellers. We thought they’d be the perfect team to bring this story to life.”

But more than money, the cultural expertise, resources, and ideas that CLAS provided make The Amazing Twins such a success.

“The folks at CLAS were great to work with. They’ve been terrific partners, answering our questions and reviewing our work with patience and care,” Hull said. “We could never have made The Amazing Twins without them.”

For both Wishing Chair and CLAS, the final result was well worth the investment.

“The puppet show is very loyal to the story, and it’s a very engaging fable. It helps us learn not only about Maya culture, but similar beliefs that many of us have,” de Girón said. “It strikes me that The Amazing Twins is just as relevant today as it was back then.”

Wishing Chair’s iconic Puppet Truck will take The Amazing Twins on the road to various NPL locations Sep18-Oct15. Show times vary by date and location, so check our events calendar to find a showing at your nearest library branch. Due to content, we recommend that only viewers age 6 and older should attend. Approximate run time is 30 minutes.

To learn more about the Popol Wuj and other fascinating stories about the history and culture of the Maya people be sure to check out some of these great titles available now at NPL.

Popol Nuh : The Mayan Book of the Dawn of Life

The Hero Twins: Against the Lords of Death - A Mayan Myth

Breaking the Maya Code: The 200-Year Quest to Decipher the Hieroglyphics of the Ancient Maya

By David Lebrun and Michael D. Coe - Night Fire Films
*Author’s Note - There is no universal agreement on how to translate certain parts of K’iche’ into English. Because of this, the Popol Wuj is also sometimes referred to as the Popol Vuh. The creators agreed to name the show based on the spelling accepted in academia at the time.
Read this story in Spanish.