A mix of weird, fun, obscure, and just plain bad genre flicks for your next movie night. 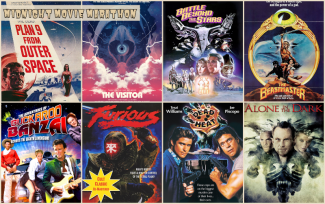 Looking to watch something a little offbeat? Here are some sci-fi, fantasy, and horror movies to add to your late-night streaming queue.

Originally titled Grave Robbers from Outer Space, this 1959 movie from infamous filmmaker Ed Wood stars the legendary Vampira (Maila Nurmi) and a posthumous Bela Lugosi. In it, aliens must resurrect the dead to stop humanity from destroying the universe.

Influenced by everything from The Omen to The Exorcist, Rosemary’s Baby, The Birds, and Close Encounters of the Third Kind, The Visitor is an Italian-produced film about an intergalactic battle between good and evil. Shot on location in Atlanta, Georgia and starring genre favorite Lance Henrikson.

Battle Beyond the Stars

Based on The Magnificent Seven and created to capitalize on the success of Star Wars, this Roger Corman b-movie is a genre nerd’s dream with art direction by James Cameron, music by James Horner, and screenplay by John Sayles. Also starring Richard Thomas of Walton’s fame (Goodnight, John Boy!), Robert Vaughn, John Saxon, and more.

Sword and sorcery abound in this 1982 film by Phantasm filmmaker Don Coscarelli. Although its predecessor Conan the Barbarian enjoyed more commercial success, Beastmaster was eventually thrust into a cult-like status by its repetitive play on cable TV. Featuring a Tiger King of sorts played by Marc Singer, the story follows a revenge-seeking animal telepath who was ripped from his mother’s womb by an evil witch.

The Adventures of Buckaroo Banzai Across the Eighth Dimension (1984)

The Adventures of Buckaroo Banzai Across the Eighth Dimension

Billed as karate heroes fighting aliens for control of the astral plane, Furious is a bizarre low-budget martial arts flick featuring brothers Simon and Phillip Rhee. On this dream-like journey viewers will encounter ancient medallions, enchanted tusks, people shooting chickens out of their hands, talking pigs, whispering rocks, and a musical group that might easily be mistaken for Devo.

Alone in the Dark

Loosely based on the Atari videogame of the same name, Alone in the Dark has garnered attention for being one of the worst films ever made. The muddled Indiana Jones-like premise about ancient demonic creatures from another dimension is accompanied by performances from Christian Slater, Tara Reid, and a horrible CGI monster that definitely make it feel like a made-for-tv SyFy movie.

The Return of the Living Dead