Libraries Transform - the Past

This week is National Library Week, and the American Library Association has selected "Libraries Transform" as its theme. While the Nashville Public Library has received widespread recognition in recent years, we have a long history of innovation and outreach to our community.

As early as 1910 the Nashville Public Library was actively involved in getting books into the hands of children in schools. Mayor Hilary Howse praised the efforts of chief librarian Mary Hannah Johnson, and declared the library to be a "university of the people" for the educational opportunities it provided to all citizens, rich and poor, young and old. 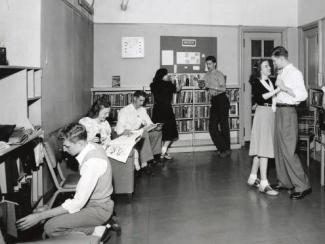 Though it is a far cry from today's technologically sophisticated Studio NPL and Teen Centers, the Young Modern's Den of the early 1960s offered both educational resources as well as entertainment. Here, one couple learns to dance, while others take a look at the latest newspapers, enjoy a Coke, or look for sources for a school project. 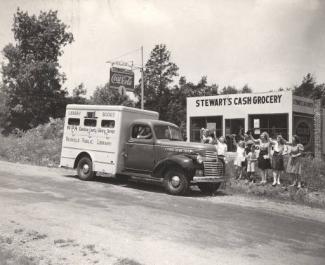 The bookmobile operated as a mini branch library on wheels, serving residents of Davidson County from the early 1940s until 2008. Though it's hard to believe today, much of the county remained rural for most of the 20th century, and the bookmobile offered important services to those in outlying areas. 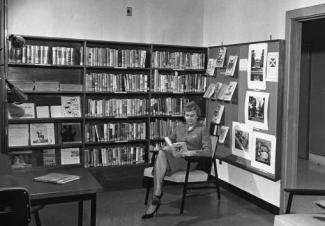 The first of its kind in the nation, the Airport Reading Room opened in 1962, though it lasted less than a decade. It provided a space for travelers and airline crews to unwind in between flights, like the stewardess shown here. 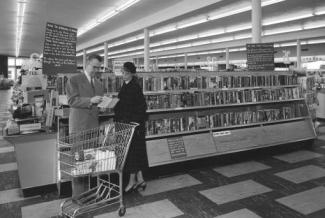 Yet another innovation was the development of the "booketeria" concept – a small collection of books available for self-service checkout at local grocery stores. This 1953 scene is inside Logan's Super Market in Belle Meade. Library Director Robert Alvarez guides a patron on how to check out a book. 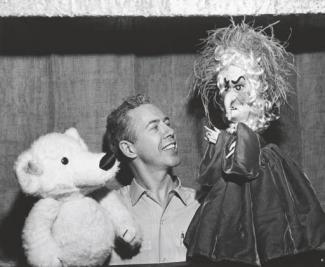 Tom Tichenor is the father of the Nashville Public Library's tradition of puppetry. In 1938, while a student at Hume-Fogg High School, Tichenor performed "Puss in Boots" for the Children's Department of the Nashville Public Library. In addition to his long association with the library, lasting 50 years, Tichenor wrote plays and books, performed on television, and was part of the Broadway production of Carnival in New York City.

The tradition of puppetry at the Library lives on through the work of Wishing Chair Productions.

Today the Nashville Public Library has 21 locations and offers access to more than 2 million items, including e-books and downloadable music and movies. The Library continues to lead in innovative services and programs, garnering national recognition for its Civil Rights Room, Limitless Libraries partnerships with schools, Bringing Books to Life preschool literacy program, and other programs and services. In 2010, NPL received the National Medal for Museum and Library Science – the highest honor given to libraries in the nation.