Sing to Your Child Shamelessly

Sing to your child and don't worry about how you sound!

Singing slows down our words and helps children learn vocabulary in context.  It also naturally draws attention to the sounds that make up words. If you aren’t one to sing aloud, or if your confidence needs a little boost, then let me tell you what inspired me to sing to children, unashamedly.

Living in Music City is awesome for several reasons. But one day last November, it was particularly amazing.

Picture this: five o’clock traffic–bumper to bumper. I’m on Charlotte Pike, stuck in such a long line of traffic. There’s nothing to do but turn on the radio and wait until I can move again. So I turn on my favorite station and I crank it up. The song “Everything I Shouldn’t Be Thinking About” by Thompson Square was on.  That’s when I look to my left and find a fellow driver in the other lane singing her heart out to the exact same song. 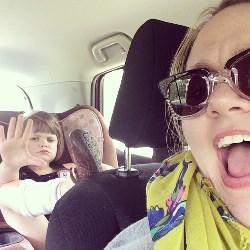 She was letting it rip! She had so much heart and soul. She shook her head, she shrugged her shoulders, she knew every word and was right on the money.  It was the type of performance that if I had it on video, it would have gotten 2 million hits on YouTube. I would’ve made the girl famous.

She was headed east, I was headed west.  Our driver side windows lined up so perfectly, I could’ve reached out and touched her. The fact that she was tuned into the same station, listening to the exact same song, made for optimal effect.

At first, all I could do was stare. Then, I began to belly-chuckle and enjoy the moment.

That’s when it hit me. Witnessing this random person’s performance was so inspiring I thought, “I could care less about how she sounds, the fact that’s she’s loving it makes me love it.” Her joy was contagious and she rocked!

All this time, I had been shy about singing to my son and other children because I’m self-conscious of my voice; however, my job is to help parents and teachers foster early literacy skills in children. SINGING is one of the best things we can do to help promote literacy. I teach this and still had a lack of gumption about singing to my own child, let alone during story times in front of other children.

That was, until I witnessed the "Charlotte Pike Performance" and learned to lighten up and just have a good time with songs. 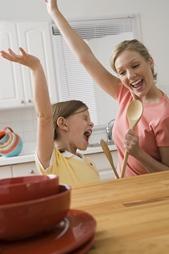 So for the last nine months, I’ve been singing my heart out to our son Uriah. Every night before bed, he gets my rendition of Patsy Cline’s “Walkin’ After Midnight.” I started this when he was born, but mostly hummed. Now I sing it. When he hears that tune, he snuggles close and puts his head on my shoulder. He absolutely, without a doubt, knows that bedtime is coming and greets it with joy.

And as we attempt to make him more accepting of the idea of teeth brushing, I sing our made-up song “This Is How We Brush” using the melody of Florida Georgia Line’s “This Is How We Roll.”  I know. Totally awesome, right?!

We sing in the car, in the grocery store, at church, and randomly on our walks. We are constantly showering him with little songs and rhymes throughout the day. Do I sing at the top of my lungs? Heck no. But you can bet Uriah hears every word. And I think it puts me a better mood.

And guess what? The young children in your life LOVE your voice – no matter what you sound like. If you are a parent, they particularly love YOURS!

But don’t do it for that reason alone.

Music and songs are an important part of literacy, and can help children understand the meaning of words in context.  Songs also give children more time to comprehend what they hear and naturally slow us (the adult) down. The pathways of a child’s brain are still being established.  So hearing something, processing it, and forming a response takes longer when compared to a fully-developed brain.

Of course, the best reason is because you simply want to sing to your child. Trust me, the desire to share that experience with them is the golden ticket and can trump even the squeakiest voice.  So pull out your favorite songs, look up the lyrics if you need to, and start singing!

And if you happen to be the girl who sang in the white sedan on Charlotte Pike last November, can I just say… THANK YOU! Thank you for showing me what singing shamelessly looks like.