UPDATE: It is with heavy hearts that I'm providing an update that former Sen. Harper passed away at the age of 80, on Thursday, April 22nd. Though the circumstances of her death are unknown, it was reported by her daughter, Linda, that "she passed peacefully and unexpectedly...holding my hand."

In honor of her extraordinary life and impactful work for the government and community, I've updated this blog post with more details about her work and life.

Nashville is a city rich with history. And it's also a city rich with several known and unknown stories about heroes and heroines standing up to inequality and injustice, since its 18th century birth. Or—in the case of the individual I chose to write about for African American History Month—someone who wasn't afraid to shatter a well-intact ceiling. 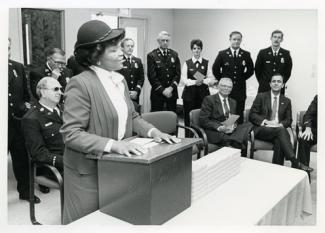 Previously a Metro Council member and delegate to the Democratic National Convention, Thelma Harper was the first African American female elected to the Tennessee State Senate in 1989, and served nearly 30 years.

Senator Harper was also one of 21 Civil Rights figures honored at the Vanderbilt-South Carolina men's basketball game last weekend (the game was on Saturday, Feb. 18th, 2017). Following an opening ceremony where the honorees were recognized, the players continued the tribute by wearing special edition uniforms dawning the names of each Civil Rights' figure on the back.

This tribute was a part of Vandy's Equality Weekend, also coinciding with the 50th anniversary of former Vandy players Perry Wallace and Godfrey Dillard breaking the SEC basketball color barrier, in the 1966-67 season. The tribute by the school shows a considerable stride in bringing more diversity to the campus, especially considering the school's history has not always reflected cooperation with Civil Right's efforts. For example, when Rev. James Lawson was a student in the Divinity School at the university, he was expelled in 1960 over his leadership in the Nashville lunch counter sit-ins.

Before Reaching the Senate

Though Harper broke through the Senate ceiling for African American women with her 1989 election to the Tennessee State Senate, Sen. Harper's political career began years before when she served as a delegate to the Democratic National Convention (1980, '84, '88, '92, 2000, '04, '08, and '12), and served 8 years on Metro Council. Harper was the second female minority to serve on Metro Council, after Lois Jordan who was on the Council from 1971-75. 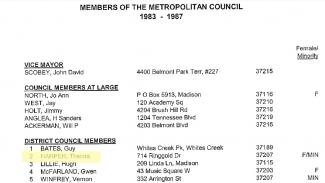 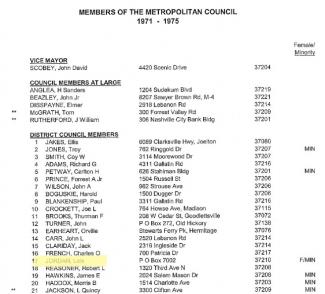 According to a 1983 Standing Committees' directory, Harper was on the following standing committees while on Metro Council:

After scanning through several of Metro Council's Agendas and Minutes' pages to see what sort of work she was involved in, I found that she was a leader in the fight over the Bordeaux Landfill, with several protests and blockades (of dump trucks) to which she was arrested for, along with several other community activists. It was a successful fight though, and the facility was closed and she then sponsored legislation to create equitable standards for landfill locations.

I also came across a bill she sponsored/introduced involving the acquisition of property for the construction of Tucker Road Bridge and approaches over Whites Creek, which passed on the first reading.

Bring on the State Senate

After her historic election in 1989, she became the first African American woman to preside over the Senate body. She was then appointed by Lt. Gov. John Wilder to chair the Senate government operations committee.

In 2011, she became the first senator to lead the legislature's Black Caucus.

Re-elected in 2014, she represented District 19 (which includes Downtown Nashville) and continued with her Council initiative by predominantly sponsoring bills to improve education.

Here are some of the other bills she helped sponsor (of co-sponsor):

In 2018, she did not seek re-election and retired from government service. The 19th District seat was succeeded by Sen. Brenda Gilmore.

Outside her varied work in public office, her community involvement included (to name a few):

Senator Harper was also a graduate of Tennessee State University, with a Bachelor of Science in Business Administration and Accounting. Along with supporting several other schools in the mid-state, she remained a lifelong supporter to her alma mater as well.

If you've ever been walking down 5th Ave N near the Arts District and noticed a Tennessee Historical marker for Sarah Estell, I hope you read it to learn who she was and what she did. But if not, here's a brief summary.

Sarah Estell was a free African American woman who owned her own eatery, selling ice cream and sweets. The location of her log house--which later became a boarding house as well under her ownership--was next to McKendree Church. The time frame that she ran her business was roughly 1840-1860's, predating most of our records in Archives to help provide evidence of her sweet operation. However, in one book we have by Jane Thomas, entitled Old Days in Nashville, Thomas tells this story:

The location of Ms. Estell's ice cream shop was rather convenient for church goers to McKendree Church. In 1833, when the church wasn't quite completed but temporary seats were still provided for a big revival that occurred there, one churchgoer decided to bribe his friends with ice cream in order to get them to come to church with him. Jimmie Dick Hill, the son of prominent Methodist Church member Harry Hill, would invite his friends to church with him and during the song and prayer, he would take his friends over to Ms. Estell's for a treat.

Ice cream was a delicacy at that time, occurring before the invention of electricity and an over-abundance of ice. So it is easy to infer that Ms. Estell had many clients; the main ones were firemen, politicians, churches, statesmen, and anyone with money, really.

From the records I was able to locate, I found the following mentions of her in an 1859 City Directory (the oldest we have) and an 1860 Census Record: