The Sky Has Never Been the Limit in Nashville

Considering how in our modern day and age, seeing (and hearing) airplanes regularly cross Nashville's skies does not appear to make us think twice, doesn't it make you wonder what life must have been like when the first forms of flight were being tested? I suppose to us, it would literally be like seeing pigs fly. Almost. Well Metro Archives is attempting to answer that question. Starting March 28th and running through May 31st, there will an exhibit in Metro Archives highlighting the advancement of aviation technology as Nashville experienced it.

Though riding in an airplane may not seem like much of a marvel to some of us today (though I still love it), it's still a wonder to learn how modern aviation technology has come so far to become one of the main forms of transportation. Over 100 years ago, aviation was still in its infancy and developed a little more rapidly thanks to both World Wars. You could say it sky-rocketed from there...haha, good pun, right?! I thought so.

Well, if aviation is something that marvels you, you might also enjoy learning that Nashville provided a few famous firsts in the sky's-the-limit field. Where can you learn about this? Metro Archives of course. Starting March 28th through the end of May, Metro Archives will be exhibiting "Aviate, Navigate, Communicate: A History of Aviation Advancement in Nashville" in the West Reading Room. The exhibit kicks off with a small, opening reception on Wednesday, March 29th. 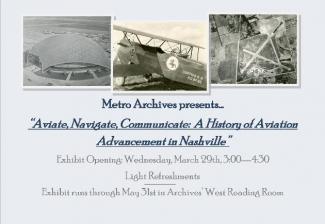 A few things that you will find in the exhibit:

Come learn a little more about Nashville's history of aviation and check out the rest of the exhibit in Metro Archves, starting March 28th and running through May 31st.

An aviation adventure : a history of aviation in Nashville, Tennessee and the Metropolitan Nashville Airport Authority