Though its expansive campus can be seen from the fast lanes of I-65 S just past Armory Lane, Father Ryan High School hasn't always called their Norwood Drive location home. On top of possessing photographs of the previous location's building and demolition in our clippings' file on the school, Metro Archives also holds several other treasures that easily tell stories about the school's past.

At some point in my blogging career, I knew I was going to get to this post. I wanted to, just waited for the right timing. The post was helped along thanks to a couple of students that visited us a few months ago, whom were doing research on the school's history during desegregation. During that search, I happened upon a vertical file (what we refer our news clippings' files as) for Father Ryan...my alma mater. Not to brag, but similar to a few other long-standing schools in Nashville such as Davidson Academy (first school in Nashville) or Hume Fogg, the school is rich with history. And I didn't think the information hiding in the folder that supported that, needed to stay hidden. So here are a few of the most intriguing highlights:

​Most are familiar with the story behind how the school acquired its name, after having originally opened as "Nashville Catholic High School for Boys" (it didn't restructure into a co-educational institution until 1970 when it merged with the all-female Cathedral High School). But in case you're one that's in the dark as to who this "Father Ryan" fellow was and why he constituted a school being named after him, then listen up. He was known by some as the "Poet-Priest of the Confederacy", and by the Chicago Tribune, he was "the Traitor Priest" for his work as a Confederate Chaplain, but his actual name was Father Abram J. Ryan.

He wasn't born in Tennessee, nor did he die here, but the legacy he left behind during his short time here no doubt prompted the school's everlasting tribute to him (the school was renamed for him in 1929 when they relocated to their previous home on Elliston Place). Described as independent, strong-minded, easily distracted and perhaps even stubborn when it came to his convictions, Ryan spent his years in Tennessee predominantly ministering to the soldiers during the war, serving at various parishes around the state, lecturing charismatically, and of course - writing verses of poetry. A few of the parishes he served while in Nashville are still-standing - downtown St. Mary's Cathedral (now St. Mary's Church of the Seven Sorrows) and St. John's Parish in Edgefield (now Holy Name Church in East Nashville).

His most famous poem, The Conquered Banner, was written after the end of the war and left behind in Knoxville, where his landlady found it. It was first published in 1865 under the pen name, "Moina." All you students, graduates, or general school enthusiasts out there might know that the name "Moina" is also used as the title of the school's newspaper. 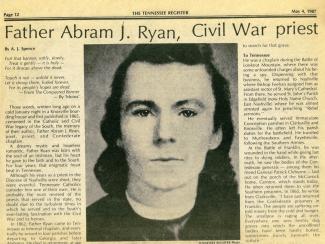 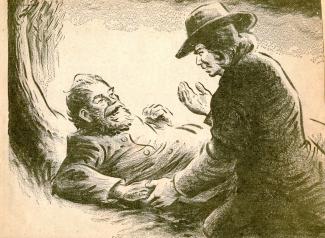 ​Though 1927 is listed on the school's website as the school's first graduating year, we unfortunately do not have a commencement program that far back. But we do have a copy of one that comes close - 1933... 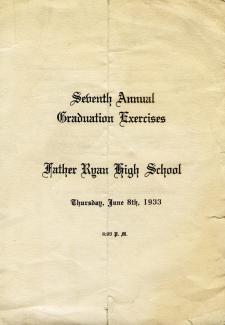 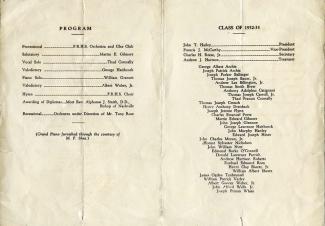 At this time, the school had moved to their new Elliston Place home on the Buford Property (from their original West End location that they had outgrown). They were officially renamed "Father Ryan" and their mascot was established as "the Panthers" before it was officially changed about 40 years later, to the Irish. An article written in the Nashville Banner newspaper (no date, appx. 1928) made an announcement to the founding of the new building/school:

"Catholics of Nashville have bought one of the most beautiful sites in the city for the new high school which they will begin at once to build. The Buford property on Elliston avenue between Twenty-second and Twenty-third avenues is abundantly large for the buildings contemplated and for recreation purposes for the children. The school is needed and will prove an educational blessing to the city as well as an ornament. The Catholics have large property holdings on West End Avenue between Twenty-first and Twenty-second avenues. There their splendid cathedral stands and the residence of their bishop. At present former residences in the immediate vicinity belonging to the church are used for school purposes. They are inadequate. They are overcrowded. It is to meet the demand for more extensive and modern accomodations that the new school will be provided.

​From seeing it being built to seeing it being torn down. Our clippings' file also includes photographs of when they demolished the building. As sad as it is, at least we can remember what once was. Now that the block on Elliston looks completely different; I believe that block houses a few large complexes now with restaurants and other commercial businesses (correct me if I'm wrong on that).