Nothing Short of a Joy of a Lifetime

As the country collectively experienced the first total eclipse in many, many years on Monday, here's a look back at previous eclipses that Nashville has experienced.

Trigger Warning: Non-scientist writing about science (which might be scary for some); please disregard any errors that may occur below.

Now that I've made that disclaimer, here comes the fun part. This past Monday, all across the United States (as close as possible to the path of totality, I think), we got to experience a rather momentous event known as a total eclipse (everyone that didn't have a giant cloud blocking their way, that is). I'm not going into any specifics about what a total eclipse is, how it happens (though it's self-explanatory), or anything else - but I'm referencing it in order to discuss a couple of previous solar eclipses that occurred in Nashville, many years ago. 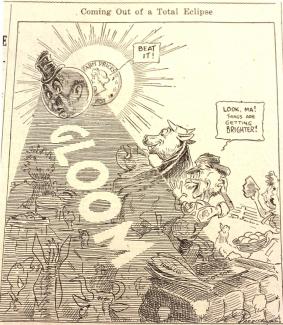 As I was digging through the Archives' records, searching for any reference to previous astronomical events, I happened upon the article and photographs included in this blog. John and Ward Dewitt - local astronomy enthusiasts and of various other fames (mother's side of the family founded Ward-Belmont School, John founded Nashville's first radio station in 1922 and was the first man to successfully bounce radar beams off the moon, etc.) - photographed the solar eclipse on August 31st, 1932. The total eclipse was best viewable in New England, but according to the U.S. Department of Agriculture's Weather Bureau Volumes, the eclipse was 73% total here in Nashville.

Similar to ours on Monday, the moon first began eclipsing the sun at 1:20 in the afternoon, and was at maximum 73% at 2:33. A solar halo was observed during the time of the eclipse, which if I'm interpreting the record correctly, lasted until 4:20 in the afternoon. Unlike the experience we unfortunately had with clouds interfering, the record also says that the sun shown behind the clouds, "which in themselves did not interfere with the record."

In the news clipping below, they discuss the device that the Dewitt brothers used to take their photographs; their main mission being "getting some good pictures of the sun shining over the gigantic mountains of the moon." In order to take their pictures, they used a "coelostat" device, also known as a "joshua" because it "makes the sun stand still." I have no idea what relates that definition with the name "joshua", but there you have it.

The coelostat (shown in the clipping below and in the photographs above) works by catching the sun in the flat mirror on the top of the device, which is then reflected back into the telescope. It is rotated by a synchronous mirror so that it is in harmony with the rotation of the earth, which holds the sun still. I can't explain any better than that because that's almost word-for-word from the news clipping, but for all astronomers and astronomy enthusiasts out there - I'm sure you can explain more.

Another article that discusses the brothers and their achievements in astronomy goes into further explanation about their hobby. Here's a quote from that clipping that I thought best suited our collective experience on Monday: "Any eclipse is beloved of scientists, but a total solar eclipse when the moon is turned so that its most mountainous sides are etched against the powerful sun is nothing short of a joy of a lifetime." 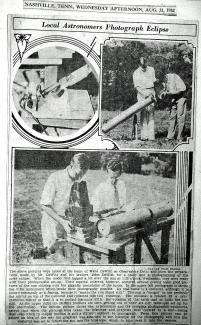 Report from the US Department of Agriculture on the day of the solar eclipse, in August 1932: 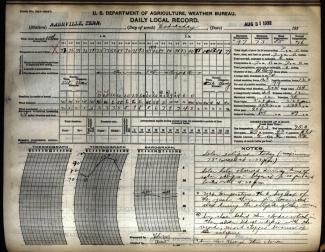 Another documentation of a solar eclipse that was viewed in Nashville, occurred on July 31st, 1878. At that time, it appears the War Department (specifically the "Signal Service of the U.S. Army - Division of Telegrams and Reports for the Benefit of Commerce and Agriculture) handled/documented/predicted/whatever you do to the weather - they did it. When the U.S. Department of Agriculture took over the weather records (we do not know the date on that), the books primarily contained readings, like the page you see above. But in these early journals, the weather readings were written out and most of the time, marked "verified" or "not verified" at the bottom. It appeared to be a slowly-advancing science but one with a lot of promise. In fact, in one report, the officer who wrote the entry describes over-hearing some men discussing how advanced the science of recording the weather has become and what it will some day be; this was during the bad Yellow Fever outbreak in Nashville when many people paid stronger attention to the weather in hopes of cooler temperatures...

"...by one of the party it was mentioned that the weather reports have become more valuable just now another that the progress made in this branch of science was most wonderful and that by and by it would in all likelihood become so perfect , that the state of the weather would be reported for several days in advance with as much accuracy as Eclipses of the Sun and Moon are more foretold for years."

It appears the officer recording this was quite proud of his line of work, because he goes on to mention that they continued their admiration of his profession though they did not know he was listening. And then he says that not a day goes by when someone calls to the office for information about the weather. Well props to you, buddy. I'm sure that was not easy work.

In a few of his other entries for the month of July and August, he mentions how hot it gets here, averaging around the temperature of 95 degrees. I'd imagine that was hot without air conditioning to alleviate it. My favorite entry is when he mentions that his keys rusted in his pocket "due to excessive perspiration."

His entry on the day that the eclipse took place starts with rain that finally ceased at 3:10, when a break in the clouds opened up...

"The Eclipse! - Rain ceased at 3:10 PM, when a break in the clouds lent encouragement to those who had made preparations to observe the Solar Eclipse. However, they were almost wholly disappointed; for, at the moment of contact an unusually large and massive cumulo-stratus cloud concealed the sun. Two momentary breaks, and two only, occurred, during one of which I was among those who saw the phenomenon. The impression having obtained that this was the proper place to view the eclipse from and to be guided with reference to time, people of all ages and condition thronged(?) the office and, with my consent, occupied the roof. With darkness, clouds disappeared."

See his entry below... 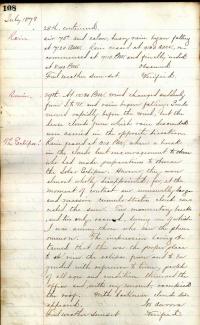