To get us geared up for Fandom Fest, Guest Writer Tim talks about one of his favorite fandoms: Transformers.

Let’s be honest. When most people talk about Transformers, they never use the word “great” to describe it. At the mention of Transformers most people think of the Michael Bay movies which, I think we can all agree, are not great. The cartoons were okay. The toys are pretty cool. And most people would simply describe Transformers as robots punching and shooting each other, then turning into cars or planes and punching and shooting each other some more. But what if I told you there was more to the Transformers than meets the eye? For example, did you know Megatron started out leading a revolution against an oppressive government that mandated that Transformers be solely defined by their alternate modes? Or that gender among Transformers is fluid and non-binary? Being a Transformer means a lot more than having the amazing ability to change from a robot into a vehicle (or in some cases, animals). Being a Transformer means adapting and changing to new and challenging circumstances. It means recognizing that people (and robots) can learn and become better (or worse) than they were before.

Here are two suggestions from IDW comics that might “change” your mind about the Transformers. And when you go to the Nashville Public Library’s Fandom Fest this March, you may want to consider checking out some Transformers comics.

Last Stand of the Wreckers

This is often considered the best Transformer story of all time, if not one of the most underrated comic books ever. It is about a group of the most vicious Autobots, a hardened team called the Wreckers, being sent on a suicide mission to a prison that has been taken over by Decepticons. There is no Optimus Prime, Megatron, Bumblebee, or any well-known Transformers in this story. Instead, most of the Transformers you meet are robots you’ve never heard of before: Ironfist, Overlord, Springer, Impactor. But the writers, Nick Roche and James Roberts, are able to create such a connection between the reader and this ragtag group of Wreckers, that when one of the Wreckers falls, it will rock you emotionally. This book explores the damage that war and PTSD has on a person’s psyche as good Autobots end up changing, making horrible decisions, and committing terrible actions. It explores the problem of idolizing someone without really knowing them and how coming to really know a person or group of persons can fundamentally change one’s perception and understanding. It is interesting to watch one Autobot in particular, Impactor (who quickly became one of my favorites), transform from a hardened, unforgiving warrior with a harpoon hand to being able to show mercy when it counts. Plus, this book feature something called “brain bullets.” You read that right: Brain bullets. Last Stand of the Wreckers

More Than Meets the Eye/Lost Light

Oh boy, let me tell you about this series. The war between the Autobots and Decpticons is over. The Autobots have won and are in control of Cybertron. About 200 Transformers, both Autobots and Decepticons decide to board a ship called the Lost Light and set out on a quest to find the long lost Knights of Cybertron who everyone thinks can usher in a new golden age for all Transformers. The only problem is that this crew gets distracted very easily. This series literally starts with a bang and does not let up, but it never sacrifices the emotional development of its characters for the goofball action. And when Megatron joins the crew, oh boy. Things get interesting real fast. This series will make you laugh. It will make you cry. Seriously, you will cry. I will give you one warning regarding the crying: Rewind and Chromedome. Tears start to well up in my eyes just thinking about Rewind and Chromedome.

Guest blogger Tim is a library associate at the Richland Park Branch Library. He thinks all fandoms are cool, but is more partial to the more esoteric ones. And he loves learning of new obscure fandoms, so if you’ve got one to share, he would love to hear about it.

Be on the lookout for more Fandom Fest content here on the NPL Blog. The Fandom Fest Kickoff takes place March 3rd at the Main Library from 10 a.m. till 4 p.m. Activities will include special guest speakers, making sci-fi smoothies, and even a cosplay contest. All ages and fandoms are welcome to attend. 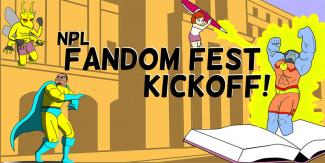