It’s here! It’s here! The wait is finally over. Our new equipment has been unboxed and put together!

This is post #4 in our series documenting the Metro Archives’ Audiovisual Conservation Center’s Film Conservation Project, and boy are we pumped to share the details of our new film inspecting equipment!

We have ordered and received new equipment for the Film Preservation Project over the last few weeks. The equipment was generously funded by the NEH, and we could not be more excited about it.

I started the Film Preservation Project with an old set of rewinds that had a lightbox attached. There was not a lot of room to inspect the film or make splices on the board because the lightbox got in the way. The rewinds were loose, and it was hard to get the film reels to stay in place, making it extra hard to get a perfect wind on an archival core. 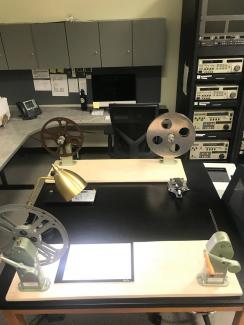 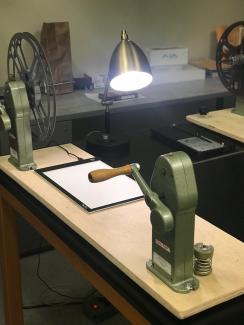 We now have two sets of 16mm and one set of 8mm and super 8mm rewinds. The sets were spectacularly refurbished by Dwight Cody at Boston Connection, Inc., and so far, they have made film inspection and winding much smoother and efficient.

The new rewinds are definitely an exciting addition to our film archive, but not the only new equipment we recently got in the mail!

We received an exciting amount of 16mm, 8mm, and super 8mm film leader. Leader is used at the head and tail of a film. It is a length of film that is used to provide protection to the film and assist with threading a projector.

Molecular sieves are next on the list of new equipment. They are used to control the level of acetic acid decay and to prevent the spread of this type of degradation.

We will replace all of the old reels and film cans with archival film cans and archival film cores, and we have received an exciting amount of cans and cores to help all of our films live a happy life in the archive

Next on the list is a new tracing board that acts as a light board. This is used with the magnifying film viewer called a lupe to view the content on the film. The light reflects through the film, making the image easier to see. We also got two new lamps that provide much needed over head light.

Last but not least on the list, we received eucalyptus essential oil. The oil is a natural way to clean gunk and old glue off of the part of the film that contains the image. It is easier on the film, and also easier on the archivists since it does not contain any harsh chemicals.

We also received our A-D strips in the mail a few weeks ago allowing us to test the acetic acid decay levels of each film. Film is made of cellulose acetate, and overtime it begins to decompose. A-D strips help us measure this decomposition.

Now that we have all of our new equipment, we have been able to refine our workflow and move much quicker through all of the collections. Catch our new rewinds in action in the video below!

The Film Preservation Project is generously funded by the National Endowment for the Humanities Preservation Assistance for Smaller Institutions Grant.

Melanie is an audiovisual archivist with a passion for cats, books, palindromes, coffee and equal access to information. She has worked in the Audiovisual Conservation Center since February 2018. On the weekends you can find her singing all of your favorite dad rock hits at karaoke.