Activist Osta Underwood's papers reveal how important planning and preparedness are to organizing a movement. 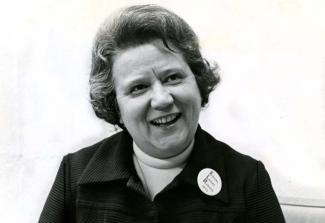 In Nashville, grassroots organizing for political and cultural change has a long history- sometimes yielding positive change but mostly it is a slow-going process. Today when we see activists march in the streets for Black Lives Matter, or hear Emma Gonzalez address a crowd of thousands advocating for gun safety, their passion, strength, and courage shine through, but we forget about the careful strategizing that goes on behind-the-scenes. That is what I find so special and interesting about the personal papers of attorney and women’s rights activist Osta Underwood- the many folders of preparatory notes and statistics, speeches, and annotated newspaper clippings reveal how planning and outreach is integral to successful organizing. 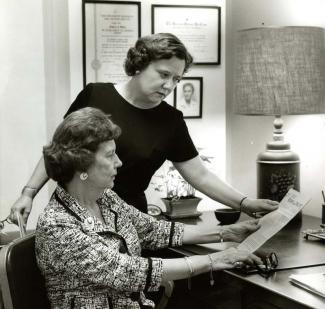 Knoxvillian Osta Underwood moved to Nashville in the 1930’s to obtain her law degree from the Nashville Business College and the YMCA Night Law School. Beginning in the 1940’s and continuing into the early 2000’s, she became heavily involved in women’s rights advocacy through professional organizations. Underwood was a founding member of the Zonta Club of Nashville, a global organization of professionals empowering women worldwide, and served as President of the Tennessee Federation of Business & Professional Women’s Club of Nashville (B&PW) as well as the National Federation of the B&PW. She was appointed to multiple local women’s boards and committees by Tennessee mayors and governors, including Governor Winfield Dunn’s Commission on the Status of Women in 1971. Underwood was also extremely active in her church, serving as President of the Executive Board of the Tennessee Baptist Convention in the 1980’s. 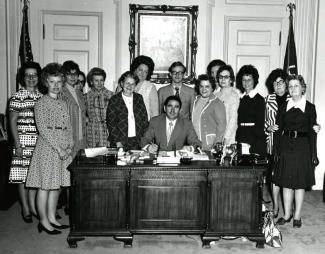 This collection includes Underwood’s personal photographs, correspondence, speeches, and notes as well as publications, procedure guides, and annual reports from the B&PW. Through these items we can see Underwood’s dedication to women’s issues such as the Equal Employment Opportunity Law, the Equal Rights Amendment, Title IX, and women’s health and reproductive rights. One of her biggest victories came when Underwood, as President of the B&PW, advocated for a woman’s right to serve on a jury in Tennessee. In 1920, when women won the right to vote, only twelve states allowed women to participate in juries. In 1951, thanks to the efforts of Underwood and others, Tennessee became the forty second state to have women jurors.

Although Underwood influenced many women’s issues, her papers show a particular focus on efforts to ratify the Equal Rights Amendment (ERA) both nationally and in Tennessee. In the 1970’s, the women’s liberation movement (WLM) brought about a renewed interest in the ERA, a proposed amendment that would guarantee equal legal rights for all American citizens regardless of sex. Originally written by suffragists Alice Paul and Crystal Eastman in the 1920’s, it wasn’t approved for ratification until 1972. With help from Underwood and the B&PW, Tennessee became the tenth state to ratify the amendment that year. At first, the amendment had full bipartisan support and by 1977 received 35 of the necessary 38 state ratifications. However, passage of the ERA was stalled by the organization efforts of conservative Phyllis Schlafly, who argued that the ERA would disadvantage housewives. The Underwood papers include a point by point rebuttal Osta penned to a pamphlet entitled “Stop ERA” which outlines arguments popularized by Schlafly. Swayed by anti-ERA rhetoric, Tennessee, Nebraska, and Indiana voted to rescind their ERA ratification although there is much discussion about whether this is even legal for states to do. Fully dedicated to the amendment, Underwood met with the Tennessee General Assembly and gave a speech in support of their original pro-ERA vote. This speech and more are included in this expansive collection.

The national fight for Civil Rights and equity for all is ongoing. Individuals and organizations are still working hard to popularize their movement, gain advocates, and implement real change. Underwood's papers give future activists a valuable look at the inner-workings of professional campaigns. 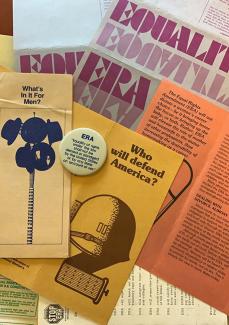 Equal Means Equal: Why the Time for an Equal Rights Amendment Is Now

Personal politics : the roots of women's liberation in the civil rights movement and the new left