Nashville Women Whose Names You Should Know

In honor of African American History Month, and to highlight a few individuals in Metro Archives' new display on Nashville women, this blog post is dedicated to a few notable women of Music City.

2020 is a special anniversary year (as mentioned in my last blog post about Prohibition), and that's mostly special thanks to the anniversary of the ratification of the 19th Amendment, which we can thank the state of Tennessee for. But since we have a few months still before the official anniversary, and because we're currently celebrating African American History month (and soon in March, Women's History Month), this blog post is dedicated to honoring a few notable Nashville women.

These are just a few honorable African American women who are also included in Metro Archives' latest display that's honoring 36 Nashville women. The display will hopefully be finished and ready for viewing by next week (the week of Feb. 23rd), if anyone is interested in coming to see it. In the meantime, feel free to learn about these ladies right here... 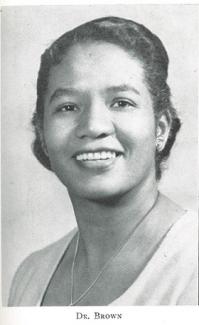 Photo of Dr. Brown from the 1955 Meharry Medical College yearbook.

Dr. Brown was an individual of many firsts and many talents. Growing up in an orphanage in New York, she acquired her interest in medicine at the young age of 5 when she had her tonsils removed. Her interest in education and medicine stayed a part of her from then on out.

Her mother had left her at the orphanage when she was young but reclaimed her when Dorothy was around the age of 13, though that didn't stick either. Dorothy ran away from home several times (due to an unsatisfactory home life), going back to the orphanage each time. She eventually found a safe and healthy home life with her foster parents, Lola and Samuel Wesley Redmon, soon after beginning school at Troy High School. She eventually graduated from this school at the top of her class, in 1937.

Where to next? Bennett College in Greensboro, North Carolina, where she attended on a four-year scholarship. She graduated in 1941 and proceeded to dedicate her time as an inspector in the Rochester Army Ordinance Dept.

Though Dr. Brown was not born in Nashville, she still made a strong impact here from the moment she began attending Meharry Medical School in 1944. After 4 years of med school, Dr. Brown graduated in 1948 and soon began an internship at a hospital in Harlem, New York. 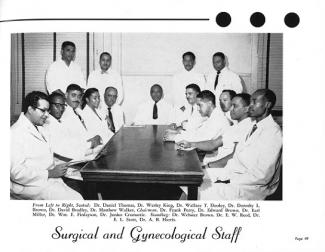 1957 yearbook photo of the surgical team from Meharry Medical College, with Dorothy being the lone woman on the team (on the left).

But surgery was the field she most desired, despite the complete lack of African American women in it in the South. Surgery was not viewed as a profession which women could handle. Did Dr. Brown prove them wrong? You bet, with the help of Dr. Matthew Walker (also in the above picture, he's two people to the right of Dorothy) who accepted her into his program (after initially being reluctant to admit her). So this made her the first African American female surgeon in the South.

Thanks to her years of hardwork and dedication, in 1955 she became the Assistant Professor of Surgery and the first African-American woman to be made a Fellow of the American College of Surgeons. And, she was eventually named Chief of Surgery at Nashville's Riverside Hospital, a post she held from 1957 until the hospital's closure in 1983.

Other important firsts and honors... 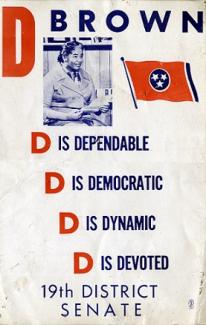 One of her most memorable quotes about being proud that she was a role model...

"...not because I have done so much, but to say to young people that it can be done." 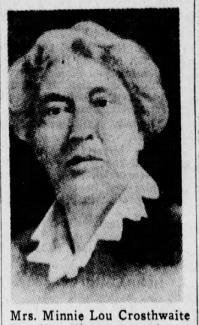 Born to Frances McAlister Scott and unknown father, Minnie Lou Crosthwaite was an individual most notably known for her passion for and perseverance in education. She was the first African American individual to pass the teacher's exam and, along with her husband, was one of the first four African American teachers in the segregated Nashville Public School system.

Like Dr. Brown, you could say that Minnie's inspiration for her career came to her when she was a child, when Fisk University first opened its doors in 1865. She attended classes there when she was a child, when the school offered elementary and high school training. Prior to returning to Fisk for her teacher's training (which she completed in 1877 at the age of 17), she attended public schools in Nashville.

Starting in 1879, she taught in Nashville Public Schools for 14 years, as one of the first African American teachers hired to teach in the schools for blacks. Prior to that, the city was only hiring white teachers, which Minnie thought was unacceptable and decided to challenge the system.

This is not where she stopped in terms of challenging the system; Minnie was passionate about fighting for equal rights for African Americans throughout her entire life. She chose the education system as her means to help fight discrimination.

That mission continued when her husband came along — Scott Washington Crosthwaite, a physician, clergyman, and educator who taught in the county school system. They married on June 12th, 1884, and proceeded to have 4 children. See their marriage certificate below, where the last name "Crosthwaite" was spelled without an "e". I'm unsure what the correct spelling is, but most resources referencing the name include an 'e' on the end. 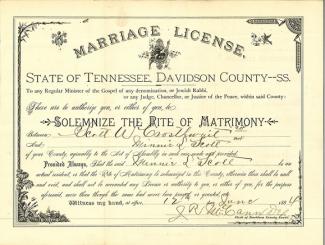 Minnie and Scott were quite the intelligent couple, making headway in the prejudiced Nashville school system. Scott Crosthwaite was also notable in his own right for becoming the first African American principal in the Nashville Area, at Belle View School where Minnie also taught. Later reports show that he eventually became the principal at Pearl School.

Teachers and principal at the Belle View School, from the 1884 Annual Report from the Board of Education.

But back to Minnie's achievements. After her work in the Nashville school system and a time with the Knoxville Public School System, Minnie returned to Fisk yet again to receive her Bachelor of Arts degree, which she completed in 1903. Not long after this, she joined the staff at the school and would go on to achieve many great things with the university, both in teaching and in her work in the registrar's position (keeping alumni records, etc.). In addition to her work with Fisk, she also devoted some of her time to the YWCA.

The Crosthwaites eventually moved to Detroit, where Minnie continued her mission to end the same discriminatory system that dominated Tennessee. She passed away at their home in Detroit in 1937.

Like Dr. Brown, Minnie Crosthwaite has a building on Fisk's campus named after her. She is, without doubt, one of the most outstanding individuals ever to attend and work for the school.

From the book Notable Black American Women, Book 2 on Google Books—which is also the source for many of the above details—here is a quote about Minnie from her friend Mary D. Shane, which was included in a tribute to her in the Fisk News when she passed away...

"She was friend, adviser, counselor and mother. She had time for the little problems to grown-ups, but all important to the student who needed to be guided very carefully during the tempestuous adolescent stage." 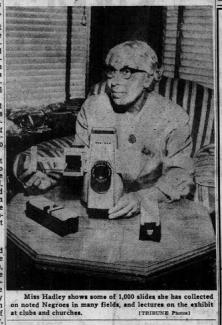 Photo of Marian Hadley from a 1959 Chicago Tribune clipping (from Newspapers.com), showing her large collection of slides of African Americans in various roles.

Though the amount of information out there on Marian M. Hadley is not as plentiful as Dr. Brown and Minnie L. Crosthwaite, Marian Hadley is still a very important individual to the history of Nashville because she was the first African American Librarian for the Negro Branch of the Carnegie Library. 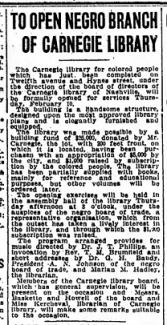 Tennessean clipping for the opening of the Negro Branch of the Carnegie Library.

Choosing the librarian for the branch sounded like it was difficult, with 35 total applicants. Head librarian, Margaret Kercheval, was looking for someone that was responsible, educated, able, with character, judgement, and great tact, among many other characteristics—I paraphrased. In the end, with help in choosing from the Board of Trade and the Library Board, Marian Hadley, at the age of 29, was the best choice.

A little background information about Marian, she came from a prominent family as the daughter of Benjamin J. and Mary (Mollie) Robinson Hadley. Her father was a prosperous business owner (saloon-keeper) and well-known in the community, on the board of the Freedman's Bank in 1872, and a delegate from Davidson County to the Colored Men's Convention that was held in Nashville, in 1879.

Her father passed away in 1890 after being ill for some time, but Marian was not alone as her mother and three other siblings (of which Marian was the youngest) were still alive. Like Minnie Crosthwaite, Marian and her sister were both graduates of Fisk University.

After she was chosen as the Librarian for the new Negro Branch, she headed north to Louisville to take part in a two-month-long apprenticeship at the Western Colored Branch of the Louisville Free Public Library while head librarian, Margaret Kercheval, ordered books and handled things for the branch in her absense.

Her initial salary when she began was $60/month, with her assistant Hattie Louise Watkins making half that. She resigned from the library in 1919 to pursue other endeavors with the Y.W.C.A., specifically to form the Blue Triangle Chapter - the African-American branch of the organization. When she returned to the Library in 1921, she was making about $70/month.

During her time as Librarian, it appears she also endeavored to educate herself in other areas such as real estate, residential studies, and "Negro life and literature" (she had a program at the library on this very topic). See below the ad for the program, and a letter she wrote referencing her real estate work and studies. 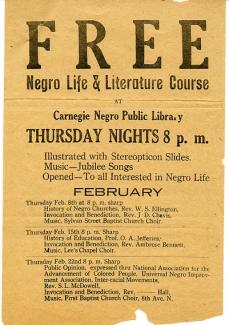 Ad for programming at the Negro Branch of the Carnegie Library. 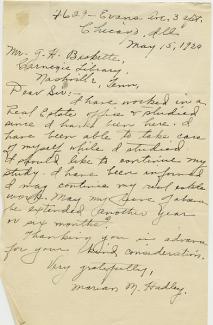 Letter from Marian Hadley to G.H. Baskette of the Carnegie Library.

After her time in Nashville, she eventually left for Chicago where she continued her great work with the Library system there. Continuing in her father's footsteps perhaps, she was a prominent and important individual in the African American Community, both while in Nashville and in Chicago. One of her other great achievements was her collection of over 1,000 images of African American people and topics.

And while sadly the beautiful Carnegie building is no longer standing (destroyed in 1949 thanks to the interstate and NES building construction near the library's home at 12th Ave and Hynes Street), the library that succeeded it is the aptly-named Hadley Branch in Hadley Park, on 28th Ave N.

Quote pulled from a letter written by Marian to the Head Librarian & Board of Directors, from July 1922, asking to expand hours at the branch to meet the growing needs in the community...

"I believe it requires more time, more energy, and more patience to bring, especially adults, to the point where they realize the value of reading and to accept the advantages offered them by their city through this library at the present date."

The display honoring Nashville women titled specifically "Nashville Voices" will be ready for viewing by next week (exact date to be determined). And, if you haven't visited the second floor gallery near Special Collections recently, there's a great display there now through November showing political cartoons related to women's suffrage. The exhibit is titled "Saints or Monsters: Political Cartoons of the 19th Amendment". Come check it out as well!