This isn't the first time I've referenced the Criminal Court Case Files in a blog post, BUT I reference them now because thanks to our wonderful volunteers in Archives, the index of case files is complete! And we've located some rather interesting cases that have occurred in Nashville over the last century - including the one I'm going to tell you about now that started as a business rivalry and culminated as a shooting.

But before I get into the juicy details of that particular case, here are some notable highlights of the completed case index:

And now, for the details of that case I promised you. Why is it intriguing, you ask? Well, mostly because the first item in the folder appears to be the evidence tag that was once on the attempted-murder weapon, which of course made me say "what is THIS?!" And down the rabbit hole of newspapers.com I went...

So oddly enough, this particular case starts where it ends too - at the courthouse, near the Criminal Court Clerk's office. Actually Criminal Court was a regular business site for both the victim and shooter, because they both worked in the business of bail bonds, and had been doing so for at least a decade.

Here are the facts of the case, starting with the key players...

Allow me to introduce you to the defendant...

And now the victim...

On Tuesday, January 7th, 1964, both men were following their usual business routines, which brought them to the courthouse. Specifically, their business was conducted on the 6th floor, near the Criminal Court Clerk's office. But the fate of this day would follow an abnormal path.

Just after noon, Robert Waddey was standing near the clerk's office, speaking with attorney Ralph Gordon, his client Mrs. Willa Dean Clinton (who was charged with murder), and her ex-husband. Jake Rader came along then, and allegedly "interjected himself into the conversation."

Rader and Waddey started arguing, and moved away from the others; the argument was apparently over who would provide bond for Mrs. Clinton. According to Rader's statement and plea of "Not Guilty", Waddey told him "Go for your gun. I'm going for mine." But of course, Waddey claimed that after words were exchanged, he told Rader not to shoot because he didn't have his gun. Who knows really. But out comes Rader's gun, and after a misfire at first, he shot Waddey in the side.

To the average bystander, this shooting might have seemed like a one-off incident, but it was fueled by a long-lasting rivalry between the men.

This rivalry, that had caused several incidents over the years, all started roughly around 1954 when Waddey unsuccessfully ran for constable in the 12th district. Rader was highly opposed to Waddey's candidacy as well.

And it continued well after that, including a dispute over the rules that regulated the bonding business. Where Rader saw the rules as being improperly administered, the employees at the Waddey Bonding Company viewed it as Rader monopolizing the business.

And thus, I present you with a quote from each party that essentially sums up the 10-year feud....

Both bondsmen managed to find themselves in front of a judge several times of their own accord as well.

Rader's list of charges appears longer than Waddey's, but it's easy to say both of these men knew their way around a courtroom and not just because of their jobs. Here's a few of their previous charges:

Sounds like an interesting guy. All that said, he was also described as someone that knew many by name and would always do anything for his friends.

I could keep going for both of them, but you get the idea.

The Jury's Decision and Aftermath

Before revealing the decision of the court case, I'm sure you're more curious about who posted Rader's bail...at least I was.

Well after the shooting, Rader was rushed into the nearby D.A.'s office by an investigator for the District Attorney. It was there that he broke down and provided his reason of pulling out his pistol. After providing his statement, he was released thanks to Police Sgt. Morgan O. Smith, who signed his $1,550 bond. This actually caused the Police Sgt. to retire (after he was suspended first), because he violated police department rules by signing that bail bond. Go figure.

Poor Waddey on the other hand was in the hospital for quite some time after the shooting. His condition fluctuated between fair and critical, and he underwent surgery a couple of times at Baptist Hospital.

As of February when Waddey was still in the hospital, the District Attorney General Harry Nichol said that they'd wait to see if he would recover before charging Rader; looks like that happened on March 27th, 1964 after Waddey was in the hospital for 47 days.

Waddey was confined to a wheelchair after the shooting, because the bullet lodged in his back and damaged his spinal cord, and caused him to be paralyzed from the waist down. By the time of the trial though, he'd improved to crutches.

Rader's official charges that came in March were: "Assault with intent to Commit Murder in the First Degree and Assault and Battery and Malicious Shooting." And for carrying a weapon (38-caliber pistol to be exact). 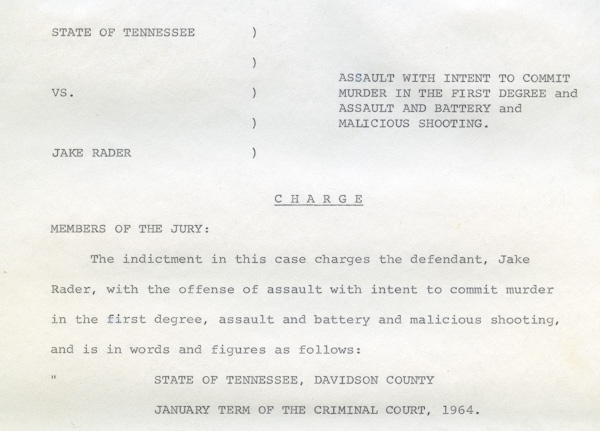 The trial took place later in the year, in early November. It was an all-male jury, with Judge Raymond H. Leathers presiding.

As I briefly touched on earlier, Rader's plea of "innocent" was for self-defense because he felt threatened by Waddey. He testified that Waddey said that he was going for his gun, and then his hand moved toward his pocket as if he was doing so...

"He threatened to stomp my guts out and then said he had a pistol and would shoot me half in two...I walked away from him, but he followed me and then put his hand in his pocket. That's when I shot him."

Of course, it was the defense's intention to create a case that Rader's fear of Waddey was warranted. And it sort of seems like they did that well. Actually, from reading one of the news clippings that talks about how "tempers flared" between the attorneys, it sounds like a trial that would've been fun to sit in on. Here are some of the highlights:

Sadly yet not surprising, the jury didn't fully believe Rader's story. He was found guilty of assault and battery. He was sentenced to 30 days in Metro Jail, and fined $50 + court costs. He got lucky though, since the jury found him "Not Guilty" on the other two charges of "assault with intent to commit murder" and "malicious shooting". Fair enough since he argued that he could've shot him many more times but stopped at one bullet. I mean, come on, give the guy a break.

After the court was adjourned, Rader wept openly, and told reporters that he was pleased with the verdict. He was given 30 days to file a motion for a new trial, but it doesn't appear he would appeal. And that wasn't the end of this case, but it was the end of his bondsman career, sadly.

A few years later, Waddey came back at Rader with a lawsuit for $100K, to which Waddey won; $75K was for actual damages, $25K for punitive damages. Rader was set to appeal that, but I never found a follow-up clipping that indicated whether he did...or if he did and lost/won. I'm guessing he just paid the guy.

See, I told you - crazy! But also, 1964 seemed like a bit of a crazy year in Nashville. If you haven't already read about the Paula Herring murder, which happened almost 2 months after this courthouse shooting - I'd check that out next!

'Til next time and Happy Halloween,