A walk among the tombstones at the Nashville City Cemetery means a walk back through a full-scope of Nashville's past. Most don't realize this significance as they drive down 4th Ave S, but it's been there 200 years now, and will be for 200 more.

The Nashville City Cemetery was not the city's first public burial ground, nor the second, but it has been the permanent one since 1822, making it the oldest public cemetery in the city. And many of the city's former prominent residents rest there now, and collectively tell a variety of narratives about the city's history.

If you're curious about the history of this cemetery, plus want to learn about one of the legends of the grounds, please read on...

When Nashville was just a young pup of a city (only roughly 38 years old), it had already outgrown its physical roots (for burials at least). 1822 was a time in Nashville's past when the city was truly beginning to see its future potential of being more than mostly farmland - it was going to hold its own as an economic and commercial center of the South. That growth meant a physical change in many ways, especially this changing concept of where to bury their deceased.

The Nashville City Cemetery was not the city's first public cemetery, nor their second. While there is no evidence of the first cemetery's location, it is believed to have been located right within the city near the Cumberland River bank and the former public square. The second site was said to be located "...on a hill overlooking the French Lick in the area later known as the Sulphur Spring Bottom." To be a little bit more specific, it was located roughly where the baseball park sits today since it was near the former Sulphur Dell Park, south of Jefferson and between 4th and 5th Aves.

See the 1804 map below with the white arrow indicating approximately where the first burial ground was located. 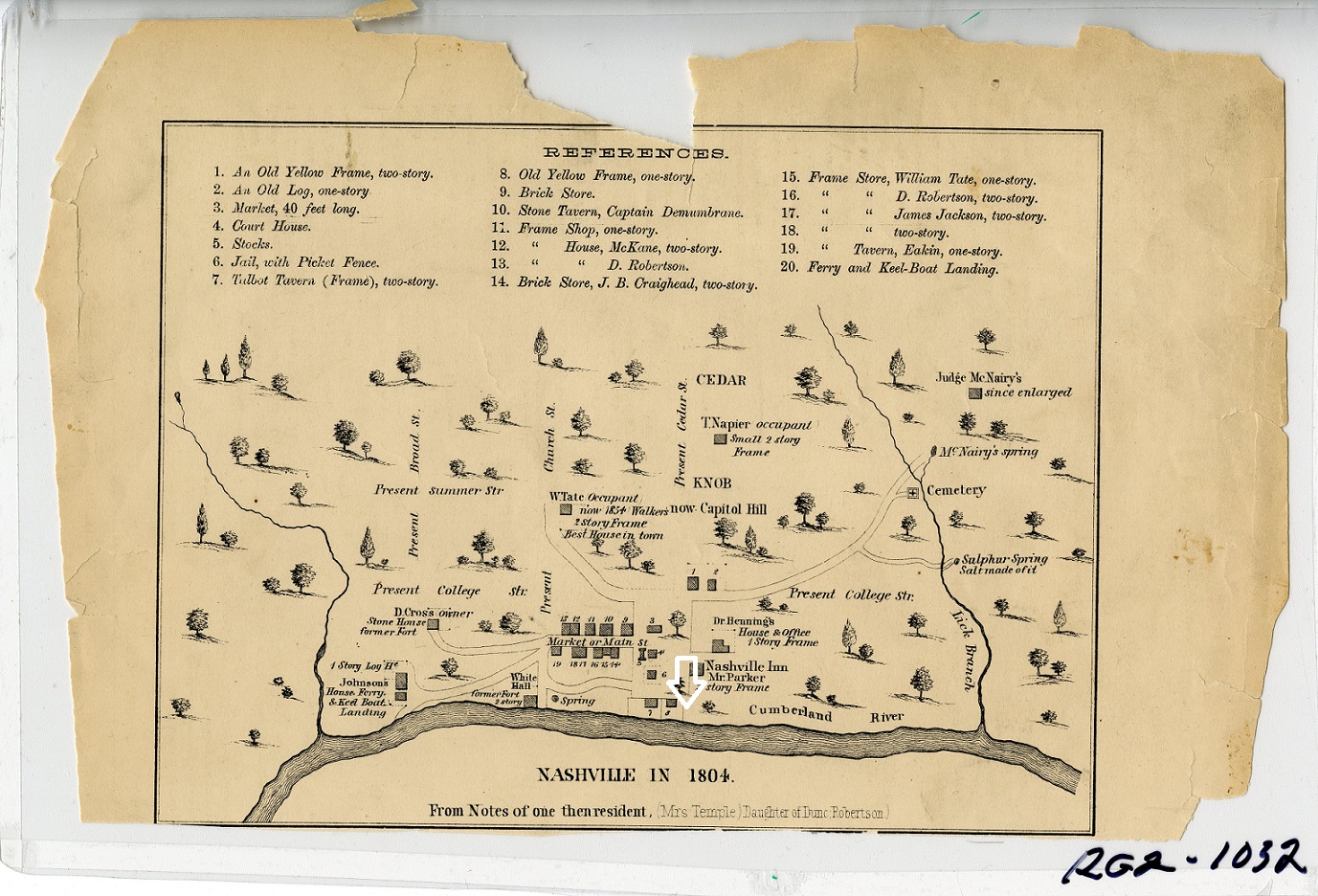 Little to nothing is left of either site today, but with about 40 years passing before the creation of the Nashville City Cemetery, it is believed there were many graves at both sites.

Carole Bucy and Carol Kaplan explain in their book The Nashville City Cemetery: History Carved in Stone, how Nashville's decision to look for more space for a burial ground went against the norm of the day for cemeteries. Burial grounds were typically within a municipal area or church graveyard, with graves close to each other instead of allowing space for future burials; clearly posterity was not considered.

With the need for much more space and better soil, the city began planning and looking outside its limits.

After a public meeting to discuss the matter, four acres of land was purchased from a local tavern keeper and land speculator, Richard Cross for the site of the new cemetery. They purchased the land for $1,200, and the deed specifies...

"...on said four acres to have and to hold the said four acres of land and thirty feet alley to the said Mayor, Alderman and Corporation of Nashville and their successors for the use of a burying ground forever." 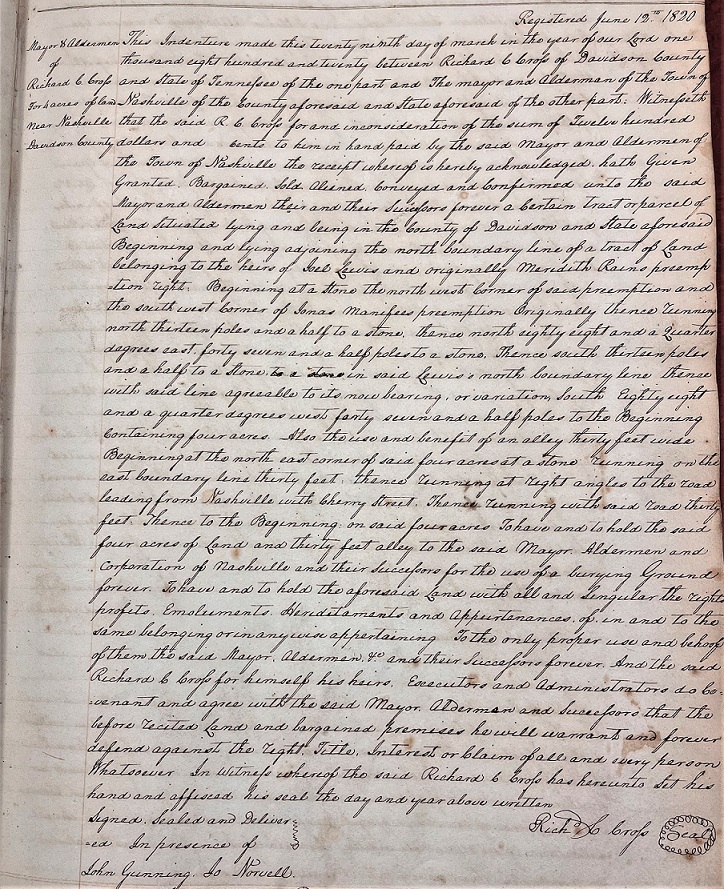 I bet you're wondering 4 acres, that can't be enough! Well it eventually wasn't. Over the cemetery's first 20 years, the city made 8 more land purchases to expand the grounds to its current 27 acres.

The aerial image below from the Walter Williams Collection is from 1936 and shows the cemetery within the yellow box, and the view is facing north. 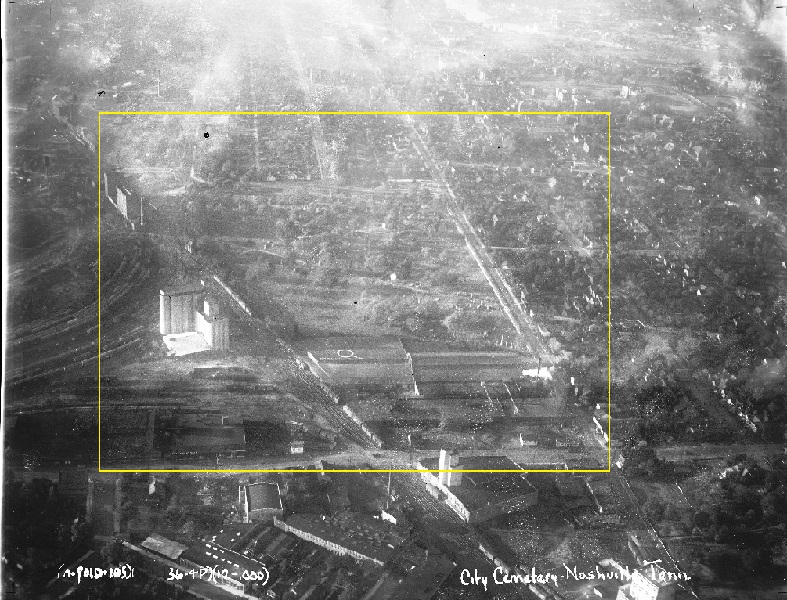 Since this 1822 beginning, there have been roughly 20,000 individuals buried there. Sadly, the records of the earliest burials between 1822 and 1846 were lost during the years of the Civil War. However, over its first few years, burials from other sites such as the Sulphur Spring burial ground and other private places were gradually moved and reinterred at the new cemetery.

Other Facts You Should Know: 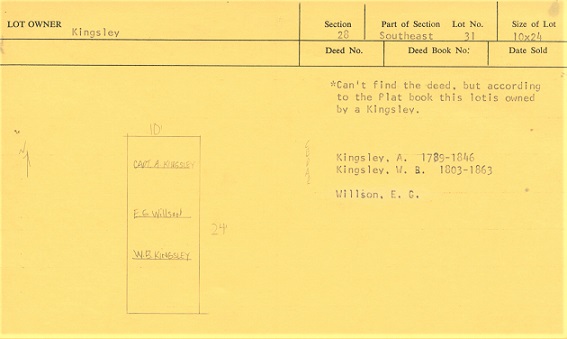 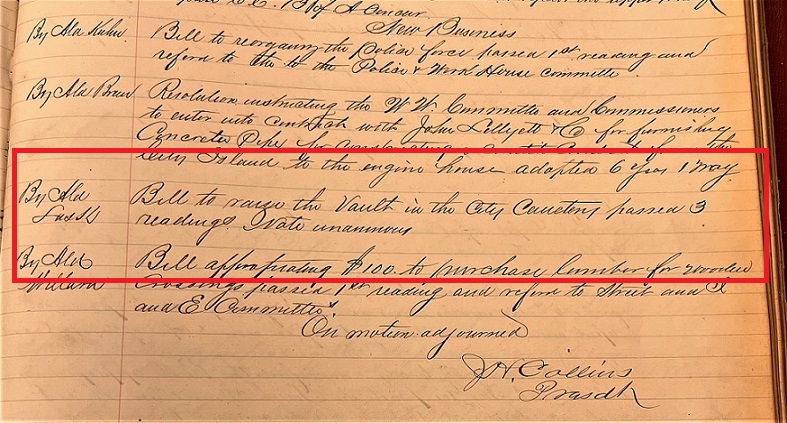 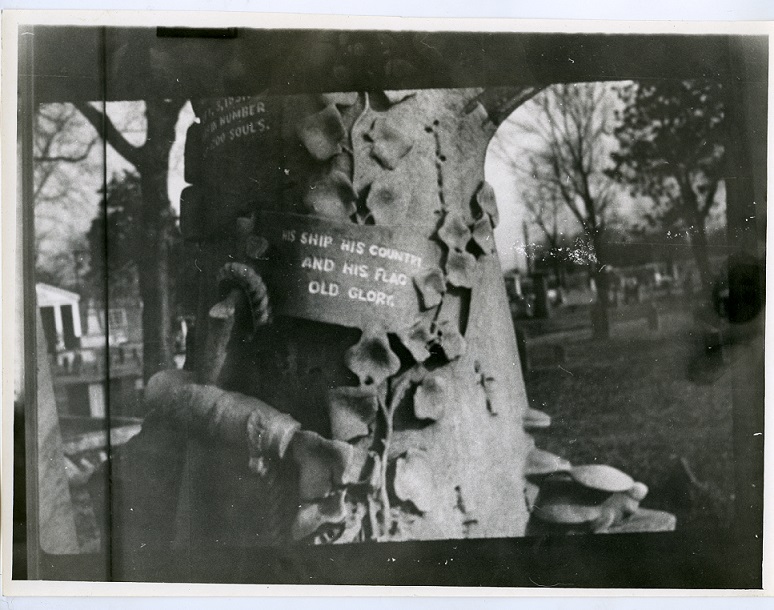 As of today, there are approximately 22,000 people buried at the cemetery, 6,000 of those buried there are African American (the section for the African American graves is separated from the rest and located at the southwestern part of the cemetery). And the rule/law/bill from 1878 that prohibited further burials in the grounds UNLESS you already own a lot still stands - I think. Don't quote me but as far as I can tell - family of those buried there or mayors of the city are able to still be buried there.

Are you curious about who is buried there? Here are a few notable mentions with their date of death in parenthesis... 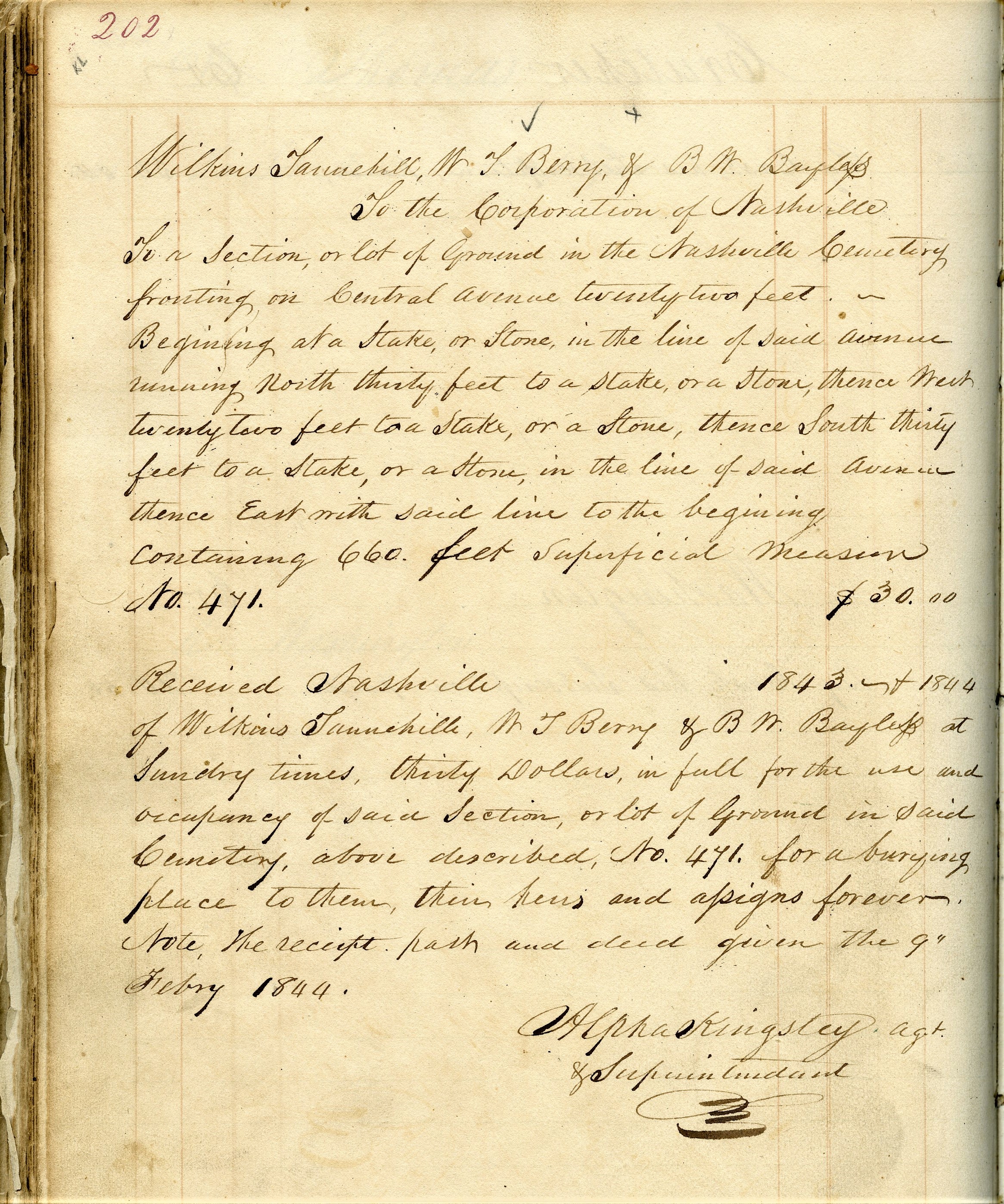 Now, for what you're reallllyyy here for, right? What else coincides well with cemeteries than ghost stories. Well trust me, with 200 years of existence under its belt, the City Cemetery has some good ghost stories and legends. I'll provide you with one of them...

The Tale of Ann Rawlins Sanders

It isn't very often you see a huge rock with a lantern on top as a gravestone in a cemetery, but that is very much the case for the grave of Ann Rawlins Sanders, or so it was rumored for many years.

Poor Ann passed away in 1836 from an apparent suicide of jumping into the Cumberland River after a lover's quarrel. Or so the legend goes.

After she was buried, it was said that her fiancé brought a boulder from the river, and a lantern, to the cemetery because Ann was afraid of the dark (not sure being buried 6 feet under a boulder would help that). How romantic yet heart-breaking though.

Over the years, the story has been embellished with people claiming they've seen a woman's ghostly shadow near the grave at night (now I'm embellishing but it could be true).

Here's where I burst your bubble though...none of that is true, including the fact that Ann is not even buried under the boulder. I'm pretty sure she passed away from another affliction as well. Also, she was a married woman and the lantern itself is not from the 1830's, but rather is dated around the early 1900's.

Though what is true is that she is buried on the same lot. The lot where this boulder and lantern reside belongs to Edward Steele (Ann's brother-in-law), and the 1902 sexton, Dan Marlin, said that it is Marion Steele who is actually buried under the boulder. If there's ever a zombie apocalypse with people coming back from the dead, I think it's safe to say she won't be one of them.

For reference if you'd like to visit the cemetery yourself and see this grave, here is the cemetery plat and section 18 is the location of the Steeles' lot (coming from the Oak St. entrance, this grave is easy to spot)... 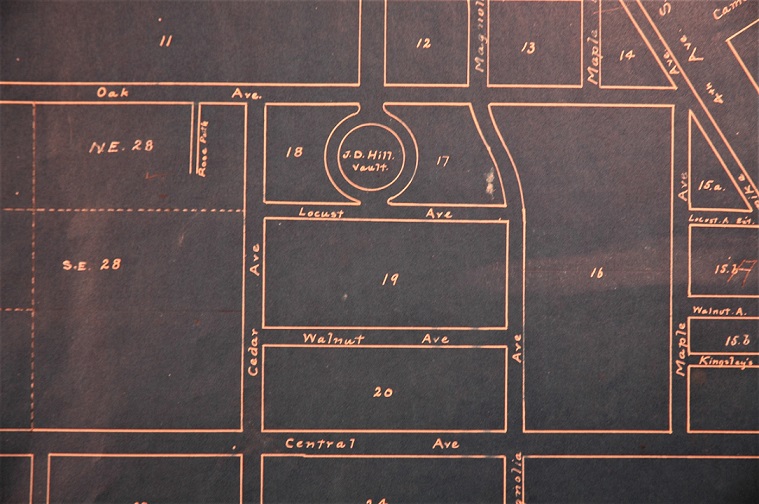 If you're interested in learning more about the cemetery, I will provide you with three recommendations...

And this post was supposed to be finished by the end of January, so stay tuned for another post later this month.