Hard to believe it's been 18 years since the Titans' first game in their new home and in their new jerseys. Throughout many seasons, players, and a couple of coaches, the team has remained a hometown favorite (well, in my opinion - my favorite) and that includes its stadium. 20 years ago this May, construction began on the field that was initially crowned "Adelphia Coliseum." Would you believe Metro Archives has several photographs taken of the construction process? If you enjoy a little Titans nostalgia like I do, check out some of the best photos below.

It'll be 20 years in May since they broke ground on the east bank of the Cumberland to build an NFL stadium to be the home of the Tennessee Titans. Moving from Houston where they were the Oilers since 1960, owner Bud Adams became interested in moving the team after he was denied the request for a new stadium. The city of Nashville had the best offer and so set the plan to move the team for the 1997 season. 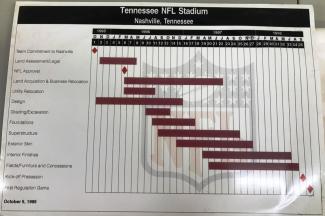 Football was intended to be in Nashville's blood prior to this decision however. Previous Nashville mayor (from 1975-1987), Richard Fulton, was interested in bringing more of a sports' presence to the city. During his tenure, a bid was organized to bring the 1996 Olympics to Nashville. Obviously unsuccessful, but that didn't stop Fulton. Close to the end of his term, a plan was discussed to try to bring a Spring Football team to Nashville but for some unknown reason, this was also unsuccessful. But thankfully, his dreams did not go unnoticed and the city never gave up.

After voters approved a $144 million bond for stadium construction in 1996, they broke ground officially in May, 1997. Despite being delayed during construction due to a tornado that struck downtown Nashville on April 16th, 1998 (see pictures of the damage in the slideshow), the stadium was still completed in 2 years time; just in time for the 1999-2000 season.

The stadium was officially opened in August, 1999, and given the name "Adelphia Coliseum" after the company "Adelphia Business Solutions" purchased the naming rights. The original contract with Adelphia was for 15 years, but that sadly wasn't meant to be when the company missed a payment and subsequently filed for bankruptcy.

Do you remember what the stadium was known as after that? Surprise, it was just "The Coliseum" for the next 4 years. But obviously that's not its name anymore; a Nashville-based company known as "Louisiana Pacific" became the next company to purchase naming rights. The company marketed itself mainly as "LP Building Products" so naturally, the stadium then became known as "LP Field" in 2006.

If you've been to a Titan's game (within the last 10 years), you'll see that at each end of the stadium, underneath/behind/somewhere near the scoreboards, several of the concession stands and restrooms were re-designed to resemble surburban homes (the exterior). Despite the most recent name change to the stadium (Nissan Stadium), those changes to the stadium are still there.

One of the main changes to the stadium with the new name is that at each entry gate now, there's a Nissan vehicle looming over them. A bit daunting but still an effective marketing idea. 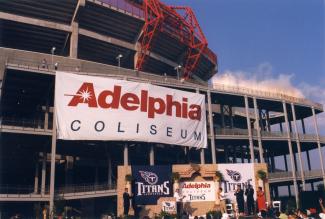 The first season that the Titans played in their new home was a great one, some fans might argue the best they've had since relocating to Nashville. As a fan, I think it's almost a fact that was our best season because we made it all the way to the superbowl, but sadly lost to the St. Louis Rams. Any other follow-up returns to the superbowl...nope, not yet.

So the inaugural season was a good one, including the famous "Music City Miracle," that took place during a wildcard playoff game on January 8th, 2000. If you're not familiar with this momentous occurrence, picture 16 seconds left in the game with the Buffalo Bills up by one point. Tight end, Frank Wycheck (now a commentator on Tennessee Titans radio network with Mike Keith), threw a lateral pass to Kevin Dyson on the kickoff return who then ran it back 75 years for the winning touchdown. Pandemonium ensues!

That was a big year for us, but we've had several great games since and optimistically, I believe we have more in our future. Check out the slideshow of photographs above to take a look back at the stadium's creation years. The photos include some of the highlights from the stadium's construction, photos of players, promotional events with the Mayor and team owner, and even a rare photograph from the first game played on the field - a preseason game against the Atlanta Falcons on August 27th, 1999.