In this country’s present political and cultural climate, there are some people who think it’s acceptable to discriminate against people who may be Muslim or from the Middle East. This, of course, is wrong. People are people, and they all deserve respect, safety, and understanding. The children's books below portray Muslims and the Middle East in the light they deserve: positive, honest, open, and respectful. 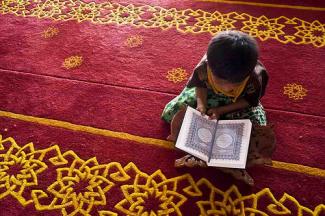 One of the most important benefits of books is that they help us get to know other people, places, and cultures. Books show us that what lies behind headlines and misconceptions and prejudices are in fact people who live and love like any other. In this country’s present political and cultural climate, there are some people who think it’s acceptable to discriminate against people from the Middle East, and those of the Muslim faith (those not are not interchangeable, by the way-not every Muslim is from the Middle East, nor is everyone of Middle Eastern background a Muslim). This, of course, is wrong; there are many Americans who are both Muslim and/or of Middle Eastern background. People are people, and they all deserve respect, safety, and understanding. The books below portray Muslims and the Middle East in the light they deserve: positive, honest, open, and respectful. They are all great to share with preschool children, and with older children as well.  Through books such as these, children-and adults-can learn to see people and not stereotypes that create misplaced fear and ignorance.

Mirror is a marvelous (nearly) wordless book. To look through it is to gaze in open-mouthed wonder at its masterful illustrations and its message. When you open the book, you will see that it is in fact two books, an English one on the left and an Arabic (remember to turn the pages right to left!) one on the right. Mirror is a look at a day-in-the-life of two boys, one living in Australia and the other in Morocco. Although they each lead different lives with their families in their respective countries, there are some things that “are the same for all families, no matter where they live.”

Author and illustrator Jeannie Baker created the multitextured and multilayered illustrations by first drawing and then making collages on top, adding layer and layer of mixed media. She used a variety of materials, including sand, clay, paper, cloth, and plastic. The images were then photographed for the book. Be sure to spend some time poring over the illustrations, catching all the details.

Books about colors aren’t always interesting. Let’s face it: it’s been done before. Golden Domes and Silver Lanterns: A Muslim Book of Colors, however, uses words associated with Islamic culture and religion, or deen, to present the colors-red, blue, gold, white, black, and so on.

Golden Domes and Silver Lanterns: A Muslim Book of Colors

A young girl shows us how she sees the colors in her world. Red is the rug her father kneels on to pray, and “blue is the hijab Mom likes to wear.”  A hijab, she explains, is “a scarf [her mom] uses to cover her hair.” The dates she eats during Ramadan are brown, “plump and sweet.” And purple is the color of the doll she gets as a gift for Eid, when the end of Ramadan is celebrated. The protagonist is shown with various members of her family throughout the book, including her grandmother and grandfather. Each color is described in short rhyming text, perfect for developing readers. The illustrations are soft and friendly, and fill up the entire page; each color, in fact, gets two pages for its description.  Finally, a helpful glossary of the perhaps unfamiliar terms is included in the book.

Silent Music: A Story of Baghdad is one of the most beautiful books I have ever come across. Colors and words and images are layered upon one another to create a visual feast for the eyes. It will also touch you and convict you and make you think. A friend tells me he cries every time he reads it to his two children.

Silent Music: A Story of Baghad

Ali lives in Baghdad, the capital of Iraq. He loves soccer, “loud, parent-rattling music,” and most of all, calligraphy-the art of writing Arabic script. Ali practices his calligraphy everywhere, “on the margins of newspapers and magazines, old envelopes and faded receipts,” the swooping letters “dancing to the silent music” in his head. His hero is Yakut al-Musta’simi, perhaps the most famous calligrapher of the Arabic language. During the catastrophic Mongol invasion of Baghdad in 1258, Yakut fled to a tower and in the midst of horror, created beauty from the “rhythm and grace” of calligraphy. Like his hero, Ali writes and writes during the 2003 American invasion of Iraq, as “bombs and missiles fell on his city.” In the midst of war, Ali “filled his mind peace.”

Ali notes that it’s easy to write the word harb, or “war,” in calligraphy. It’s much harder to write salam, or “peace.” The pen resists him, “stubbornly” so. And so it is with us. Peace requires practice and patience. War is much easier to fall into. Leaning to live with our neighbors in peace is hard work. It’s easier to put up walls. Good books, however, can help us tear down those walls.