June 1, 1796 was the birth year for Tennessee as a state. Feels like it was just yesterday. In honor of its many years since, here's a brief recap of its birth and how the state chose to celebrate each of its earned centennials.

The concept that Tennessee was once considered the western part of the country still baffles me today, especially when referring to hockey. I'll never understand why the Predators are in the Western Conference in the NHL. But it would make more sense to me if we rewound time by about 200 or so years, back to when the Mississippi River drew the western boundary line of the country for a short time. Back when Tennessee had just become a state (a difficult struggle for statehood actually), just in time for the 1796 presidential election of John Adams.

And being the month that it is, Tennessee's statehood (and Nashville's role in that endeavor) was the topic of the last "Nashville History" spring lecture series by Davidson County's historian, Dr. Carole Bucy. I attended this lecture on June 13th. Tennessee became the 16th state on June 1st, 1796. One of the things she discussed was just how much of the existing state was originally part of Tennessee. Only a small percentage of what we now know as the state existed when it joined the union; the rest including the western part of the state were Native American lands. Obviously over time, those lands were encroached upon and added to the state's territory. But that's a blog post well-worth its own entry later.

Per this lecture's teachings, here are a few fun facts: 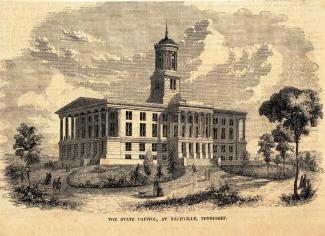 And the rest is history as they say - our capitol building was designed to model a Greek Ionic Temple by William Strickland, beginning in 1845 and finally completed in 1859 (but unfortunately not in time for Strickland to see its completion). In my opinion (and weigh this with the knowledge that I've not seen too many state capitol buildings), I think it's one of the most beautiful capitols in the country, fitting perfectly with our "Athens of the South" theme that's familiar in many of our buildings and architecture; especially (and getting to my next point) the Parthenon... 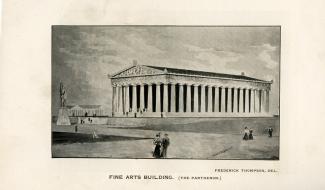 Centennial Park (hence the name) and the Parthenon were born out of Tennessee's celebration of its first 100 years. Beginning in May, 1897, it ran for six months, ending just before Halloween. Though the state's actual anniversary was a year before, it was delayed a year predominantly due to the financial panic of 1893. Though the idea for the exposition was first proposed and urged in 1892 by Nashville lawyer, Douglas Anderson, it wasn't until years later that the exposition was re-proposed with a letter to the directors of the Commercial Club, written by architect Captain William Crawford Smith. A short snippet from the opening paragraphs reads...

"Gentlemen-the financial depression and shrinkage in values in this city and throughout the country, which seems to have produced a condition of so much apathy and inactivity in commercial circles, suggests and demands that an organized effort be made to divert the attention of our own people, if possible, from the general depression, by setting on foot some enterprise that will interest them especially in behalf of our own State, and that will tend to enlist their aid and cooperation in furthering the interests of the city of Nashville in particular."

I don't think they were bothered by run-on sentences back then. In short though, the Nashville people need a distraction from their woes, so let's have a 6-month party. Sadly the exposition was not an original idea; it was modeled after the 1893 Chicago Columbian Exposition which inspired the City Beautiful Movement. The setting of the exposition in a park-like area with classical buildings and promenades inspired the Tennessee exposition, though ours was on a smaller scale.

Before it became Centennial Park, the location on the west side of town was previously the grounds of a former race track. The main purpose of the exhibition was to highlight technological progress, which included exhibits devoted to agriculture, commerce, machinery, and transportation. So with most exhibits, it was typical to see a before and after display meaning there would be an outdated contraption next to the updated technology that replaced it. In addition to emphasizing the improvement of science, technology, and education, the exhibition also featured lectures and displays devoted to the social progress of women's rights (the emerging feminist movement), racial progress for African Americans,and the "modern child".

I coughed a little bit (maybe a lot a bit) when I read that part of the women's building featured displays of "domestic arts" and "home economics," because keeping your house clean is evidently an art. But I digress again. What's notable to recognize about women's involvement in the exhibition is that Tennessee women played an important role in the planning and development of the immense project, including serving to galvanize women reformers of the progressive era. According to "The Official History of the Tennessee Centennial Exposition - Nashville, 1897", women are described as thus: "Women have been called the poetry of life; certainly women were the poetry of the Exposition."

The "Negro building" was devoted to the displays of African American products and educational achievements. It also featured lectures made by advocates of racial progress, and "Negro Days" designated to honor the "free, educated, aspiring 'new Negro." Despite the promotion of racial advancement, irony was still present with the strict segregation laws in effect.

But I mentioned the Parthenon at the beginning of this long-winded brief discussion of the exhibition, so let's get back to that so I can move onto my next topic - the Bicentennial Mall. If you're interested in learning more about the Exposition, I can recommend two websites where I received most of my information - the Tennessee Encyclopedia entry and TSLA's Virtual Archive page.

The Parthenon (or the Fine Arts Building as it was referred to then) was one of the nearly 100 structures in the Exposition, and the buildings "ran the spectrum from the ecccentric, such as those in Vanity Fair, to the splendidly ornate" - according to TSLA's page. None of the original buildings still stand today - this includes the Parthenon actually. The original structure was made of plaster and wood, and it was said to be an exact scale model of the Parthenon of ancient Greece. It remained standing until the 1920's when the current concrete building took over in its place. The original building ilding - included roughly 1,175 art objects (sculptures, paintings, and watercolors).

Other fun facts about the Exposition: 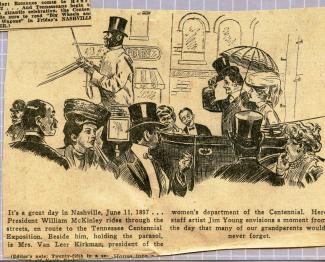 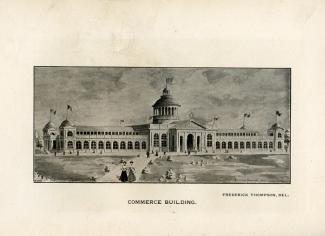 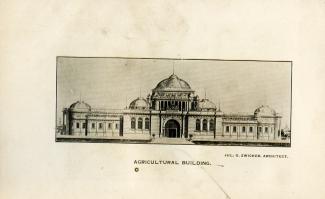 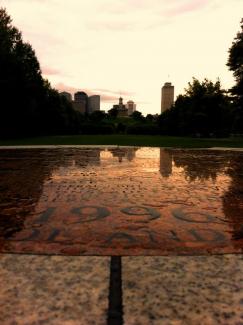 200 years after Tennessee originally joined the Union, the state again persued a celebration of its exceeding age with a park located on the north side of the State Capitol building. The Bicentennial Capitol Mall State Park opened in 1996 on land near where the original "French Lick" settlement existed over roughly 250 years ago. It opened June 1st to be exact which is our Statehood Day. I remember when it opened too, or at least when my elementary school visited it shortly after opening. I think I remember wondering where the stores were if it was a "mall." You could say I was a little disappointed.

Its location also is strategic in protecting the view of the state capitol, as the building had previously been blocked from view on 3 sides.

But this declaration of celebrating Tennessee's 200+ years is all-encompassing in covering its history, from the granite map of the state at its entrance to the 95-bell carillon at its north end (the 95 bells represent the state's musical past and its 95 counties). Fun fact about the 95-bell carillon if you didn't already know - the bells ring Tennessee-themed songs at the top of the hour, every hour and there is an answering bell. The 96th bell on Capitol Hall chimes back, in representation of the government responding to the people.

Other intriguing features of the park: 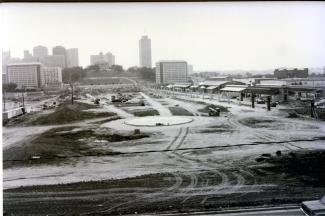 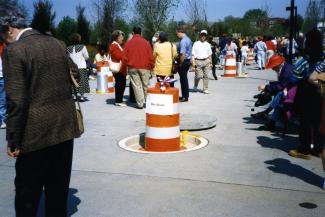 Tennessee history : the land, the people, and the culture

Art album of the Tennessee Centennial and International Exposition : held at Nashville, May 1 to October 31, 1897

A long path : the search for a Tennessee bicentennial landmark