One of our most-utilized resources here in Special Collections is the Nashville Banner clippings: articles about every aspect of Nashville life from the 1950s through the 1990s. In this post, I use Banner clippings to tell you the story of two popular types of night spot entertainment: mechanical bull riding and karaoke! 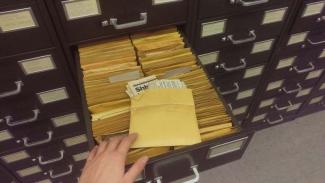 The Nashville Banner clippings were created by literally clipping articles out of the Banner and the Tennessean newspapers every day for decades. The millions of articles are categorized under broad subjects like Nashville Businesses, Davidson County Schools, Music, or Civil Rights. The articles are then further categorized under a proper name, such as Dolly Parton, Opryland, or Hot Chicken. If you take a closer look at the clippings, you’ll also find some odd and illustrative subject headings like Hippies, Abominable Snowman, Killer Bees, Streaking, Kudzu, and Life After Death. A category that captured my interest is “Nightspots.” Files on teenage dance clubs, music venues, supper clubs, and bars, these articles tell stories of headlining musicians, police raids, and the shifting atmosphere of local haunts like Printers’ Alley and Music Row. Flipping through the years, you can even see the ebb and flow of fads and litigious drama unfold between competing businesses. Two such stories that caught my eye were about the rise and fall of Mechanical Bulls and the first whispers of Karaoke. 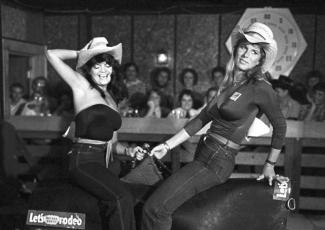 In 1980, the hit movie Urban Cowboy, set in Pasadena, Texas and starring John Travolta and Debra Winger, inspired a boom in pop-country music and a nationwide interest in all things honky tonk. The action in the film centers around the bar Gilley’s Club and it’s mechanical bull. A training machine for rodeo competitors, the remote operated bulls were also popular amusement rides at fairs, nightclubs and bars. Nightspots were wise to capitalize on the craze and invest in the barroom sport. The movie was released in June of 1980 and in July, local bar Spinners announced that it was changing its name to Blazing Saddles, renovating with a “western decor” theme, and installing an 800-pound mechanical bull in a padded corral. Owner Charles Shrader described how the bar would feature country rock and western swing music since it “seems like that’s kind of real popular right now.” He goes on to share that “if there’s something new and different that happens, and the cowboy thing goes away” he’d be happy to reinvent the bar again. Of course, walking down Broadway today almost 40 years later, it’s hard to imagine a Nashville without country music and cowboy boots! In the article, Schrader laments that Cactus Jack’s beat him to the punch, having bought their own mechanical bull a couple weeks before Blazing Saddles. Cactus Jack’s aimed to host legitimate competitions for qualified riders with significant prizes, but it wasn’t long before inebriated amateurs and “weekend cowpokes” would fall victim to the rodeo bull. In August, only a month after unveiling the attraction, Cactus Jack’s was embroiled in two lawsuits for injuries sustained while riding the bull. In 1981, an estimated 1,000 bulls had been installed around the country and orthopedic surgeons and doctors reported a rise in mechanical bull injuries, even going so far as to dub a type of muscular damage “urban cowboy rhabdomyolysis.” After riding high for a year, Cactus Jack’s ended up abandoning “the cowboy thing” and changed ownership in May of 1981. 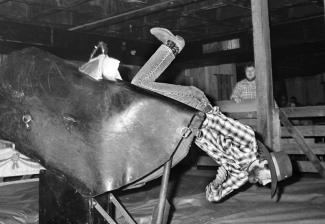 A decade later, Mickey Gilley of Urban Cowboy fame, would help usher in another fad to the Nashville bar scene. In 1991, his Music Row club and theater, Gilley’s, began offering a “video sing-along known as karaoke.” Developed in Japan in the 1970s, karaoke used “laserdisc to play music videos on video screens. The twist is, the machines used in the process remove vocals from the songs and project lyrics on the screen.” The infectious musical craze didn’t really hit the US until the 90s when it became popular in nightclubs and as home entertainment systems. Nikkodo USA, a leading manufacturer of sing-along entertainment, reported a 200 percent increase in sales in 1992 alone. Karaoke jockeys with portable machines became a novelty rental for office parties, and many churches and schools even used the technology as literacy tools. 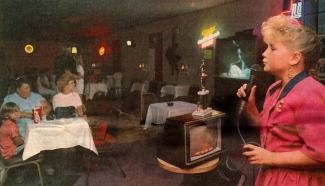 At bars like Gilley’s, the fad was instantly embraced by the “brave and the foolish.” Tipsy tourists looking for fun and young, earnest starlets hoping to be discovered would all take turns at the mic and compete in Gilley’s nightly competition (winner determined by applause). For $2, you could even get an audio cassette of your performance to revisit your shining or cringe-worthy moment. While most nightspots were content with collecting your bar tab, some clubs had an entry fee. Downtown Japanese Restaurant Ichiban charged $1 per song. Even the Country Music Hall of Fame and Museum had a karaoke machine set up for ticketed guests to sing as many songs as they like, “unfortunately,” lamented tour guide Steve Bett. “A lot of them are really good,” he admitted, “but there are two kinds of bad. There are bad singers who haven’t got a clue they’re bad, and there are bad singers who just have the desire to be on a microphone and sing.” Bett reassured that in the true spirit of Southern hospitality, everyone maintains a professional air and will tolerate those who can’t “carry a tune in a bucket.” Fads come and go, but karaoke perfectly complements and celebrates Nashville’s deep roots in song and long history of country music. I bet it’s rather unlikely to go the way of the mechanical bull anytime soon. Special Collections’ Nashville Banner collection is full of stories connecting Nashville, TN to it’s past, people, and culture and we’d love for you to come take a look! 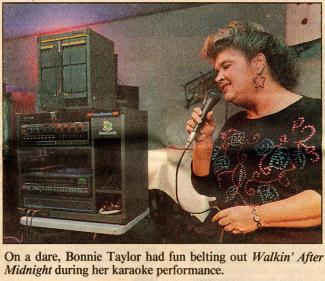