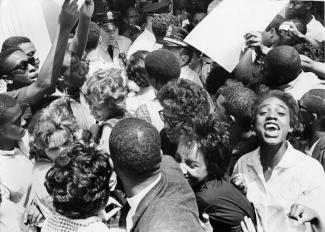 During non-violent demonstrations such as sit-ins and marches, organizers would call in the press to document their actions. Photojournalists like the Nashville Banner’s Jack Gunter had an important role in the movement because they could capture photographic evidence of discrimination and violence to show to those who denied or were unaware of the cruelty of segregation. After seeing photos of the hateful actions perpetrated by segregationists against non-violent demonstrators, much of the public could no longer turn a blind eye to the true face of racism. 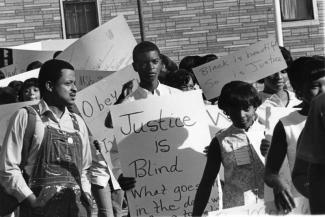 "Protest at Cameron High School," by Jack Gunter, circa 1963.

A native-Nashvillian, Jack Gunter joined the Banner Newspaper staff as an errand boy in 1948 and soon joined the ranks as a staff photographer. In 1950, he left the Banner briefly to serve as a combat photographer in Korea, sending stories and photos from overseas for special features in the Nashville newspaper. Returning in 1953, he photographed everything from politics, human interest stories, crime, and, most notably, the Civil Rights movement. During his nearly 50 year career at the Banner, award-winning photographer Jack Gunter served as the head of the photography department, assistant to the publisher, and finally, executive vice president of the newspaper before retiring in 1995. In an article celebrating Gunter’s retirement, his coworkers remembered him fondly as a joker and a thrill-seeker and shared stories of him chasing fugitives from the law on foot, and even preventing the attempted suicide of a local woman. 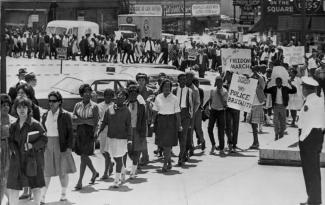 "A group of over 200 singing, sign-toting Negro and some white youths march in downtown Nashville enroute to the courthouse where they were invited inside for the trials of demonstrators arrested earlier in the week." By Jack Gunter, 1964.

In 2008, after participating in a Civil Rights photography exhibit in the downtown Nashville Public Library’s gallery, Gunter deeded a portion of his photographic work to Special Collections. These 87 black and white photographs span from 1957 to 1968 and depict well-known events from Nashville’s Civil Rights history including school desegregation, demonstrations, and the visits of Dr. Martin Luther King, Jr and Stokely Carmichael. In a 1989 interview, Gunter said that reporters strive to be impartial, but as he covered the Civil Rights Movement in Nashville, he knew in his heart he would have to pick a side. 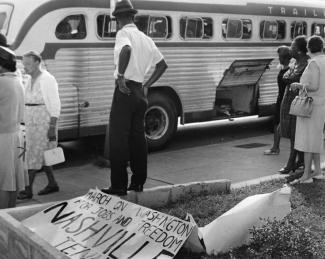 "Protestors boarding a bus in Nashville headed to the March on Washington." By Jack Gunter, 1963.

The photographer admitted that as a white man raised in a segregated society, he didn’t recognize the problems with segregation until they were pointed out to him. Speaking with black Nashvillians and witnessing their experiences inspired Gunter to support and photograph their struggle. Decades after covering the Civil Rights Movement in Nashville, Gunter continued his involvement with the Nashville African American community. In 1987, he was named as chairman of the board of trustees for the historic black school, Tennessee State University. President Otis Floyd said that he nominated Gunter because he was familiar with both black and white power structures in Nashville and had a serious concern for the University. Jack Gunter died in 2014 at the age of 85. 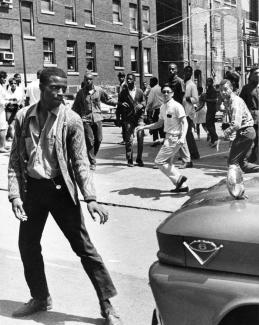 "Dr. Walter Owens and others attempt to block police intervention during demonstrations in downtown Nashville." By Jack Gunter, 1963. 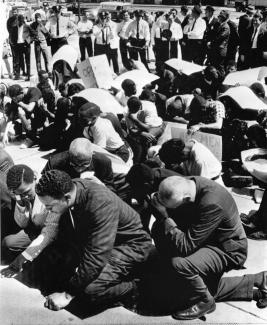 "Pray for Open City- About 50 Negro Civil Rights demonstrators kneel and pray on steps of Nashville Court House after being turned away from seeing Mayor Beverly Briley, as they began a second week of picketing downtown sandwich shops after a pep talk by Dr. Martin Luther King last night." By Jack Gunter, 1964.

We Shall Overcome: Press Photographs of Nashville During the Civil Rights Era

By Martin A. Berger

Visions and Voices : the Civil Rights Movement in Nashville & Tennessee