What Has Metro Archives Division Been Up to During Quarantine? Part I

When phase one of quarantine began in March, and we were informed that the Library and Archives would be closing to the public, all of us in Archives took home several projects to work on during this time.

Not only did we change working environments, but we also gained new "coworkers"; something we kept each other up-to-date with frequently. Especially since most of our "coworkers" had terrible workplace etiquette; for instance, one of mine doesn't understand the concept of sharing...

On the other hand, Drew's coworker does a good job sharing his workspace...

I think our "at-home coworkers" will miss us when we fully return to work, but mine will get his chair back at least.

Because each of us may have more than one project to discuss, I decided to make this a series in lieu of writing a really long blog post. In this post, I'm discussing my and Drew's projects, both involving Rep. John R. Lewis.

Nashville is the city that Lewis' activist work began, from non-violence training for sit-in protests to leading the Student Nonviolent Coordinating Committee (SNCC), and eventually becoming one of the "Big Six" of Civil Rights' leaders that organized the March on Washington, and fighting to get the Voting Rights Act passed in 1965. In honor of the invaluable impact he made on this city as well as the rest of the country, this blog post is in special remembrance of John Lewis.

My Discovery in our Collections

Archives received a large collection of unprocessed Davidson County Criminal Court case files several months ago, a little while before quarantine started, and this was initially a volunteer project to help us process them before I started working on them.

They were incredibly disorganized initially, as you see in the photo above, so we've been working on pulling them out of their envelopes, cleaning and straightening them, putting them in folders, and finally into Hollinger Boxes (acid-free archival boxes).

Pretty easy-peasy and we’ve found many important cases during this process. For example, the case I mentioned before involving Rep. John Lewis - State of Tennessee vs. Lester G. McKinnie, et al.

Quick story, first, of how I found this case. A couple of weeks ago, I was going through these case files looking for a case for a patron and happened upon a packet of papers not inside an envelope. The name "John Lewis" caught my eye and made me curious if this was a case involving a sit-in demonstration.

“…unlawfully, willfully, knowingly, deliberately, and intentionally did unite, combine, conspire, agree and confederate, between and among themselves, to violate Code Section 39-1101-7 and Code Section 62-711, and unlawfully to commit acts injurious to the restaurant business, trade and commerce of Burrus and Webber Cafeteria, Inc…”

And I thought, yes, this is definitely Rep. John Lewis and is indeed a sit-in case (and possibly the only case involving Rep. John Lewis in our records). As we keep processing these files though, we’ll be sure to keep our eyes peeled for others.

"Become Part of an Organized Effort"

But before I get into the details of the case, here's some background information on John Lewis before he was elected to Congress, serving Georgia's 5th Congressional District as U.S. Representative, in 1986.

John Lewis first came to Nashville from Alabama to attend the American Baptist Theological Seminary (American Baptist College now); after he graduated, he was ordained a Baptist minister. He then went on to attend Fisk University, graduating with a bachelor's degree in religion and philosophy.

It was while he was attending the American Baptist Theological Seminary that he began attending workshops taught by Rev. James Lawson and Rev. Kelly Miller Smith, on the importance and discipline of nonviolence.

As a founding member and eventual chairman of SNCC (from 1963-1966), Lewis was involved in several nonviolent protests including the Nashville sit-ins and the Freedom Rides throughout the early 1960’s, the March on Washington in 1963, and the Selma to Montgomery marches for voting rights in 1965.

He was arrested about 45 times, the most recent being in 2013 while protesting on behalf of comprehensive immigration reform.

The sit-ins in Nashville were his first demonstrations, and he expressed his feelings of the protest in a 1973 southern oral history program interview for UNC-Chapel Hill…

“It was a great feeling; it was my first real act of protesting against this system of segregation. I sort of had this feeling for some time that you just wanted to strike a blow for freedom and this was a great sense of pride to be able to sit down and at the same time become part of an organized effort.”

His first arrest, and the first time that he said violence broke out during the protests, took place on February 27, 1960, at the sit-in at Woolworth's on 5th Ave. The violence began by a counter-protester - a white, teenage male that began pulling the demonstrators out of their seats and dropping lighted cigarettes down their backs. The students did not strike back though, as their mission was to remain non-violent. And it was the sit-in demonstrators that were arrested that day, not the counter-protesters that incited the violence.

Though there were several sit-in demonstrations in Nashville from 1960 until the passing of the Civil Rights Act of 1964, the specific demonstration from the case file is the October, 1962 demonstration at the B&W Cafeteria in downtown.

I've read through most of the case materials, so I have a general idea of what the 8 men were arrested for and how the case proceeded. I don't fully understand all of the legal terminology so please bear with me, but here's a brief explanation of the details of the case and how it turned out, starting with a photo of an unprocessed case file that looks similar to the condition I originally found the case file in.

Facts of the Case:

“…unlawfully, willfully, knowingly, deliberately, and intentionally did unite, combine, conspire, agree and confederate, between and among themselves, to violate Code Section 39-1101-(7) and Code Section 62-711, and unlawfully to commit acts injurious to the restaurant business, trade and commerce of Burrus and Webber Cafeteria, Inc…”

On October 21st, when the demonstrators came to the B&W to conduct a sit-in protest against the cafeteria's rules, there was a security guard set up at the door, not allowing the protesters to come into the restaurant and forced them to remain in the vestibule at the opening of the restaurant. The state's argument stated that the students then blocked the vestibule, not allowing any customers to leave or enter. And pushed their way into the cafeteria, causing disorder during the restaurant's "busiest hours of business."

What's important to note about this case is that the city had already integrated lunch counters in May, 1960, becoming the first major city in the South to begin desegregating their public facilities. However, that did not include ALL public facilities, such as movie theaters, public swimming pools, and other restaurants such as the B&W Cafeteria.

In response to why they would not serve the students, the cafeteria claimed:

This means the rule the cafeteria established was to serve food only to "persons of Caucasian descent". The Defense's argument stated that this "right" to serve food to whomever they want does not exist when the private business is open to the public, and in fact that makes the "practice or custom of racial segregation" a violation of the equal protection clauses of the 14th Amendment.

Another part of the State's argument included that because there were other restaurants in the area that were integrated, there was no reason the students were there other than to conduct a sit-in to "promote disorder, breaches of the peace, fights or riots."

When the trial began, the defendants refused to give their names and they were not called on to testify. Instead, the court used a number system to identify the defendants, which they often confused by swapping seats.

After 4 days of trial (or 5 maybe), the defendants were found guilty for conspiring to violate trade and disorder. Attorneys Looby and Williams filed for a motion for a new trial on grounds that the constitutional rights of the defendants had been violated.

The motion for new trial is a document that I don't fully understand, but can say it's 10 pages with roughly 20 arguments for grounds of a new trial. One argument is that the defendants were deprived of their rights to a fair and impartial jury, since the individuals selected were all white males that admitted to their beliefs of complete racial segregation.

I believe this motion was denied because the next step was an appeal to the State Supreme Court.

On January 8th, 1964, the State Supreme Court upheld the conviction, with the opinion of Justice Hamilton S. Burnett being:

"We hold that these defendants cannot interfere with the B&W's trade by blocking the latter's entrance in order to redress a wrong that they feel that the cafeteria has visited upon them."

Next came the U.S. Supreme Court where the conviction was overturned in April, 1965. It was a split decision, but it also marked the end of all litigation over Nashville demonstrations at several restaurants between 1962 and 1964.

"Any future cases involving demonstrations would be on disorderly conduct charges, if such conduct occurred."

And in reversing the county court's opinion, the Supreme Court sited its ruling which went along with the decision upholding the public accommodations section of the 1964 Civil Rights law. See the statement of judgment below.

Quite an important case, you see. And we're working on a video project with this case file currently as well, showing the proper steps of cleaning and processing important documents. Stay tuned for that!

My coworker, Drew, has been working on scanning Metro Photographer negatives throughout quarantine. It's quite a large collection of negatives, circa 1950's - 70's perhaps, and only a portion of them are scanned.

We have a binder of negatives of the Civil Rights Movement that have been partially scanned, so that's something he worked on while at home - scanning as many more of the negatives as he could.

Sadly, most of them do not come with any descriptions or dates, so we're doing our best to identify individuals, places, dates, and any other details possible from the scanned photos.

A couple of the photos include Rep. John Lewis as well, during various demonstrations in Nashville.

Without further ado, check out a few of the scanned photos in the slideshow below... 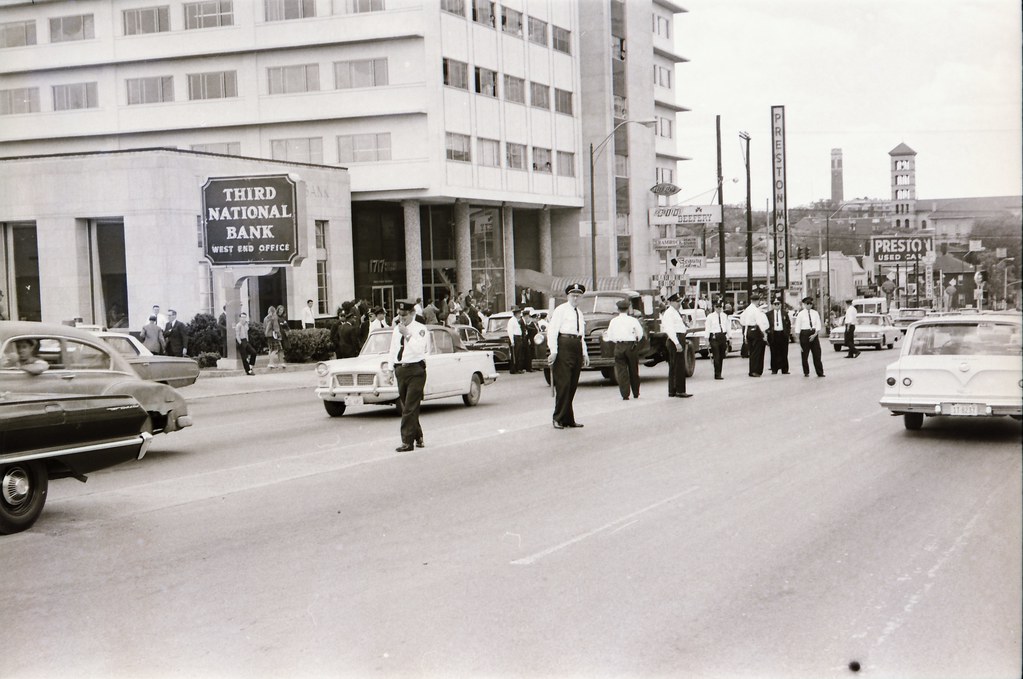 Part II of the series features projects that Ken and Kelley worked on throughout quarantine.