Southern Festival of Books returns to NPL for 30th Anniversary

Every October, the Southern Festival of Books: A Celebration of the Written Word, turns our “it city” into “lit city.” With three days of thoughtful, exciting programming, this event has long been a fall-time favorite, appealing to more than just bookworms. I investigated the roots of this community-building festival using primary and secondary sources from NPL Special Collections. 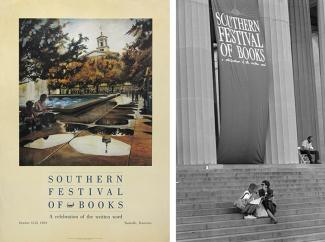 The Southern Festival of Books was inspired by two other successful events: The Homecoming ‘86 Literary Festival and the Miami Book Fair. Developed under Sen. Lamar Alexander, Homecoming ‘86 was a state-wide celebration of Tennessee heritage. The project encouraged communities to research their local history and create lesson plans and events to celebrate and enhance it. Alexander tasked executive director Robert Cheatham of the Tennessee Humanities Council with organizing the Homecoming Literary Festival. With the help of writers and educators John Egerton, Michael Zibart, Diane Hayes, and state historian Wilma Dykeman, the Council developed a two day symposium of workshops, readings, and panel discussions to celebrate Tennessee writers. Alex Haley, the author of Roots, chaired a panel on oral and ethnic traditions while musician Tom T. Hall held a session on folklore, legend, and song with Emmylou Harris and Minnie Pearl.

The Literary Festival was well-received and another was held in 1987 in conjunction with the Annual Book & Author Dinner sponsored by The Tennessean. That same year, Egerton and Zibart attended the third annual Miami Book Fair and were impressed by the scale and fun atmosphere of the event. They approached Cheatham about creating an annual event that kept the educational and cultural components of the Literary Festival but added more festive elements including children’s activities and a special emphasis on cookbooks because, as a Tennessean editorial writer noted, “with the possible exception of Bibles, no other form of bound printed matter is as widely distributed in the South as cookbooks” (“Southern book event,” 1989). The festival would also tie in local events like the Book & Author Dinner and the Hugh Walker Antiquarian Book Fair. At the 1988 Book & Author Dinner, Egerton announced the inception of the Southern Festival of Books—an event intended to bring together and celebrate the existing literary community while encouraging reading and bringing books “back into the lives of people who have been watching television for the last generation” (Moore). 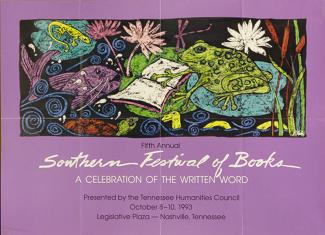 The first festival in October of 1989 boasted 75 exhibit booths from national publishers and booksellers and the involvement of more than 100 authors, including Rosalynn and Jimmy Carter. In the spirit of Homecoming ‘86, a special one-day artist-in-residence program called “Festival in the Schools” was implemented, bringing children’s book authors and illustrators to classrooms. On-site, a special outdoor stage and kitchen dubbed “Culinary Corner” served as an area for cooking demonstrations from Julia Child and other well-known cookbook authors. A children’s area was set up for storytelling with the Grassland Seedlings and there were multiple author talks and panels occuring every hour of the three-day event. The organizers strove for diversity and the "Black Writers Panel" with Tina McElroy Ansa, Blyden Jackson, and C. Eric Lincoln was one of the more popular events.

Having grown out of Homecoming ‘86, the decision to organize programming that highlighted Southern letters and culture seemed natural. Also, the organizers, most notably author John Egerton, were themselves dedicated to chronicling the South and its inhabitants. Although later Cheatham would make a special point to insist that “this is the Southern Festival of Books, not the Festival of Southern Books,” the South’s intimate relationship with storytelling, folktales, and legends is undeniable (Wyatt). Furthermore, the organizers were wise to recognize that Nashville, “Music City,” was a natural host for a book festival because it has always attracted people who had literary talent. For decades songwriters have migrated to this publishing hub to find their fortune while others, similarly drawn by country music stardom, have settled here as a dedicated audience. Nashville was a city tailor made for a literary fest.

Immediately, the Southern Festival of Books was a big hit, drawing nearly 40,000 people to the second festival in 1990. In 1998, the audience grew nationally with nine hours of live coverage of the festival on C-SPAN2’s Book TV. Today, the festival attendance is in the higher end of 30,000, with around 300 authors, 80 publishers, and 50 panels. When scheduling the authors and events, organizers attempt to keep a delicate balance between highbrow and lowbrow—edification and fun. For instance, one could see panels with Kitty Wells and Betty Friedan on the same day in 1994. In 1992, visitors could stand in line to get an autograph from Jimmy Buffett before heading to a talk with John Preston, the author of Speaking the Unspeakable - The Literature of AIDS.

The Southern Festival of Books is eager and willing to court delicate subjects. In 1990, Robert Wolf of Free River Press did a reading from his book of poetry composed by people experiencing homelessness. Wolf was also aware of the magnetism of Music City, and he saw that not everyone who came to seek their fortune succeeded. His collection, Five Street Poets, came together after he held a writing workshop at Matthew 25, a nonprofit assisting homeless men. In 1991, the 200th Anniversary of the Bill of Rights, organizers decided to commemorate the signing and made Personal and Civil Rights the focus of the festival. Lewis Baldwin and Zora Neale Hurston chaired panels on the Civil Rights Movement while Gloria Steinem, Patricia Hill Collins, and Elizabeth Fox-Genovese discussed Feminism and the Women’s Movement. Gene D. Lanier, the liason to the Intellectual Freedom Committee of the ALA, led a panel on Censorship in schools and helped develop programs on the First Amendment with Tennessee high school and university teachers. Every year since, the organizers have embraced topics that would spark topical conversations. The 2015 festival included an “Understanding Islam” panel while in 2016, in twenty sessions, panelists explored how our racial identities shape us as individuals and as members of the community.

Of course organizers also strive to keep the festival festive with stages for theatre and music, food trucks and most recently a Beer Garden. This year, Watkins’ Handmade & Bound, an event celebrating the craft of books and zines, will interest those who are intrigued by DIY arts. Current Director of Humanities Tennessee Serenity Gerbman explains that she wants to appeal to as broad an audience as possible, allowing anyone to “come to the plaza and pick up a program and find something they are interested in” (Hance).

This year, the festival will be held October 12-14. The Main Nashville Public Library has been the primary host for festival panels since our opening in 2001 and this year is no exception. Download a printable calendar here and join the celebration! 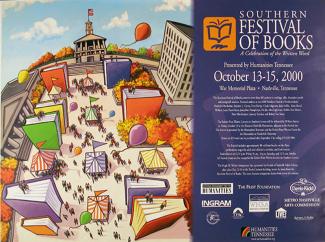 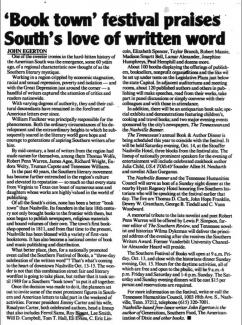 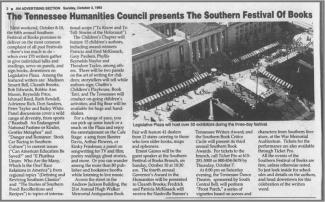 Meet me on the plaza : twenty five years of the Southern Festival of Books.

Southern food: at home, on the road, in history

Whatcha mean, what's a zine? : the art of making zines and minicomics

Dust tracks on a road: An Autobiography

Where is Joe Merchant? : a novel tale

Speak now against the day: The Generation Before the Civil Rights Movement in the South

There is a balm in Gilead : the cultural roots of Martin Luther King, Jr.

The acts of life : tales