The Nashville Room has a small exhibit of photographs to celebrate the availability of a new collection documenting the activities of the YWCA Blue Triangle Branch. Come see our resources! 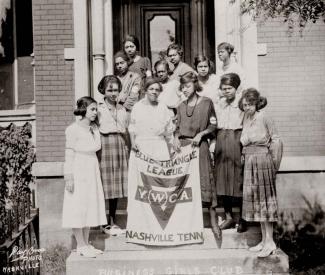 The YWCA Blue Triangle Branch Collection includes photographs, newspaper clippings, and programs from 1919 to 1980 documenting the influential African American group’s social uplift efforts and struggle for equality. The Young Women’s Christian Association originated in England in 1855 when Lady Mary Jane Kinnaird founded a home in Northern London for single women who were travelling to the city from rural areas to join the industrial workforce. Our own downtown Nashville YWCA opened in 1898 for white women who worked in factories and offices and had no safe options for overnight housing or off-hours leisure time. In her book, Women Helping Women, The YWCA of Nashville, Carole Stanford Bucy describes the facility as a “homelike place to go” with opportunities for personal enrichment, religious study, entertainment, exercise, friendship, and volunteering. The all-female board of directors of the Nashville YWCA first discussed the idea of extending services to African American women and girls in 1907 but felt that prejudice and the stronghold of Jim Crow was too pervasive in the South to do so. By 1912, President of the Board Kate Trawick announced that the societal mistreatment of black women was morally wrong and that it was her Christian responsibility to reach out to them through the YWCA. However, she did not believe in racial integration. Trawick believed that the best form of “interracial cooperation” was for the Central YWCA to provide the funds and advice for the creation of a segregated branch. Of course, given the high concentration of churches and historically black colleges and universities within the Nashville city limits, there were already a number of successful African American women’s clubs. Trawick invited women from these groups to form a board for the African American YWCA branch, the Blue Triangle, and installed them in a separate facility at 5th and Gay Street in 1921. Marian M. Hadley, the former head librarian of the Negro Branch of the Carnegie Library, was designated executive secretary and she and her committee endeavoured to have a democratic organization with all-black leadership. However, Trawick seemed to not trust them to make “acceptable decisions” and would attempt to influence votes. When African American board member Mary E. Jackson was voted in as secretary by the Branch, Trawick intervened. The Branch would have needed outside funds to retain Jackson’s salary and, as Bucy writes, Trawick was “fearful that the Blue Triangle Branch would become autonomous like the colored YMCA” if the Central YWCA did not provide their full financial support. Frustrated by the paternalism exhibited by Trawick and her board, Hadley eventually resigned. Despite the Central YWCA’s wish for complete monetary control over the Branch, in 1927, the Blue Triangle’s Committee of Management and Secretaries succeeded in fundraising enough money to cover the final note on the 5th and Gay Street location themselves. 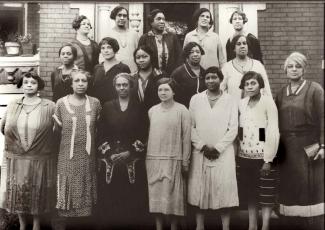 Committee of Management and Secretaries who paid the last note on the purchase price of the building in June, 1927, YWCA.

In the 1930s, the Blue Triangle Branch Committee wanted better representation at official Association board meetings and requested to attend. The Board agreed, effectively integrating the meetings. In her book, Bucy suggests that the economic trials of the Great Depression forced the Central YWCA Board to recognize that black and white women had many of the same struggles. However, even as economic hardship, domestic violence, and mental illness began to emerge as serious issues for women in Nashville, the Central YWCA was extremely reluctant to meet the changing needs in the community. With most of its funding coming from member dues and church contributions, the Central YWCA maintained that they were a Christian women’s social club, not a welfare movement. The group would provide assistance to emergency cases and to families of soldiers, and continued to organize volunteers and Red Cross training, but they were mostly interested in appealing to the tastes of middle-class white women who earned wages and could contribute donations. They were also forced to compete with the YMCA over recreational services. As the more prosperous, male-centric organization began expanding and offering family rates and coed classes, the Central YWCA attempted to raise funds so that they too could open additional facilities, but they simply didn’t have the money. Regardless of their economic struggles, the YWCA would not end the segregation of their facilities and combine their resources with the African American Branch. 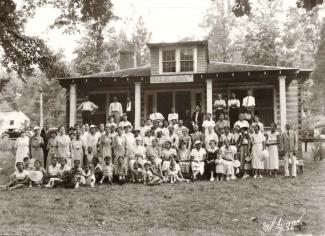 Bucy counters that in the 1950’s, the YWCA was considered to be “far ahead of other Nashville organizations in attempting to address problems of racial tension.” Indeed, together, the Central YWCA and the Blue Triangle Branch held interracial committees, hosted political and international speakers, and promoted interactions between women of both races. Bucy suggests that societal pressure influenced the YWCA to maintain separate public facilities for white and black women. Regardless, the Blue Triangle Branch seemed to be doing well enough on their own. While the Central YWCA shied away from social work, the Blue Triangle leaned in. The YWCA's underlying structure, a homelike place for women working downtown, took on a special meaning for black women who were impacted by Jim Crow restrictions on public places. To them, the Blue Triangle Branch represented safety and security and they turned to the Branch for practical assistance during times of struggle. While Central YWCA developed leisure classes to appeal to middle class white women, such as sewing, party giving, and modeling, the Blue Triangle Branch developed a Baby-Sitters Club for Teens, services for unwed mothers, a Fellowship Club for those dealing with mental illness, and held classes for illiterate adults. The Blue Triangle established a presence in different neighborhoods with outposts at various local housing units. These groups would provide young adult activities and extension courses, such as typing and shorthand, evening classes for adults, pet care, and the mechanics of politics. In 1953, the Branch moved out of 5th and Gay and purchased a building on 18th and Pearl with a large assembly hall so that they might continue hosting their own fundraising events. 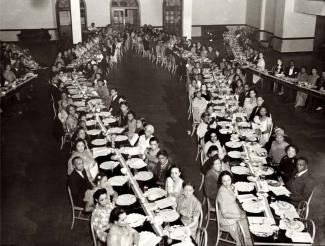 Although Brown v. Board of Education officially ended segregation in schools in 1954, like many cities in the South, Nashville did not begin to integrate until 1957. The city of Nashville continued to observe the custom of segregated public spaces until 1960, when public demonstrations organized by African American college students put pressure on Mayor Ben West to denounce the practice. Although there had been “a growing spirit of cooperation” between Central YWCA and the Blue Triangle Branch throughout the 50’s, when the African American Branch asked for permission from the executive committee of the YWCA to use the swimming pool and gym on 7th Avenue, they were denied. The issue of segregation came to a head in October of 1962, when eight African American student nurses from Memphis made a reservation to stay at the Central YWCA. Bucy explains that when the young nurses arrived downtown and attempted to check in, they were told there had been a mistake in the reservations because that location was “for white girls only.” Doris Outlaw, the director of the Blue Triangle, was appalled and wrote an article published in the local African American newspaper 780 Countdown exclaiming that she was dissapointed "that the YWCA missed again the most wonderful opportunity to stand up and be counted as a Christian organization with a Christian purpose.” In reaction to this outburst, the Associated Board of the YWCA ousted Outlaw and stripped the Branch Committee of any authority over the Blue Triangle Branch. Eleven women from the Branch Committee formed a group called The Committee of the Concerned and began publicly protesting and calling for the full integration of the YWCA. In 1963, the Associated Board agreed to integrate and appointed former Blue Triangle director Carrie Hull as the first African American board member of the Nashville YWCA. In 1964, the Central YWCA and the Blue Triangle Branch merged under one executive director. In 1967, the Central residence was integrated and the following year, the Blue Triangle Branch location became known as the Pearl Street Center and was utilized as a headquarters for neighborhood children's activities. That building was later sold to the Grace M. Eaton Day Home in 1974. 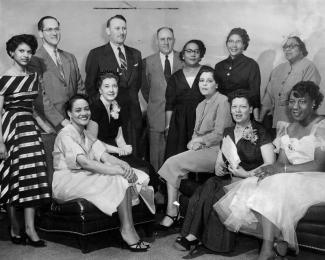 Today, Nashville and Middle Tennessee’s YWCA has continued on the path laid out by the Blue Triangle Branch and is extremely active in their role as an intersectional social justice agency. In their mission statement, they write that they are dedicated to “eliminating racism, empowering women and promoting peace, justice, freedom and dignity for all.” The current president and CEO, Sharon K. Robertson is African American and leads a diverse team of staff and board of directors. Together, they operate the Weaver Domestic Violence Center, the largest emergency shelter in the state of Tennessee. The Nashville YWCA was most recently in the news advocating for the clemency of sex-traffiicking victim Cyntoia Brown. It is heartening to see that although the Blue Triangle Board and community was folded into the larger YWCA organization, their values and ideas for outreach are still an integral part of the YWCA’s mission. As we study the Civil Rights movement and celebrate the equity won with integration, let us not forget the great instances of organization, leadership, and culture that developed within the constraints of segregation. 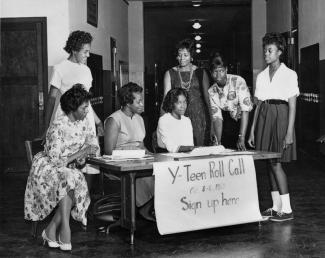 The social origins of the urban South : race, gender, and migration in Nashville and middle Tennessee, 1890-1930

The African-American history of Nashville, Tennessee, 1780-1930 : elites and dilemmas

The devil in the white city: [murder, magic & madness and the fair that changed America]