The Nashville Room's Special Collections wing is home to many invaluable resources, including a collection of nearly 200 oral histories about the 2010 flood. 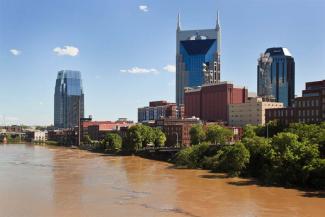 "Nashville from the Northeast, West bank of the brimming Cumberland," by Jon Erickson, May 3, 2010; Flickr.

Last month, persistent rain and flash flood warnings had many Nashvillians remembering the devastating flood of 2010 when Middle Tennessee had an average of 14-15 inches of rainfall over a 36-hour period. Comparatively, between Jan. 1 and Feb 20 of this year, we’ve only had 11.37 inches of rain. Over the weekend of May 1-2, 2010, the Cumberland River rose to 53 feet, 13 feet above flood level. This remains the highest level recorded since the dam system was built in the late 1950s. Rising creeks and tributaries throughout the area caused more than $2 billion in private property damage and $120 million in public infrastructure damage with Bellevue being one of the hardest-hit communities. Sadly, it was also reported that flash flooding took the lives of 26 people in Kentucky and Tennessee, including 11 people in the Nashville area. 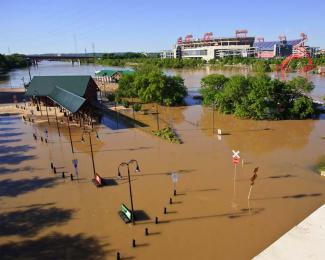 The flooding caused major damage in 52 Tennessee counties, threatened clean water sources and reliable electricity, and caused catastrophic heartbreak for so many. Locals reported some bizarre, almost surreal scenes as they surveyed the damage- a portable classroom floated down a stretch of flooded interstate I-24, crashing into abandoned, submerged cars, the Titan’s field at Nissan Stadium filled up like a swimming pool, and Opry Mills was flooded with 10 feet of water, closing the 1.2 million-square-foot mall for nearly two years. Nashvillians joked that the barracudas and tropical fish from the mall’s Aquarium Restaurant were now loose to breed in the Cumberland. Although much of downtown Nashville was cordoned off by police, people could still walk across the pedestrian bridges and in some places, right up to the edge of the murky flood waters. The Country Music Hall of Fame and the Schermerhorn Symphony Hall sustained millions of dollars of damage, with 24 feet of water filling the basement and first floor of the Symphony Hall, destroying two Steinway grand concert pianos. 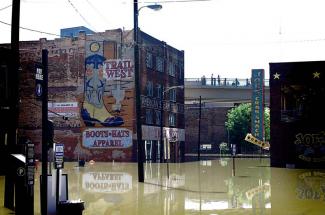 Nashvillians accused the media of being slow to respond with attention and national aid because they were dedicating so much air-time to the ongoing saga of the Deepwater Horizon oil spill disaster. Before FEMA or the American Red Cross could arrive, the city was forced to act quick and organize their own clean-up efforts through church-groups and non-profits. Immediately after the flooding subsided, Hands On Nashville reported that 12,000 people signed up to help. Private citizens with boats and jet skis joined Metro first responders and ventured into flooded neighborhoods together evacuating more than 700 victims. Mayor Dean’s office later estimated that in all, 29,000 volunteers showed up to help salvage what they could of their communities. Local country musicians used their star power to raise millions of dollars for the area. Garth Brooks donated all of his proceeds from a month's worth of concerts to create The River Fund while Tim McGraw and Faith Hill organized the "Nashville Rising" benefit concert with musicians Miley Cyrus, Miranda Lambert, Lynyrd Skynyrd, Taylor Swift, and Luke Bryan. By the end of the year, although much of the area appeared as though it were back to normal, businesses and individuals felt the financial and emotional effects for years to come. Through the pain, Nashvillians tend to remember it as a time when good samaritans and everyday heroes worked together as a community to help one another recover, rebuild, and rise. 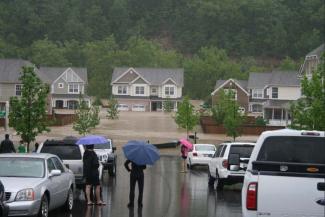 Recognizing that this was an historically significant event (statistically a 1000 year flood), Nashville Public Library’s Special Collection staff charted out a detailed project plan to begin recording the action immediately. In May, while the city began to mobilize relief efforts, staff struck out to collect ephemera from businesses affected by the flood and from organizations with events focused on flood relief. In October, Mayor Dean and then-Library Director Donna Nicely announced the next phase of the project - collecting stories from volunteers, government officials, first responders, musicians, and artists. Mayor Dean was the first person interviewed for the project in January of 2011. The Nashville Flood Digital History Project Flickr page was launched soon afterwards and now contains over 900 photos shared by community-members. The project resulted in 174 oral history interviews conducted by library staff. These tapes and some transcripts are available for researchers to peruse in the Nashville Public Library Special Collections wing and you can also hear some audio clips on the collection's webpage.  In these interviews, the contributors discuss volunteerism, rescue efforts, the rebuild process, and disaster relief. 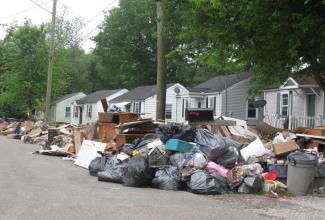 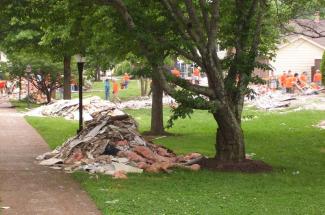 "Volunteers from Service International and Hands On Nashville in River Plantation," by Kelly Evans; Flickr.

By Public Library of Nashville and Davidson County

Take my hand: how Nashville united in the wake of the 2010 flood.