Some of what Gary Layda saw...

New exhibit of Gary Layda's photography at Main showcases change in Nashville from the 1980s to the 2010s. 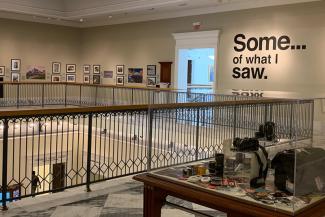 For three decades, Gary Layda served as the official photographer for the Metropolitan Government of Nashville and Davidson County. While Layda admits that sometimes his assignments bordered on the mundane, he knew that he was fulfilling a higher duty as the governmental visual historian and preserving Nashville’s past through photography. Layda has donated much of his work to Special Collections and for this solo show, “Some...of what I saw,” he thoughtfully selected 84 images to illustrate Nashville’s steady development from 1983 to 2013. The photos and accompanying descriptions are organized loosely along a timeline of five mayoral administrations and discuss how each mayor lay groundwork for the popular appeal, growth, and success of our “It City.” Reading these in-depth histories gives you a crash-course in urban development as well as a look into what Nashvillians view as important community values. 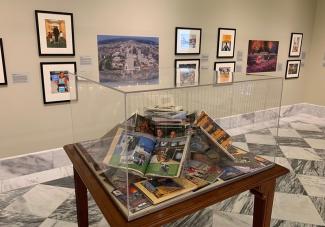 A display of Layda's work in print. On the wall is an image of Mayor Purcell visiting Don Mills Elementary School in 2004.

High among those community values is the celebration of diversity. In the 1970s, Mayor Richard Fulton introduced an International Festival to celebrate immigrants and their different cultures. Mayor Karl Dean continued this tradition in the 2000s with the Celebration of Cultures Festival. As an illustration of his commitment to education, Mayor Bill Purcell’s own children went to public schools in the 1990s. He also made it a point to visit every school in the district at least once. Although Mayor Bill Boner insisted he didn’t want to simply be known as the “trash mayor,” it is thanks to him that every home in Davidson county can participate in curbside recycling. 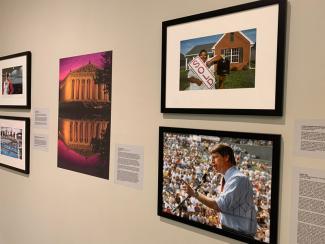 Tennessee tree-huggers also owe a thank you to Mayor Phil Bredesen who had the foresight to purchase farmland along the Cumberland River for Shelby Bottoms Park and greenway. Indeed, Mayor Bredesen is forever in my debt for building five public library locations while he held office, including the Main Library. Of course each mayor had a hand in grooming our downtown area into a welcoming and exciting spot for tourists, but they also knew that a city’s success is contingent on people’s willingness to move in, invest, and call that city home. Please come check out this amazing exhibit and spend some time learning more about our home, Nashville! 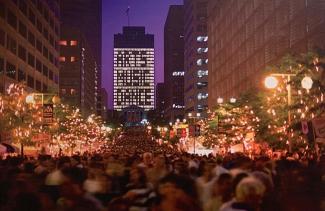 The Tennessee Tower during the "Summer Lights," fest 1993. 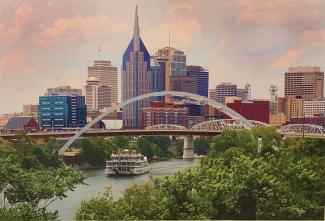 "General Jackson and the Nashville Skyline." By Gary Layda, 2007.

Recorded in Nashville : a visual record by the city's early photographers : an exhibit, September 1980, the Parthenon, Nashville, Tennessee

By Junior League of Nashville